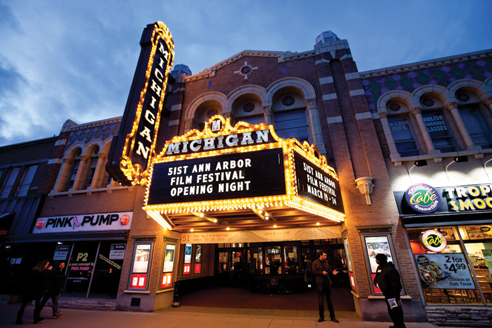 Every spring Ann Arbor throws a party. Glitterati come to Washtenaw from all over the globe to watch and perform. The theme of this party is independent filmmaking, and it’s the oldest and best of its type in the world. Just ask Andy Warhol, Yoko Ono, Gus Van Sant, Barbara Hammer, Devo and George Lucas, all of whom have shown their early work here.

This year, Ann Arbor Film Festival “52” celebrates with two more astonishing filmmakers who will show their films in person, leading the illustrious lineup of international artists. Thom Andersen is the creator of the 2003 documentary masterpiece “Los Angeles Plays Itself.” And Penelope Spheeris will feature her 1980 punk rock documentary “The Decline of Western Civilization” – so dangerous that the police chief of LA asked her not to screen it.

“Los Angeles Plays Itself” is an absorbing compilation of film clips from scores of movies filmed in Los Angeles over the last 100 years. Andersen pays homage to the architecture and the filmmakers, accompanied by succinct commentary on the sociological and cultural messages we are seeing. As you’re watching, you’ll also want to go back and see the films depicted, like “L.A. Confidential,” “Chinatown,” the original “Dragnet” and the stark, dystopian “Blade Runner.” (You’ll also marvel about how so many characters could afford breathtaking ocean-side homes, whether they were villains, police officers, or store clerks.)

“Los Angeles Plays Itself” has not been widely distributed, with concerns raised about Andersen’s “sampling” from so many commercial movies. However, citing protection from the Copyright Act’s “Fair Use” doctrine, Anderson is currently arranging for a release on DVD. In the meantime, Ann Arbor Film Festival goers, to not only see the film – but also to participate in a Q&A session with Andersen afterwards – is a rare treat indeed.

Penelope Spheeris, who has stayed true to her indie roots despite finding commercial success directing mainstream movies like “Wayne’s World,” filmed “The Decline of Western Civilization” in 1979 and 1980 Los Angeles, on the cusp of the punk rock movement.

“The Decline of Western Civilization” was the first of a trilogy; part II was about the L.A. glam metal scene, while the third part, filmed in the late 90’s, chronicles the “gutter punk” lifestyle of Los Angeles’ homeless teenagers. Spheeris will also be on hand at the Ann Arbor Film Festival, to show parts I and III; the latter has never been released.

Festival Program Director David Dinnell remembers seeing Part I on a bootleg VHS as a teen, being blown away by the raw realism. He calls Spheeris “prescient” in her depiction of non-mainstream culture, and not just in the “Decline” series, observing that “her early 1970s films ‘I Don’t Know’ and ‘Hats Off to Hollywood’ anticipate a lot of contemporary films that play with the boundaries of fiction and documentary, as well as depicting an emerging queer culture of the 1970s.” Those shorts screened at the Festival in 1971 and 1973; and having been recently restored by the Academy of Motion Picture Arts And Sciences Film Archive, they will be presented again this year.

Executive Director Leslie Raymond made her first film in elementary school – an animation with a meticulously crafted soundtrack – and she’s never looked back, dedicating herself to film studies in college. Since then, she has not only shown work in the Festival, but won two regional awards – and rose to Executive Director over 22 years, after beginning as an intern in the 30th year of the Festival, back in 1992.

Yet Raymond is just as enthusiastic about the Festival’s non-film offerings, explaining that there is a “tradition of showing extra work.” Former director Ruth Bradley called these other multi-media presentations “supercinematics,” including interactive art installations in the Michigan Theater lobby and nearby storefronts, and the Festival’s chic ‘after party’. Dinnell adds that the “grand idea is to transform the [Michigan Theater] space into something extraordinary, to open people up to what they will see on the screen.” With the installations, artists participate equally in the Festival with the filmmakers.

One featured artist is Phill Niblock, whose four-channel video and sound installation, “The Movement of People Working,” will be installed at the Work Gallery, March 19th (with a reception) and run through April 5th. Three projected images and one video monitor will feature Niblock's films of people performing manual labor, recorded throughout the world from the 1970s through the ‘90s, accompanied by the sound of Niblock's microtonal compositions. 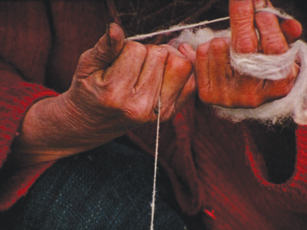 But the films are what have kept people coming back for, 52 years running – the largest and most respected experimental independent film festival in the world. Dinnell remembers being at film festivals in Poland, Germany and the Czech Republic where he met people extolling the reputation of the Ann Arbor Film Festival. He says that because Ann Arbor’s Festival is more independent of government funding than its counterparts, it can be more cutting edge – but he also notes that “what seemed radical in the past, is now familiar” in mainstream media.

The Festival committee will sift through about 3300 submissions from over 60 countries, and winnow that amount to about 140 that will be shown and evaluated by the jurors. The Festival began in 1962 exclusively for 16mm entries, then expanded to include 35mm and, since 2004, digital. Raymond recalls that “many people were reluctant to open the festival to new forms of moving image art, but when they realized the huge potential of image manipulation with digital, they became open to the possibilities.”

Raymond continues, “People come to the festival for the experience of going to places they’ve never gone, in a way they’ve never gone.” While many will come for one evening of shorts or a longer feature, the best – and most economical way to attend – is to purchase a pass. An all-festival pass will entitle the bearer to a cornucopia of events over six days, at a cost of only $95 – about a 75% discount from tickets purchased  individually. A weekend pass is also available for $55. Further discounts are available for students, seniors, and Ann Arbor Film Festival members.

The biggest crowds are for opening night and the Saturday programs, but other popular events include the Saturday morning family-friendly program, Friday night animation show; the highly anticipated documentary “From Deep,” intersecting hip hop and basketball; and an “Out Night” on Wednesday, featuring LGBT-themed films.

Perhaps the brightest stars will be out for the live presentations by Thom Andersen and Penelope Spheeris. Among all the Festival’s offerings, from short to long, animation to image manipulation, 16mm to digital, the loudest buzz in the 52nd Film Festival is about “Los Angeles Plays Itself” and “The Decline of Western Civilization.” Despite their acclaim, they’ve not played to wide audiences – so local viewers will have a rare opportunity to see something that even the most hard-core film buffs have not.

For our full interview with Penelope Spheeris click here.