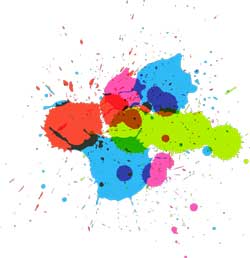 The Ann Arbor Art Fair engenders fierce pride. The event brings much to love with it—artists from all over the world, national attention, and a festival atmosphere the third week of every July. But some of that pride is perverse. A few vocal Ann Arbor residents trumpet their intense dislike for the annual event, citing their complaints as: crowds, traffic, or most egregiously, commercialization of art. There is also reflexive hate, the same sort that incites people to stop liking songs when they become popular. The reasoning, “Art Fair is for the masses. Therefore, I, who do not walk the common path, fold my arms, harrumph, and judge it harshly.”

A pre-Art Fair purist was Théophile Gautier, the French writer, who argued “l’art pour l’art” (“art for art’s sake”), which became a 19th century Bohemian battle cry against the commercialism of art. Retorted French novelist George Sand, “L'art pour l'art is an empty phrase, an idle sentence. Artists have a "duty to find an adequate expression to convey it to as many souls as possible," ensuring that their works were accessible enough to be appreciated. In this way the Art Fair gets assailed from both sides. 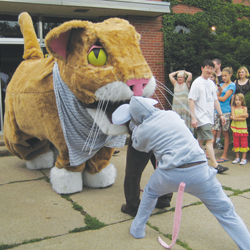 It’s About the Art
Art Fair originated in 1960 as a showcase for art. In 1961, the artist application fee was $1. Individual artists participated along with the Ann Arbor Potters Guild, the Ann Arbor Women Painters, and the Ann Arbor Handweaver’s Guild. Artists then were inspired by the beat generation. They hung their work on pegboards, drank beer, and listened to Allen Ginsberg and John Coltrane. At www.artfairinsiders.com, one artist fondly remembers selling hundreds of dollars worth of photographs to author Elmore Leonard.

Jury Process
The Street Art Fair, the “Original” from those early days on South University, since 2003 surrounding Burton Carillon, has been ranked the #1 juried art fair in the United States, and consistently ranks in the top 10. Executive Director Maureen Riley describes, “Over the course of five days each February, approximately 20 art professionals review and score 700-800 applications in media specific panel sessions. Because of this rigorous jury process, and the fact that the Street Art Fair invites 198 artists, much smaller than many art fairs, we are able to present consistently high-quality, original artwork. Most of our artists are also represented by galleries and several have work in museum collections.”

Japanese photographer Takashi Yamashita, accepted by the Street Art Fair, is participating in his first Ann Arbor air. Yamashita, whose art sprung from his work as an architect “to complement what is lacking in architecture,” writes: “My photos are there to question what one sees or one thinks he/she sees, that is, with westerners’ eyes. My art work focuses on the eastern or more specifically philosophy of Japan. The photos are very vague and the closer you get you will lose the whole of what you are looking at. They are not meant to be seen with the analytical eyes of the western philosophy.  One needs to become a part of it using all his/her senses.”

But Yamashita is also a realist. He admits, “It would be nice to have as many people as possible to visit my booth and experience my art work. I want to sell as many pieces as possible.”

It’s About the Merchants
The Ann Arbor Art Fair has always represented a tenuous partnership between local businesses and artists. It was the brainchild of a local merchant in 1959, originating as a way for shopkeepers to attract crowds to a college town that slept in the summer when the students were away. The first fair cost $132.47 for postage and a mailer—split evenly between the Ann Arbor Art Association and the South University Businessmen’s Association. For over 40 years, the merchants and The Street Art Fair co-existed until simmering financial disputes led the "original" fair to its current home in the North University/Burton Tower area. South University merchants now control their own Art Fair, and their web site  www.a2southu.com/art-fair touts “great ethnic restaurants, hip and quirky stores,” souvenirs, and the beer and wine garden, alongside featured artists.

Participation Costs
The tension between art and business is not lost on the artists. Tampa-based photographer Nels Johnson wrote in a blog, “Requiem for an Art Show,” after the 2011 Art Fair, “I have done this show for 23 years since 1988. Was in the State Street show six years and have been in the Guild's Show, always on Main Street, the rest of the years.” Johnson praised the Guild for running a “professional operation,” but then targeted “the merchants of Ann Arbor [who] control what goes on at all of the shows.  They are a greedy bunch who don't really care as much about the arts as they care about lining their pockets and getting rid of surplus goods.”

Johnson added that for many years, Ann Arbor was the “biggie” of the summer. “Some artists could live off their sales [from Ann Arbor] for six months.” But in 2006, just as the recession was hitting, merchants doubled the booth fees, up to $1500 for larger booths. He estimated “2000 booths at all of the shows, including the scab booths, chasing a paltry turnout of buyers with disposable income,” there were “Too many booths, too little buyers.  A very thin slice for most of us.  The model is broke, folks,” Johnson opined.
Coupled with travel and lodging expenses, he concluded, “The shows costs are not worth it.”

It’s About the Art
The Guild of Artists and Artisans, a non-profit association of independent artists, founded in 1970 in Ann Arbor, now runs five art fairs throughout the state, including their fair in Ann Arbor spanning portions of Main, Liberty, and State Street. Its origins are decidedly rogue, in protest to what they believed to be the overly commercial nature of the Street Art Fair. Their web site,   www.theguild.org, states “A group of young artists from Ann Arbor began working on a separate art fair which would give emerging artists, craftspeople and art students a chance to “take to the streets.” Calling it the Free Arts Festival, they set up this “free fair” on the University of Michigan’s “Diag” on Central Campus.” Their success led to formalizing their association, and the Guild continues to enjoy an excellent reputation for taking care of their artists.

The Shadow In Ypsi
Ironically, as the Guild became more established, history has repeated itself with the Shadow Art Fair (www.shadowartfair.com), an event springing up in Ypsilanti about seven or eight years ago. Cofounder and well-known local blogger Mark Maynard remembers working the Ann Arbor Art Fair, standing at hot pizza ovens, with “people demanding stuff.” He began dreaming of “a counter-program, a street thing, to draw people from Ann Arbor to Ypsi.” With his artist friends, and the cooperation of the new Corner Brewery, they set up a “cool alternative” which takes place on the Sunday after Ann Arbor Art Fair.
Maynard recalls the first Shadow Art Fair. “We were prepared for a few people to show up, but thousands did. We had expressive art, interviewing people about their lives, intermixed with ceramics and watercolors. We had spontaneous group art.” In one such performance piece, a troupe of actors, dressed as mice, fed a massive cat its own waste. Abrasive? Absolutely, but equally free-spirited.
Maynard is not anti-Ann Arbor Art Fair. With a day job is in business development for UM, he notes, “I’m realistic. The economy needs it. It’s good for Ann Arbor. But it’s really expensive and it’s not art that resonates with a lot of people I know.”
He asks, “Isn’t there room for both? Ypsi, the cool sister city to Ann Arbor?” 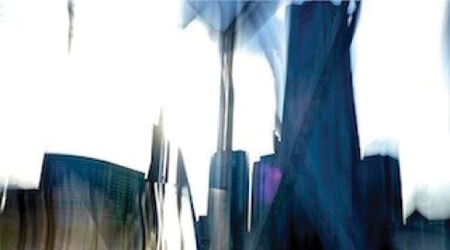 Takashi Yamashita blends photography and architecture in his art.

It’s About the Businesses
Just as many artists depend on Art Fair income, so do local businesses. Thom Byrd, the owner of Ed’s Bread, a supplier to many stores and restaurants, says “as a small business owner, when students are gone in the summer, it’s a boost in our business. We do about 40% more. I start an hour or two earlier [which, for Thom, means awakening at midnight instead of 1:30am] – and rely on “5 Hour Energy” to get through those 18 hour days.”

Not all business owners are thrilled with Art Fair. Brandon Johns, chef and co-owner of Grange Restaurant, writes, “[it] actually hurts our biz way more often than not. Art Fair week is one of the slowest weeks of the year for us. We have had maybe two days in three years that were positive. Of course, perhaps if they moved the food court from directly in front of my restaurant we would do better. But I've been told, every year, that is simply ‘impossible.’”

Other downtown businesses deal with Art Fair in different ways. Washington Street law firm Garris, Garris, Garris, & Garris is fortunate to have a moderate amount of parking. In the early days, Garris #2 (Mike) suggested to Garris #4 (Jackie) that she stand outside and charge for parking, to earn a few extra bucks. Now it’s become part of Jackie’s summer ritual. “I like to people watch.”

… And It’s About the Townies
Marcello Grasso, a cook at the Gandy Dancer recalls when he was tending bar at the Del Rio in ’95, and sported a homemade t-shirt that read, “This is not a petting zoo.” And on the back, “I will f***ing bite you!” He did it to shock the suburbanites. Today he has mellowed. “Hey, the whole town makes some money and people leave with things they like. Deal with it!” 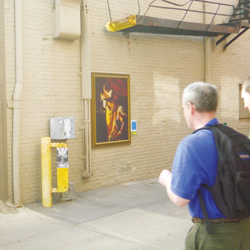 Artemesia Gentileschi's Judith and her Maidservant with the Head of HOlofernes, hidden at 223 S. Main St. (alley)

Attorney and artist Laurie Longo says she can “relax, leave the office earlier, come and go, and dress more like my younger self in fun, messy, comfortable quasi-hippie clothes entirely unsuitable for a law office and nobody even notices and its fun to run into everyone else from the "professional" world who are kind of ‘off duty’ and regressing the same way.”

While many townies certainly complain about the traffic and parking, senior UM learning specialist Deb Orlowski observes, “You’re not a true Townie if you haven't figured out how to get around town while everyone is here!” Professional educator Steven 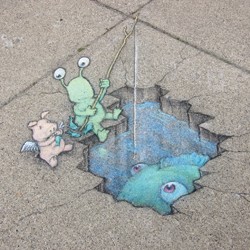 More About the Townies
Eisenberg has his secret free parking space, one block from the Art Fair.

Dan Meisler, a former journalist and now communications specialist for the UM Office of the Vice President of Research, doesn’t mince words when it comes to complainers. “I think it's a conscious attempt to display your townie credentials,” Meisler says. “People like to recount how many Art Fairs they've been to, how it used to be less commercial, how everyone who comes in is from the Detroit suburbs … these are nothing more than desperate attempts to prove how local you are. And it is a classic ‘first-world complaint’—that is, so many artists from around the world come set up shop in my back yard that I can't find a good parking spot.

“People should appreciate living in a city that hosts events like this,” Meisler continues. “I feel the same way about UM football—it's fine if it's not your thing (and I wouldn't begrudge anyone their prerogative to leave town for either event), but to complain about it as if it's a great affront to your precious lifestyle is blinkered, self-important and borderline childish.”

Perhaps all this tension is what makes Art Fair a success. This tug of war between townies and visitor, artists and merchants, established fairs and alternatives … it keeps us all from falling on our faces. At the same time we may grumble, “It’s not art, and it’s not fair,” we feel pride. It’s part of our city’s history and tradition. Says retired Street Art Fair director Shary Brown, “It’s the quintessential Ann Arbor event to be very proud of.”

But if you still can’t deal with Art Fair …. be comforted by the fact there must be … 50 ways to leave. (Read here)