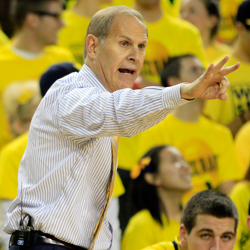 Little did Ken and I know we were going to see the beginning of the end, as we drove with high hopes to New Orleans.

The 1992-1993 Michigan basketball team was the sophomore year for the “Fab Five.” For the second consecutive year, these brash young men earned a trip to the NCAA Tournament Final Four, and Ken and I scored tickets to watch them in the Superdome. The year before, as freshman, the Wolverines had improbably reached the NCAA title game. They fell to Duke but “shocked the world,” as Juwan Howard liked to say.

A year later, expectations were much higher. As a #1 seed, Michigan was expected to win their bracket and advance to the Four, where they were to battle the legendary Kentucky squad, coached by Rick Pitino. The other bracket matched the equally storied North Carolina and Kansas teams, coached by Dean Smith and Roy Williams. Yet Michigan coach Steve Fisher boasted at that time an NCAA tournament won-loss record better than all of them, thanks to his 1989 NCAA championship and trip to the title game the year before.

It was one of the most anticipated Final Fours in history. Ken and I engaged in our share of trash talking. On the way down, we saw a series of hand-lettered signs that read “Cat ‘Paws’” with the Kentucky Wildcat paw print logo, signifying a rest stop for Kentucky fans. Ken and I hid our Michigan hats behind our backs, and walked up to the crowd who began to greet us with pro-Kentucky nonsense. Then we simultaneously placed our hats on our heads while singing “Hail to the Victors.” They chased us away good-naturedly.

Game day for the semi-final arrived. We made our way to our seats in the second deck, a good 9-iron shot away from what we believed to be the basketball court far below. Michigan won an overtime thriller against Kentucky, while the North Carolina Tarheels dispatched Kansas to set up the championship two days later. That final is remembered for Chris Webber’s infamous “time out” call when Michigan had none left but a chance to win on the last possession. But Webber played his heart out despite the last-second gaffe, and many blame Michigan players on the bench for mistakenly urging Webber to make that call. (Michael Talley is seen on video making the “T” sign and then clapping when Webber called the time-out right in front of the Michigan bench.)

After the game, Ken and I went to Bourbon Street and mingled with fans and players. I talked to a disconsolate Rob Pelinka, a substitute on that team who has arguably had one of the best post-college careers. (He is a top sports agent, representing Kobe Bryant among others.) Talley, on the other hand, was seemingly drunk and loud, either dulling the pain or not caring. Webber has said he went into hiding after that game, but his role in the Ed Martin money scandal which forever tarnished Michigan’s reputation makes the “time-out”  pale by comparison.

Michigan under-achieved after the 1992-1993 tournament despite great teams, and then wallowed in mediocrity after the scandals. Because of that, young fans may think our present fortunes are a new thing. The truth is that Michigan is one of the greatest college basketball programs of all time. ESPN recently ranked Michigan #13 in the country for the last fifty years, despite the scandals and dismal records in the ‘00s. This was based on a point system involving team records, conference titles, and tournament success. Had Michigan not been docked 16 points due to the sanctions and vacated wins, we would have edged Michigan State (#11).

Michigan had excellent teams in the ‘60’s—Crisler is still the “House that Cazzie (Russell) built”. The Wolverines reached the NCAA tournament finals in 1976 only to fall to Bob Knight’s undefeated Indiana Hoosiers ( a program ranked #7 overall), for Knight’s first national championship as a coach. Michigan coach John Beilein is returning Michigan to national prominence. This year’s team is a joy to watch. Ken and I still have season tickets together. After many year’s of suffering, perhaps Ken and I will have the opportunity for another tournament road trip.