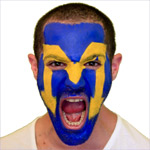 Back in the high life

If you have tickets to the “Cowboy Classic” on Saturday, September 1, call me. Michigan plays last year’s national champion, Alabama, coached by the devilish Nick “Satan,” former Michigan State mastermind. It just may be a classic that lives up to its name.  How did Michigan go in recent years from a national embarrassment, to the season opening marquee game, fresh off last year’s 11-2 record and Sugar Bowl victory?

Never mind that Harbaugh and Miles were a little crazy. Both were wildly successful, and in this business, that’s what counts. 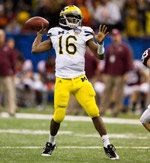 Brady Hoke shows that you can be level headed and still be successful, though the word on the street is that he can be intense when he needs to be. He has turned a couple of programs around, at Ball State and San Diego State, and after the humiliatingly pathetic Rich Rodriguez era, that’s just what the doctor ordered.

Will UM be as successful as they were last year? After marquee wins over Notre Dame, Nebraska, Ohio State, and an overtime win over Virginia Tech in the Sugar Bowl, “Hoke Springs Eternal” — as MGoBlog’s banner reads. But 2012 presents a tougher challenge, starting with the Alabama matchup followed by rematches with Notre Dame, Nebraska, and Ohio State that are all on the road. Perhaps the biggest test is Michigan’s most anticipated home game, the October 20 matchup with the Spartans, who have beaten the Wolverines four straight times, and continue to treat the annual Michigan game as their Super Bowl.

Michigan is led by Denard Robinson, RichRod’s greatest legacy and contribution to the program. Robinson is not only an electrifying and charismatic leader at quarterback, but just may be one of the best ever at representing the team off the field. He mingles with regular folks at basketball games and other campus and town events; he is unfailingly friendly and accessible.   Robinson continues to grow as he adjusts from Rodriguez’ spread offense to Hoke’s multiple pro-style formations.

“Shoelace” remains the only player in NCAA history to pass and run for more than 1500 yards each in the same season. If he can cut down on his interceptions, he can expect his senior year to be his best ever.

Robinson’s main target at wide receiver will be senior Roy Roundtree, who needs to have a breakout season to ensure that Michigan has a breakout offense. Backup QB Devin Gardner moves to wide receiver, assuming Robinson remains healthy. The tailback slot will be filled by last year’s 1000 yard rusher (and greatest name on the team) Fitzgerald Touissant, but Touissant’s recent drunk driving arrest leaves his status for the Cowboy Classic uncertain.  The offensive line will be anchored by massive left tackle Taylor Lewan, and, on the defensive side of the ball, Will Campbell and company need also to step up to make up for the loss of Mike Martin. The secondary should be solid, led by hard-nosed former walk-on Jordan Kovacs and last year’s surprise freshman star Blake Countess (second best name on the team). Linebackers remain this teams’ strength, featuring last year’s leading tackler Kenny “Delerious” Demens.

On the whole, Michigan will be competitive in every game, but given their difficult schedule, four or five losses is not out of the realm of possibility. The crystal ball will become clearer after the season opener vs. Alabama. … Wait! I see something in the crystal ball … you have a pair of 50 yard line tickets to the Alabama game … you want to give them to me, freely and happily … you do, right?  Like most predictions, that one is a crapshoot. Michigan’s 2012 season will be an exciting one, but too many games can go either way to reliably determine where they will end up. This season rests on the shoulders of Brady Hoke, and the feet and arm of Denard Robinson. The only thing I will say for sure, is that regardless of this season’s  final record, Michigan football is back. 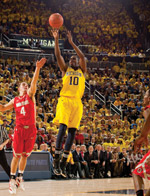 Crisler Center – no longer an arena – also heralds great expecations. A year after its impressive renovation, the UM Athletic Department has boldly jacked seat prices into the stratosphere. Hope is also high for the women’s program after the hiring of new coach Kim Barnes Arico. She spent the last ten seasons with St. John’s, leading the Red Storm to four NCAA Tournament appearances. A highlight of her last season was stunning Connecticut on their home floor, to end the Huskie’s 99 game home winning streak. The Wolverines return leading scorer and shotblocker Rachel Sheffer from last year’s 20-12 team. Ticket prices remain quite reasonable for women’s games, and they would love to have your support.

See www.mgoblue.com for tickets, schedules, and all the latest. 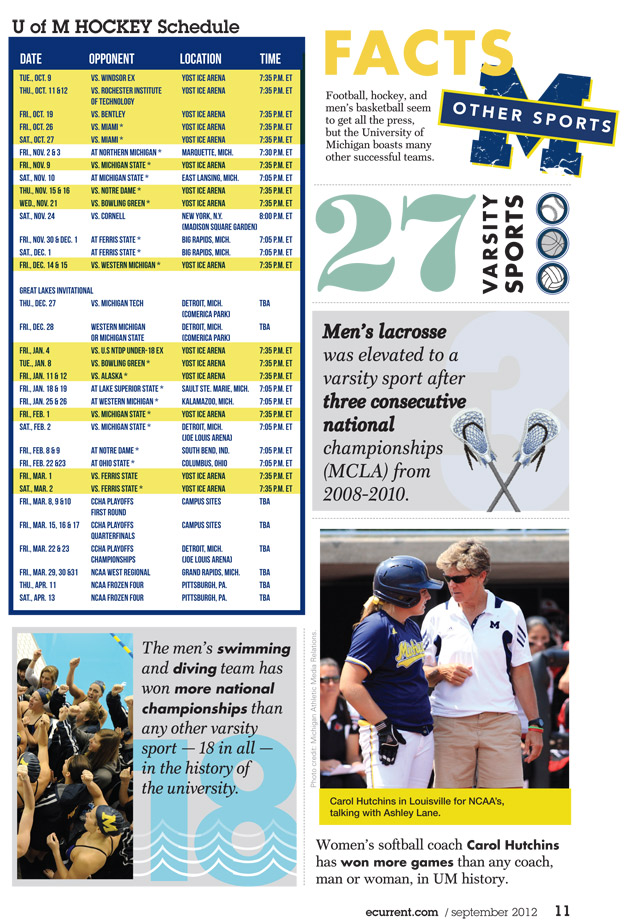 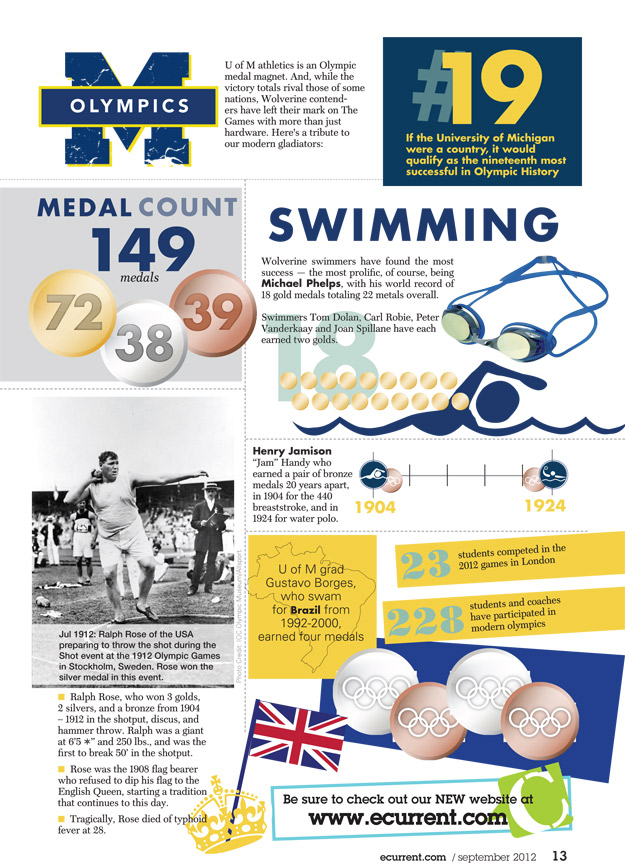