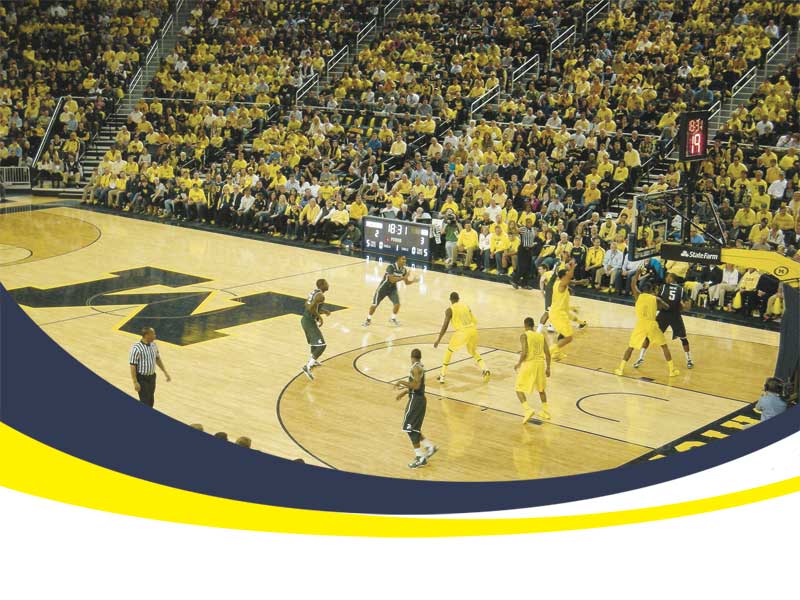 This article is written at a moment of crisis. Hundreds appeared on the U-M Diag, still in September, and marched to President Mark Schlissel’s house to call for the resignation of Athletic Director David Brandon. Thousands more signed petitions, wrote social media posts, and otherwise expressed their outrage at the arrogance, miscommunication, and incompetence that is the shame of this athletic administration. Whether Brandon survives the wreck is undetermined, but it’s going to be my bet that he somehow survives as you read this article 30 days hence.

One shining beacon in this darkness has been U-M basketball coach John Beilein. The man has done just two things since he’s been here: win, and lead with integrity. Can it really be his eighth season already? All he’s done is win two Big Ten titles and lead the team to the NCAA tournament in five of the last six years, including the championship game in 2013. Often he does this with a crew of players that overachieves the sum of its parts, defying pre-season predictions in the process.

It’s also hard to believe that not long before Beilein was hired by Dave Brandon’s predecessor, the basketball program was in perhaps even worse disarray than football is now. In 1999 four players were called before a federal grand jury and revealed troubling financial ties with booster Ed Martin. This eventually led to draconian NCAA punishments—vacating of team honors and individual awards, and the loss of scholarships.

The team didn’t do so well either, with an assortment of borderline players that often found themselves in legal trouble. Former Duke basketball star Tommy Amaker came in to clean up the program, still suffering from the weight of the sanctions, and performed admirably, without a whiff of scandal. While Amaker won more than he lost, he never achieved the same level of success as Beilein. His termination was controversial, with defenders pointing out that he won in spite of the shadow of the NCAA sanctions that still loomed over the program.

But it’s undeniable that John Beilein has succeeded by any measure. He consistently beats ranked opponents, including long time nemesis Michigan State – beating them six of the last nine contests – MSU had won the previous 18 of 21. He also does well in the postseason, with a gaudy 16-9 record in the NCAA tournament. And he not only recruits top prospects, but develops them – with stars such as Trey Burke, Tim Hardaway, Nik Stauskas, Glenn Robinson Jr., and Mitch McGary in the NBA. Remarkably, these were all five of his starters from the 2013 NCAA championship game.

The downside of such excellent player development is that Beilein has to scramble to replace those who leave early for the pros. The 2014-2015 season will be no exception, but already there is great buzz about promising recruits. Especially keep an eye on freshmen Muhammad Ali Abdur-Rahkman, Kameron Chatman, Ricky Doyle, and Aubrey Dawkins, not to mention inspirational story Austin Hatch – who perseveres despite two separate airplane accidents that tragically saw five family members perish. These young men will join returning regulars Caris LeVert, Derrick Walton, Zak Irvin, Spike Albrecht, and a potentially surprising Mark Donnal (a redshirt freshman last year).

They will be in good hands with John Beilein, a man who leads. He has been recognized as “Coach of the Year” five times, with five different schools, at various competitive levels. He has unscrupulous integrity, even refraining from talking to his own son at a basketball camp because it might run afoul of the NCAA’s Byzantine regulations. He is unfailingly gracious and patient, as loyal to his own players as he would be to his own son, always deferring praise to the young men he serves.

Perhaps most importantly in this dark time of Michigan sports, Coach Beilein has always been an honest and straight shooter with the media, his team, and his administration. After an unforgettable and horrific football season, Michigan supporters sorely need relief as well. Fortunately we can count on Coach John Beilein to give them something to get excited about.