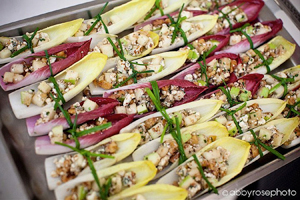 It’s called “eat.” Don’t concern yourself with “eat – what?”  Look at the sign. It’s simply the word “eat,” with the “E” pierced by a fork. Co-owners Helen Harding and Blake Reetz were shown other logos. Sheep frolicking in the fields; the sun beaming down on wholesome children picking ripe fruit; farmers chewing wheat. No. When they saw the word eat, pierced by a fork, they said “Stop.
That’s us.”
Yes, they will acquiesce to being called “Eat Catering and Carry-out,” because that’s what they do. And they do it frighteningly well, out of a cheery space on Packard Road (recently vacated by Marcano’s Argentinean Takeout, and before that, BTB Pizza Hut’s Ersatz Pizza and Things). Unlike most food establishments, the entire kitchen is completely visible to the public, separated only by a low counter. Thus no shortcuts for Chef Blake, whose careful preparation of fresh foods is a great spectator sport for those waiting on an order.
While eat does a brisk takeout business, there is a table for four (“Table 1”) and three counter stools. But Blake and Helen’s real meat and potatoes is their catering side. Their successful summer at Mark’s Carts, in downtown Ann Arbor, boosted their visibility to the public. That’s the source of their takeout regulars, as well as their catering business. “We have events scheduled into October
of 2012.” 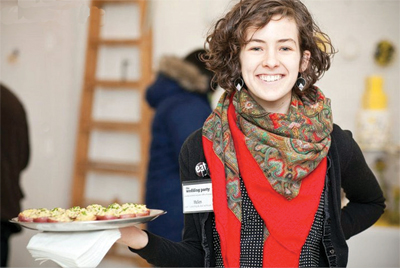 No, they are not a couple. They each enjoy committed relationships, and their partners are very supportive, each pitching in to help with the business when they can. That doesn’t mean that Helen and Blake don’t have “blowout fights.” Helen recalls one, “It was like we were married. ‘You take me for granted,’ ‘You don’t appreciate me,’ that sort of thing.”
They met at the former Jefferson Market. Blake started at age 18 as prep cook, and worked his way up to chef; Helen was a 15-year old-dishwasher who became the face of the “front of the house.” They worked together off and on 7 years. Although Blake has taken culinary arts classes, he is basically self-taught, first learning “cooking with Mom” at the family farm in West Branch. He and Helen talked about opening their own catering business as Jefferson Market closed in 2006. Although Blake moved to North Carolina and Helen went to school at the University of Michigan, they eventually found their way back together. “This local food thing is taking off,” said Blake. “We’ve got to jump on it.”
They began catering, starting out of their houses with small jobs for family friends, then in March, 2009 renting the kitchen of Stacy Williams, owner of Ann Arbor’s “What’s Cooking.” They began getting more catering work, then did a few breakfasts at SELMA Café (which led to catering their first big wedding, including a tea service, cocktail hour appetizers, buffet dinner and late night snacks). Then in the summer of 2011, they got a “great public face” with Mark’s Carts. Publicity grew, they hired employees, and were able to open their own space in the fall of 2011.

The food all works, thanks to Blake’s self-described “logical” approach to each recipe. I loved the vegan carrot-ginger soup, but when I tried the split pea soup I almost fell out of my chair. I also sampled a remarkable creamed Swiss chard, the Coq Au Vin, and the green b.l.t. (made with green tomatoes and “green” i.e. fresh bacon). The Korean bbq, made with grass-fed beef, is slow-braised brisket with sesame and soy, with daikon kimchi on an onion bun. The Sloppy Yusuf includes ground lamb with homemade cucumber-yogurt raita. Yum, yum all.
Their food is seasonal and local. Produce comes form Seeley and Goetz Farms. Meats are from Natural Local Express, all natural and grass-fed. Bread is from Avalon Bakery. When selling their catering, Helen notes, “Some people like the local. Others just love our food.”
So yes, eat does excellent catering. And carryout, not to mention a little in-house restaurant service. But no official subtitle, or labeling of their food, is necessary. Suffice it to say that Helen Harding and Blake Reetz succeed in all they aim to deliver. Put that on your fork and eat it.