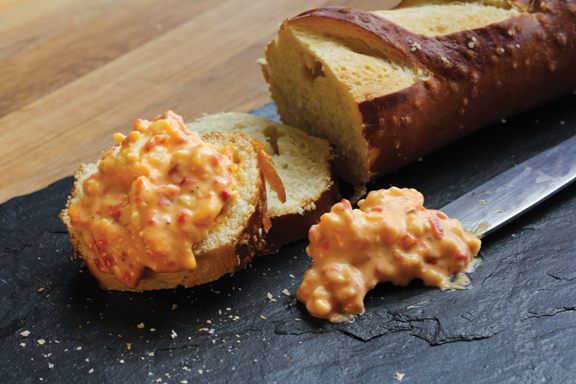 Biscuits smothered in gravy, grits covered in melted cheese, deep fried everything: Southern cooking is iconic American cuisine. It is about comfort, tradition, and sneaking bacon fat into otherwise nutritious dishes. It’s hard to think about Southern food and not to at least consider knocking a giant hole in your kitchen counter and installing your own deep fryer. But luckily for the sake of your taste buds (and security deposit), it’s not hard to find authentic Southern food in Ann Arbor, if you know where to look.

Pimento cheese is one of those Southern foods that, unlike barbecue or fried chicken, people may not have tried. Zingerman’s co founder Ari Weinzweig writes on the Roadhouse website, “I assumed that pimento cheese was like the pimento loaf stuff that they sell in the deli cases of mass-market grocery stores. You know pasteurized, processed cheese that no one that’s into full flavored food would want to eat.” That was before he tried it and started making his own. Now Zingerman’s Roadhouse’s pimento cheese is like the Steve Urkel of their menu; it just keeps showing up unexpectedly. But unlike the suspender-clad neighbor, Zingerman’s pimento cheese is always welcome. At Zingerman’s the creamy cheddar cheese and chopped pimento mixture can be found as an appetizer all by itself, in an omelet, spread on a burger, or even baked into macaroni and cheese. 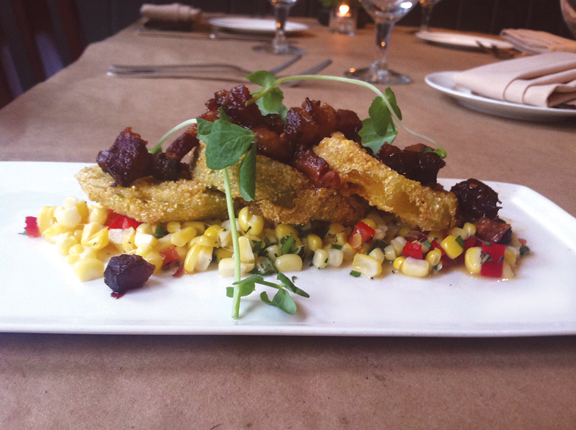 Fried green tomatoes are one of the most iconic foods of the South. Or are they? “We started frying the tomatoes in the Northern style, but later we switched to a Southern style,” says sous chef Chris Chiapelli of Grange Kitchen and Bar. At first Grange’s tomatoes were battered with panko and brioche crumbs, but now they are marinated in buttermilk, breaded with a seasoned cornmeal coating, and deep fried. The buttermilk and cornmeal technique is a popular way to fry other foods, like okra or chicken, in the South. But no matter the origin, the dish has earned its place in Southern cuisine and Grange’s crispy fried tomatoes certainly feel Southern. The dish’s accoutrements also help give it a classic Southern taste. The tomatoes are topped with a pickled corn relish and served with homemade buttermilk ranch sauce, and bacon jam
for dipping. 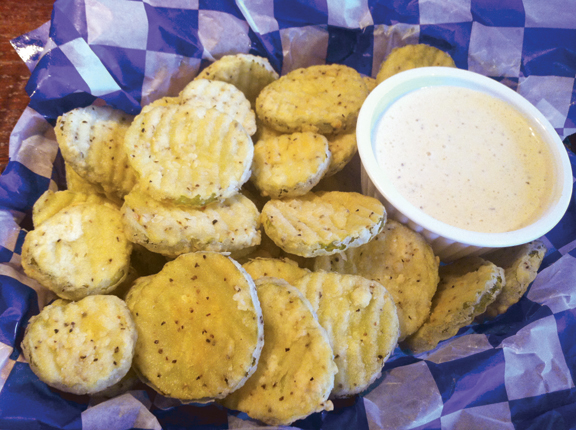 “I like Southern cooking because of the time and finesse it takes,” says Chef Neal Diebold, Head Chef at Blue Tractor BBQ and Brewery. Although best known for their various styles of barbecue from several different regions—Eastern and Western Carolinian, Texan, and even Asian—one of Blue Tractor’s most popular dishes comes straight from the South: fried pickles. The pickles are crinkle cut and soaked overnight in buttermilk, covered with seasoned flour and cornstarch breading, deep fried, and served with white barbecue sauce. When asked if people ever think this salty, crunchy, thoroughly Southern snack is strange, Diebold laughs and replies, “Not at all.” 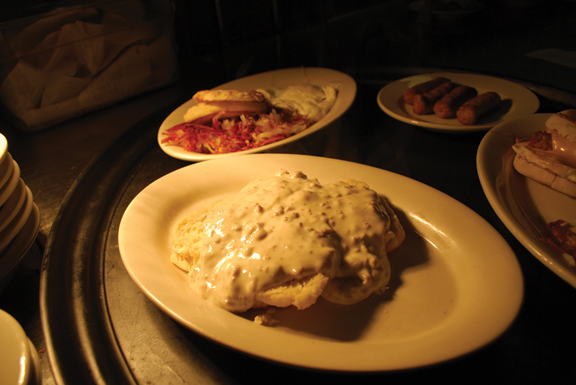 Although it is pretty much the lone Southern offering on the Northside Grill’s menu, dining room manager David Ruby says their biscuits and gravy is a favorite menu item at the restaurant. “Every year we review the menu and take off things that aren’t working. Biscuits and gravy has stayed on there for twenty years.” They are made from scratch Southern-style buttermilk biscuits and then doused with a peppery and thick white sausage gravy. Ruby isn’t quite sure how this Southern dish snuck onto the menu, but he’s not surprised at its popularity. “It’s a comfort food,” says Ruby. “Sometimes when it’s cold, you need something that will stick to you.” 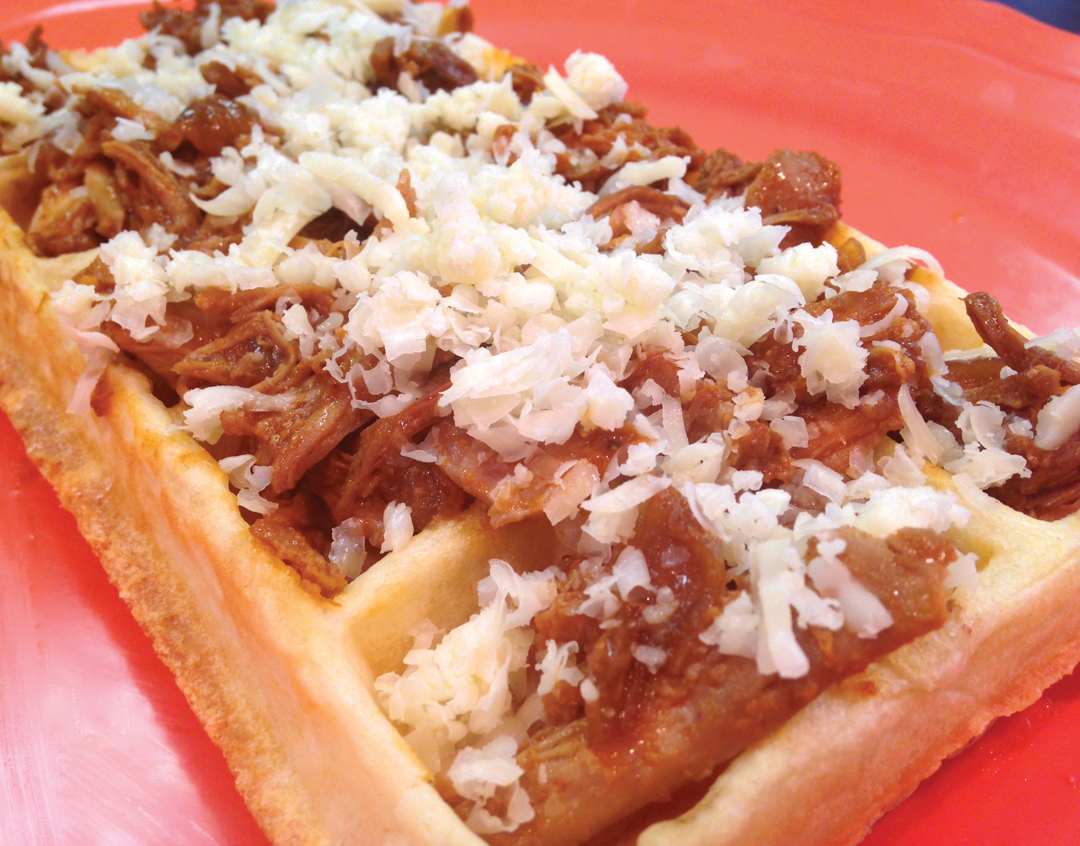 A European-style waffle shop is probably not the first place one might search for Southern food, but propped up on The Wafel Shoppe’s counter is a poster offering a special menu item: chicken and waffles. At first, The Wafel Shoppe was hesitant about putting chicken and waffles on the menu, but so many people asked for it that they had to figure something out. In the South, chicken and waffles is a sit-down dish with fluffy waffles and pieces of fried chicken, all covered in maple syrup. But the Wafel Shoppe serves European-style waffles that are meant to be hand-held, not eaten with a knife and fork. Their version is a portable take on the classic dish. They use Carolina-style barbecued chicken instead of fried, sans syrup, but the vinegar-based sauce contains sugar cane, which mimics the sweetness of the absent syrup.