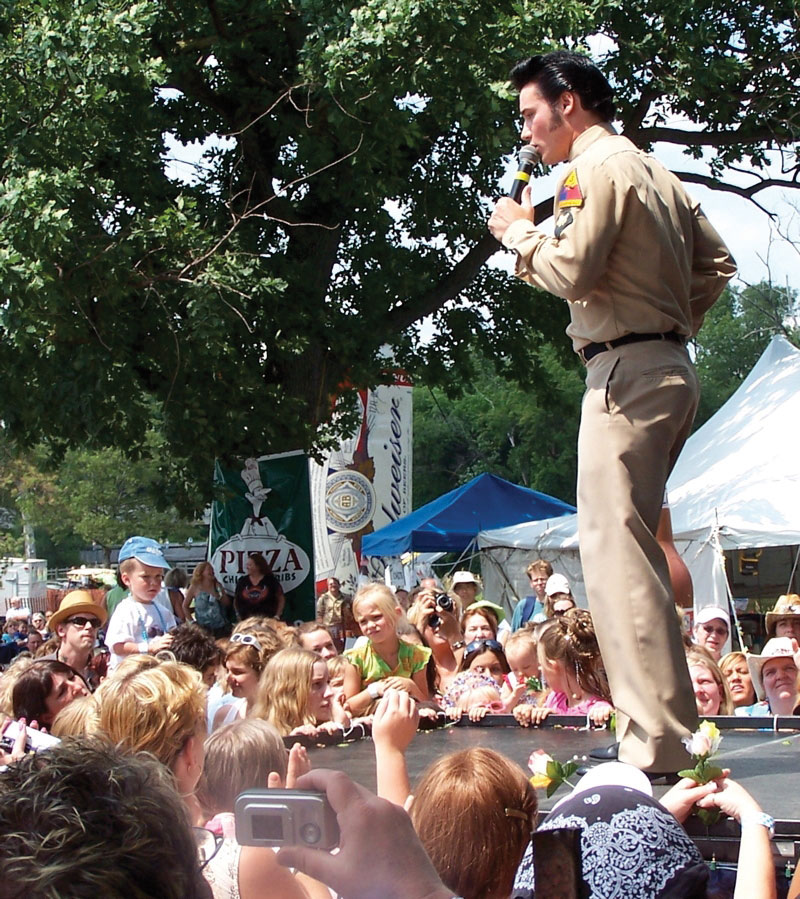 The King may have left the building nearly forty years ago, but his spirit lives on in Ypsi’s Depot Town’s annual ElvisFest. The outdoor event, the 16th of its kind, runs July 10-11 and features some of the nation’s top Elvis Presley tribute artists performing music spanning Elvis’ legendary career. Between sets artists will perform tributes to other multi-generational icons including Reba McIntire, James Brown and the Blues Brothers.

The festival’s headliner, Elvis tribute artist Matt Cage, says ElvisFest is unlike any other Elvis-themed event in the business.

“It has a really fresh, unique feel that nobody else has,” he says. “Most of them do contests so you get more performers, but they only do one or two songs each and they get judged. They tend to be a lot more tense. The artists can’t get into it in the same way that you can at a concert. So Michigan Elvisfest, they take 8 or 9 top-notch performers and everybody gets a half an hour slot to really settle in.”

Michigan Elvis Fan Club president Lorraine Minicilli says ElvisFest also boasts a younger crowd than many other tribute festivals. She thinks young people are usually first exposed to Elvis’ music through their parents, but his timeless sound and personality keeps them coming back. There’s tradition in listening to and celebrating The King.

“I’ve never seen so many young people coming out,” she says. “The baby boomers are there, and their kids and their grandkids just rush the stage. They like the beat of the music, and learning who Elvis was and what he did for people and charities. These children are taught that by their parents and grandparents, and they’re continuing that with their generation.”

That theory lines up with Cage’s story. He grew up listening to his parents’ record collection and developed a fascination with Elvis that would unexpectedly lead to a career. “Years ago I was doing karaoke at a bar, and some people said, ‘Hey, you’re really good at this,’” Cage laughs. “So five years ago I entered a contest. My phone started ringing after that, and I’ve been doing it ever since.”

Cage says what made Elvis so famous was that he was the classic triple threat; his voice, his good looks, and his showmanship were unparalleled. Cage believes every Elvis tribute artist needs to possess those three qualities, but to be a truly great tribute artist one must inject his own personality into the performance.

“Nobody can be the same as Elvis, and the great thing about being a tribute artist is you can put your own spin on it,” he says. “Elvis always liked to cut up on stage, so I always inject a lot of humor into my shows. Sometimes I’ll say things Elvis would say, but a lot of it is me. I try to put my own Elvis-esque humor into my shows, and that’s what people really seem to enjoy of my work.”

ElvisFest entertainment chairperson Wanda Smith promises that whether you’re an Elvis fan or not, you won’t walk away disappointed. As she puts it, “Everyone knows at least one Elvis song,” and even in the rare event that’s not the case, the festival’s world class entertainers will offer an uncanny primer to The King’s storied career.

“Elvis’s music is like soul food,” she says. “If you ever got down to Graceland when they have the candlelight vigil, it doesn’t matter if you’re black or white or whatever, Elvis’s music touches everybody. This festival is a rare opportunity for people to express their love for Elvis’ music. If they don’t get a chance to go down to Memphis, we’re the closest thing.”