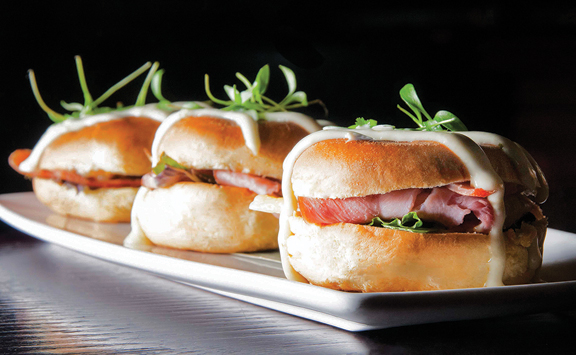 On any given weekend night, it’s not uncommon to find a line of people wrapped around the corner of Main and Liberty Streets downtown, waiting to get into what is quickly becoming one of the city’s hottest nightlife venues.

Salsa dancing lovers flock to Habana on Thursday nights, which feature Latin music and free Salsa lessons, while DJs spin a more typical mix of pop, dance and Latin music on Fridays and Saturdays. While Habana is becoming well known for its nightlife scene, that’s not all it has to offer.

It originally started out in the space now occupied by Blue Tractor BBQ on Washington Street. When the owners (the same great people at Mission Management behind places like Mash, Jolly Pumpkin and Grizzly Peak) opened Lena, they moved Habana into that new restaurant’s basement.

John Sleamon, General Manager at Habana, explained that the new location came with a new focus. “We really wanted to focus on providing a cool lounge atmosphere with good craft cocktails and Latin food,” he said.

Climbing down the stairs into Habana, one is transported into a world vastly different from the modern, airy space of Lena upstairs. The exposed concrete walls and dark wood contrast with the cozy leather booths, dimly lit overhead chandeliers and stained glass wall behind the bar.

We sat down at a booth along one of the walls and ordered the chef’s guacamole as an appetizer. The guacamole, served alongside a heaping pile of tortilla chips, was quite good—very fresh, with nice big chunks of avocado, onion and tomato—but the real standout was the delicious chili-dusted tortilla chips. I could have eaten more of them, but I had to stop myself to make sure I still had room for my entrée.

For the main course, we opted to share the Cuban sliders and pulled beef brisket tacos. The sliders are Habana’s take on the classic Cuban sandwich: both smoked ham and pork belly on a dinner roll-sized bun, topped with Manchego cheese, pickles and mustard aioli. These were a hit for me, especially since I’m a huge fan of anything containing pork belly.

The tacos were piled with pulled beef brisket, black beans, chimichurri sauce and queso salsa. The meat was tender and flavorful, and the toppings complimented it beautifully. Both the tacos and the sliders come with three items per order, more than enough to satisfy your hunger.

Habana’s bartenders pride themselves on craft cocktails—some of the most popular include mojitos, margaritas and sangria—and “everything is made to order with fresh ingredients,” Sleamon says. In addition to the regular cocktail choices, Habana bartenders also like to feature different seasonal concoctions—such as apple cider sangria and a vanilla mojito for the winter months.

Whether you’re looking for a light meal, a pre-dinner drink or late night dancing, Habana is the perfect place for a night out on the town