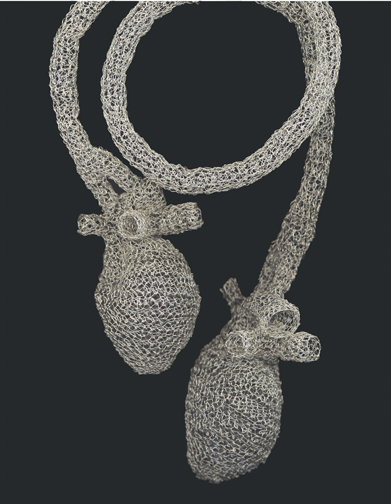 While pursuing a Master’s of Fine Arts in jewelry and metals at Kent State University in Ohio, Anne Mondro would drive to her family’s home in Taylor, just outside of Detroit, to be with her grandfather, who at the time was dying of cancer. The driving gave her time to reflect—on herself, illness, and perhaps most importantly, the guilt she felt about making art while her relatives became caregivers.

The experience had a lasting impact. Mondro, now an Associate Professor in the University of Michigan Stamps School of Art & Design, shifted her field of study. She began to examine how illness and coping strategies affect not just the patient, but entire communities, laying the foundation for a field of work at the intersection of art and health, both physical and spiritual. “My work was about different personal experiences of Inside the twin hearts of Mondro’s ‘Caregiver’ sculpture.

family members with illness and how that family, both the positive aspects as well as the negative,” Mondro, 36, says.

She works mainly in sculpture and digital imaging, focusing on issues of health and wellness, commenting on physical phenomena of the body in times of illness. Often, she uses anatomical images allowing viewers to see human aspect beneath the surface of gender.

At times, she might design a fullbody sculpture crocheted from steel wire, no faces, limbs, or identifying body parts. But, at other times, her work appears on a smaller scale. 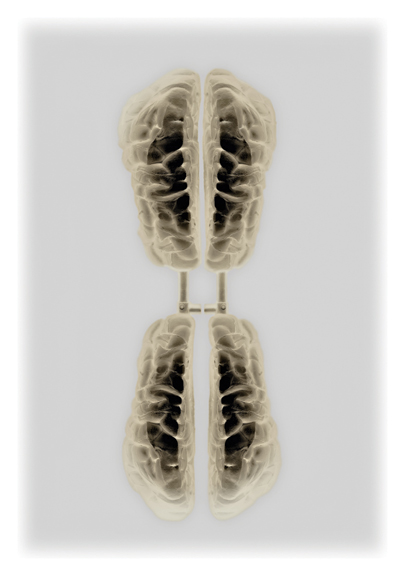 “Conjoin,” at (right) a 2013 piece, is a digital image featuring two plastic brain models connected together, indicative of the close bond that develops when you care for someone with an illness.

“You kind of co-exist together much more when there’s illness involved,” she says.

With a grant, she has currently embarked on a yearlong research study in collaboration with researchers from the University of Michigan Schools of Public Health and Social Work. Thirty caregivers for patients with memory loss will be trained in “art interven- tion,” learning to impliment creative projects alongside their more typical routines as caregivers —a process Mondro said strengthens the healthcare bond, which can often be trying.

“It’s enormous stress,” she said. “We can’t eliminate that stress but we can maybe give them some tools and ways to aid the caregiving.”

As a young girl, Mondro suffered from a speech impediment, prompting her to spend hours alone, drawing and coloring. “No one could understand me, so I figured I might as well just be in my own world,” she laughed. “I was always drawing or doing something because I loved that I could escape,” she said, nervously playing with her earring. “I was using creativity as a way to escape in a positive way.”

Mondro aims to create a visual representation of Dickinson’s poetry, a process that will include interpreting how abstract concepts like grief and heaven are portrayed in her poems.

Though it could seem like a departure from her typical repertoire, for Mondro, it’s all connected.

“This Emily Dickinson work … it’s about the vulnerabilities and strengths we have,” she said. “These are issues that surround illness as well as caregiving.”