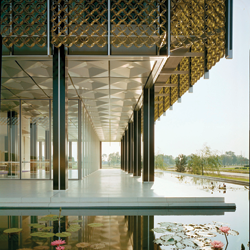 On now through Sunday, October 13 (don’t wait till then), is a fabulous exhibition at the Cranbrook Art Museum, “Michigan Modern: Design That Shaped America,” which shows how, right here in Michigan, art and design were revolutionized into what philistines like me call simply “modern.” We Michiganders should never forget that we were an epicenter of American life and world-changing design. Not just vintage automobiles (they’re in the show, too). Not just furniture, the interior decorative designs that we grew up with and used every day, and that are still with us. Not just buildings, but timeless life spaces that will live on as long as civilization perseveres.

A sample of the work on display:  Minoru Yamasaki lived and worked in Bloomfield Hills—his World Trade Center in New York was flattened by terrorists, but his Bloomfield Hills Temple Beth El and Birmingham Unitarian Church are still standing, and so is much of the Wayne State University campus that he designed. Albert Kahn, the foremost American industrial architect of his day, designed Cranbrook House, the residence of the visionaries George and Ellen Booth who started the whole Cranbrook thing. Kahn did the Fisher Building, the General Motors Building and half the University of Michigan central campus. Eliel Saarinen designed the Cranbrook campus, a National Historic Landmark. His son, Eero, grew up there and became one of America’s leading architects. His work included the General Motors Technical Center campus, the TWA Flight Center at JFK Airport and the Gateway Arch in St. Louis.

Detroit’s Lafayette Park is the world’s largest collection of Mies van der Rohe’s residential architecture, and includes one room that has assembled a Lafayette Park apartment, including Herman Miller interior decoration and trompe-l’oeil walls so you get the re-created outside view from the inside. There are too many other Michigan artists and designers featured in this exhibit to mention them all.

Furnished in Michigan
Also at the CAM are the iconic furniture and other decorative designs of the Cranbrook-based artists, including Charles and Ray Eames, Florence Knoll, Harry Bertoia, George Nelson and so many more who were recruited to Herman Miller, Inc. in Zeeland, near Grand Rapids. Shortly after WWII, Herman Miller took these designs and manufactured the pieces that have defined “modern” ever since. There is a fascinating series of photographs capturing the artists at work. I’d never seen pictures of half of them, even though I’ve loved their chairs, lounges, clocks, sculptures, homes, fountains and public buildings for as long as I can remember.

Especially exciting was the presentation of the work of Alden B. Dow, the son of the founder of Dow Chemical in Midland, Michigan, who earned degrees in engineering at the University of Michigan and architecture at Columbia, and studied under Frank Lloyd Wright at Taliesin. At the 1937 Paris International Exposition, he received the Diplome de Grand Prix, awarded to the finest residential architect in the world—in that contest, he entered his own house and studio in Midland, which is now a National Historical Landmark. On UM’s Central Campus today you can see his Fleming Administration Building. Across the street from the Law School, it opened in 1968, and is known by everyone as the President’s House.

The show also includes a fascinating collection of paintings from 1936-1974, featuring the remarkable work of Cranbrook artists Wallace Mitchell and Zoltan Sepeshy. While the weather is nice, take a tour of the vast Cranbrook Gardens. You can pick up a map of suggested sights at the front desk of the CMA. Bring your family to see what a design-crazy state they’ve been living in.