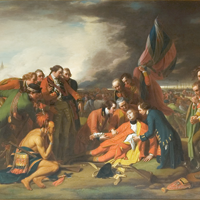 The Battle of Quebec on September 13, 1759 was a decisive engagement in the Seven Years War. It was a world war among the eight major powers in Europe, fought for control of colonial and trade empires in Africa, India, Asia and the New World. After seven years a million and a half people had died. That was a lot back then. In North America it was known as the French and Indian War, fought between England and its colonists (us) against France and its colonists, with various “Indian” tribes fighting on either side. The battle won the war and the war gave England unchallenged control of the entire North American coast. Major General James Wolfe, who led the British forces, was himself killed on the battlefield, making him instantly a larger than life war hero for all English speaking people.

But they didn’t have television or even photography so the best way to depict the epic event was through “history painting.” Up stepped Benjamin West, an American colonist painter who came to define the British Empire, not only in North America but around the world.  The University of Michigan’s Clements Library of rare books has a world famous canvas of The Death of General Wolfe, which it has loaned to the University of Michigan Museum of Art for a monumental exhibition: Benjamin West: General Wolfe and the art of Empire, Discovering Eighteenth-Century British America. The painting is staggering and represents a turning point in large-scale history painting, portraying a contemporaneous event with contemporaneous clothing and surroundings. Academics like Sir Joshua Reynolds thought the characters should sport classical garb like togas and sandals.

The first version of “The Death of General Wolfe” (1770) was a sensation. West went on to paint five others including the Clements rendition in 1776, a year that no one then could have known was America’s birthday. Each portrays the dying Wolfe as a Christ-like figure in a traditional Christian “Lamentation” scene surrounded by followers, acolytes and loved ones. In the foreground is a Native American as noble savage, posed like Rodin’s “The Thinker.” The exhibition also features more than 40 other related works from Michigan, Canada and British collections. In addition, there is a concurrent exhibition, Discovering Eighteenth-Century British America: The William L Clements Library Collection. It is a mind-blowing array of primary sources on North America from 1492 to 1800 — maps, prints, documents and books, all of them far out. By the way, if you haven’t visited the amazing Clements lately make a point if it.  It’s just around the corner from the UMMA on South University.  Did I say they are both free?

Both shows run through January 13, 2013. There is a sumptuous, fully illustrated catalogue, published by the Museum as part of its new, ambitious and exciting UMMA Books series. A perfect Christmas gift for the artist and art lover.  Looking back, the death of General Wolfe immediately presaged a number of world-shaking events. Pontiac’s Rebellion in 1763 set the Native American tribes on a downward spiral from which they have yet to recover. The French Canadians, known as Acadians, were deported and expelled. Many found their way to Louisiana, where they became known as “Cajuns.” The American Revolution followed, of course. And in 1803, fearing English annexation of vast tracts, Napoleon conferred the Louisiana Purchase, doubling the size of the United States. The rest is history.

Farther Afield
Opening on October 14, the Detroit Institute of Arts presents Fabergé:  The Rise and Fall.
The Collection of the Virginia Museum of Fine Arts. If you’ve never seen Fabergé one-of-a-kind bejeweled eggs up close and in person, don’t miss this chance.  As many people know, Karl Fabergé was the imperial jeweler to the doomed Russian royal family. As many other people know, his name was expropriated for cheap aftershave and dime-store deodorants. He is arguably the greatest artist jeweler of all time. There are several months of lectures, films and musical programs related to the show – even a Russian Imperial Tea Reception. It’s only 45 minutes from downtownAnn Arbor.

Chasing Your Dreams with Style: The Michigan Fashion Media Summit