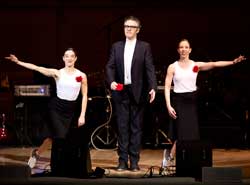 On Saturday July 6, the Power Center will host a wild experiment in performance art:  “One Radio Host, Two Dancers: Ira Glass, Monica Bill Barnes, Anna Bass.” You may know Glass as the creator and host of “This American Life,” a public radio show distributed by Public Radio International that plays on over 500 stations. Ann Arbor gets it on both WUOM and WDET. The show serves up vignettes of American lives by turns interesting, funny, shocking, and sad. It’s a bit talky for me, but my wife loves it, and gets mad when I make fun of Glass’ unmistakable voice—nasal, staccato, rapid-fire—but I look forward to this Midwest premiere because, in Glass’ own words, it combines two art forms that have no business being together: dance and radio. Is it story-telling with backup dancers, or hoofers pantomiming a plot? You be the judge. That’s entertainment!

Changing hands
In more sobering news, after sixteen years as Director of the Kelsey Museum of Archaeology, the renowned Sharon Herbert is stepping down. She had been a curator for ten years before that, and had long since realized that she can never learn enough about or from the Kelsey. The museum's collection boasts tens of thousands of artifacts, plus ongoing projects around the world, now including excavations in Sudan and Italy.  (Italy sounds better to me, but then again I’m not an archaeologist.) The current special exhibition “Kelsey Contemporaries” brings practicing artists’ interpretations of the interactions between the museum displays and observers who are amazed by them, like me. There is also a comparison between the Karanis site (an Egyptian town in Roman times) as Professor Kelsey found it from 1924 to 1935 and as it appears today to a team of UCLA excavators.
As Director Herbert steps aside, she reminds us of the vital importance of museums like the Kelsey which discover, preserve, study, analyze, and present the remains of past societies to modern society. The first thing that springs into relief is that dead cultures were themselves once modern. Then comes the realization that some day we will be a past society that, with any luck, will be preserved in a museum as lovely as the Kelsey. Herbert quotes Faulkner: “The past is never dead. It’s not even past.”

The Dean has announced the appointment of the next Director, Christopher Ratté, Professor of Classical Archaeology in the Departments of Classical Studies and History of Art. Professor Ratté has been a Research Associate with the Kelsey since his arrival at Michigan from New York University in 2006 and has served as Director of the Inter-departmental Program in Classical Art and Archaeology since 2009. Ratté has directed excavations and surveys of Kelsey-sponsored fieldwork at Aphrodisias in Turkey and Vani in the Republic of Georgia.  In short, the Kelsey will still be in good hands.

The final show under Sharon Herbert’s auspices is a shocker entitled “Red Rock & Rust Belt.” It is a display of archaeology photographer, Susan Webb’s juxtaposition of the ruins of the ancient Roman city of Petra (carved out of mountain of red rock) with the “ruins” of contemporary Detroit (hemorrhaging rust red on a daily basis). Petra has been a UNESCO World Heritage Site for thirty years. Detroit has been slipping off the map of the world for even longer.  On a brighter note, check out the “Drop-in Tours” on July 7 and 21 from 2-3pm.  It really does make it more interesting to know the little details of what you’re being amazed by.