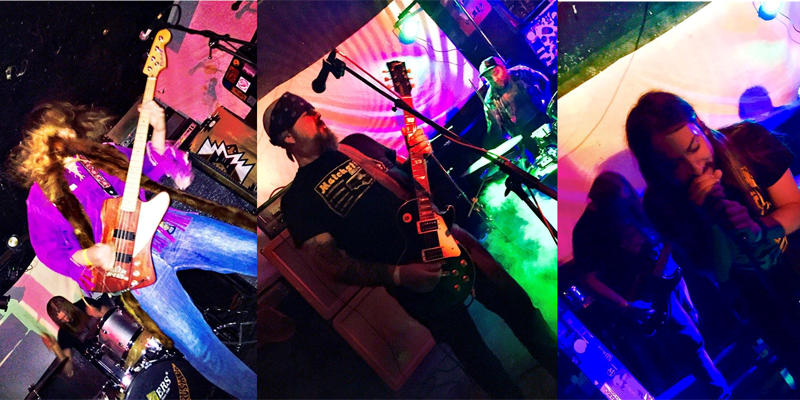 Fuzz Fest III comes to the Blind Pig the weekend of June 9 and it will summon all the mighty modes and mutations of rock ‘n’ roll music shared across the spectrum– punks, headbangers, psychedelic-shredder’s, guitar-heads and pedal-wizards.

Fuzz Fest was started by local musician Chris Taylor (of Blue Snaggletooth) in 2014 and it features three nights of live music from 30-plus bands. Local sparkplugs and rock mavens like JUNGLEFOWL, Disinformants, Human Skull, Zen Banditos and Sex Police are spread across the weekend’s lineups, along with notable friends visiting from Detroit like Nina & The Buffalo Riders, Carjack, White Shag, Blue Black Hours, Prude Boys, Voyag3r and The Muggs – and more than a dozen other righteous rock acts to catch at Fuzz Fest III.

Taylor talked about the significance of Fuzz Fest, and the core motivations for curating an ongoing concert series.

“I like the idea of presenting the different elements of rock music by building a lineup that gives the audience something they wouldn’t get from a typical show,” said Taylor.

Indeed. The diversity that can germinate (and thus distinguish) between bands that might be labeled arbitrarily under the genre heading of “rock” can be easily overlooked. Fuzz Fest starts a conversation about what “rock” means in a post-Internet world. As rapper Ice Cube said recently, when N.W.A. was inducted into the Rock ‘n’ Roll Hall of Fame, the genre is not a style, it’s an attitude; an approach to life.

Nothing if not enthusiasm

“The things about the last two Fuzz Fests that I really enjoyed were the energy and enthusiasm,” said Taylor. “From the audience and the bands, and the interaction between all the participating groups. I actually wasn’t sure I wanted to do the event this year, but people kept asking me about it and the enthusiasm was there so I felt compelled to do it.”

Taylor has been involved in Ann Arbor’s music scene for several years. Performing and recording music since he was a teenager he’s worked with luminaries such as Scott Morgan, Mitch Ryder and Ron & Scott Asheton. Lately, and for the foreseeable future after Fuzz Fest, Taylor plans on taking more time away from music to focus on fatherhood. Nevertheless, Blue Snaggletooth will still put out a 12-inch vinyl release later in 2016 on Ripple Music.

Fuzz Fest truly became a Michigan music festival last year, when nearly half the lineup featured artists from outside Washtenaw County. “I try to bring in groups from all over (the state),” said Taylor. “Fuzz Fest has hosted bands from Grand Rapids, Kalamazoo, Lansing and Midland, as well as Detroit. I’m always going to have a soft spot for Ypsi/Arbor, ‘cause this is my home.”

That makes it an excellent opportunity for audiences to be introduced to fresh rock sensibilities from new, visiting bands. “I think grassroots music fests, including Fuzz Fest, are vital because they provide a platform for groups to get more exposure, hone their craft and network with fellow musicians. I think there are an enormous number of talented musicians in our area.” And that, Taylor said, is incentive enough for everyone to get out to see shows and support local music.

“I’m looking forward to seeing all the bands and curating a kickass event.”