Estar Cohen Lives Fully in All The Moments of Music 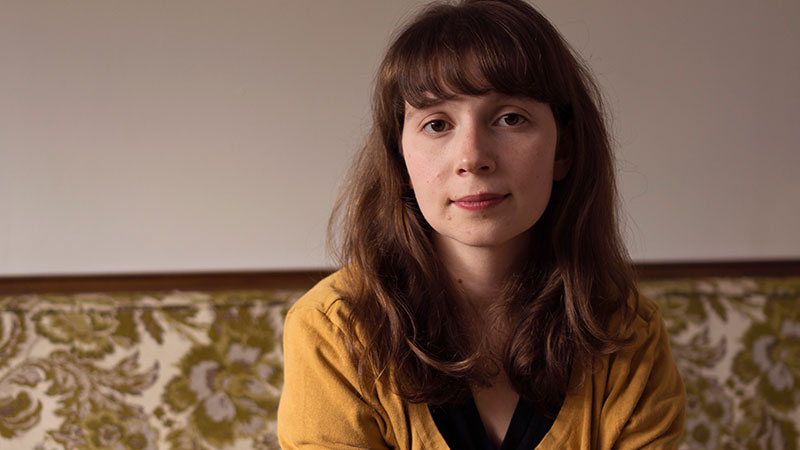 Just some lyrics from a composition called “Endings” by award-winning jazz vocalist Estar Cohen; and this propulsive image aptly fits for her music career, as each year since her 2015 graduation from the University of Toledo has gotten busier, faster, more exciting. You can add lyricist, arranger and educator to her resume, as well as award-winner: early in 2018, the ASCAP Foundation, in partnership with the Newport Jazz Festival, honored the Ypsilanti-based artist with the Herb Alpert Young Jazz Composer Award. When she isn’t teaching, writing her own solo work, or arranging music for her contemporaries, she also collaborates with A2-based ensemble Talking Ear.

“It was a dream come true,” said Cohen, to not only receive this honor along with an arts grant, but also the invitation to perform, last August, at the Newport Jazz Festival, along venerated artists like Jon Batiste, Andra Day, George Clinton, and more. “I have expectations for what I want to achieve creativity, but I have taught myself not to expect any certain recognition. In the case of the ASCAP Foundation award, I had actually applied multiple times previously and faced rejection. But, you just have to keep moving. I think dwelling on what you “think you deserve” can lead to bitterness as an artist. Instead, I try to focus on the work. When I learned I was selected, I was surprised and overjoyed. My advice for any artist; put your work out there. You never know when you might reach someone.”

She embraces that philosophy of arcing forward as time continues to bend—not counting on anything, but instead focusing on the current project, the next project, and onward. It wound up being “Endings,” a live recording at Willis Sound, that wound up tipping the scales of the judges toward Cohen.

But beyond her own work, Cohen also writes lyrics for other composers. “When you collaborate with another artist, you have to keep in mind that everyone has a unique perspective. As a lyricist, it’s my job to highlight that perspective.” I’m very visual, so I like to imagine stories or characters that maybe could go along with that mood.” Ultimately “you work toward the needs of the other piece,” she said, whether it’s something that needs to be “darker,” “more optimistic,” or whatever needs to be done to bring someone else’s “vision” to life.

Cohen has developed and diversified her skills to be able to work with a wide variety of styles, when it comes to composing or collaborating on an arrangement. She is, albeit, best known in the jazz circles, but her creative capacities are blurring past boundaries of genre categorization. For example, she recently scored the music for an adaptation of Sophocles’ ‘Antigone.’ Meanwhile, with her fellow musicians/composers in Talking Ear, she’s joined a challenge that they’ve assigned themselves through their new podcast, “On Creating,” where they compose and record a new original work each month.

Cohen emphasized her proclivity to be a “visual” composer; one of two very formative experiences for her starting the path toward being a songwriter was an exposure to and a blossoming appreciation for film soundtracks at a young age. The other key influence was her family.

“My whole family was musical. My parents, Alan and Donna Cohen, opened a music venue called The Happy Badger that fostered that creativity. As kids, my siblings and I had opportunities to hear all different kinds of artists, and to perform ourselves.”

“…But I also think films were a big part,” said Cohen. “When I think of all my favorite songs, I can pinpoint them to moments and scenes in movies. There’s a relationship there, not just applying a song to a certain emotion, but to a certain character, to people. There’s a depth there that stuck with me.

“From the start, I was passionate about writing my own songs. I was inspired by my older siblings, Sarah and Ben, who were already performing and recording their own music. I started to teach myself how to play the piano in middle school, and took it seriously from the start. I was lucky to have such encouraging parents and a supportive community of musicians coming up.”

An important aspect of Cohen’s story, she emphasizes, is the key role that mentors played in it. She studied under the late Professor Tad Weed, “and he treated me like I was an artist. Rather than saying, here’s how you have to approach this, or that there’s only this one way to approach something, he’d ask: ‘How would you approach this? How does this make you feel when you try it this way as opposed to another way?’ That’s what I try to bring out in my teaching. I think everyone can have a unique sound or voice, whether their singing, playing piano, or writing. I want to provide the tools to help someone along their path.”

Cohen’s own path continues, full speed ahead. But before we let her go, we have to ask her about jazz. “I first heard live jazz at Murphy’s Club in Toledo. I was drawn to the energy, but I didn’t understand it. It’s funny to remember not knowing whether I liked what I heard, because it was so unfamiliar to me. But, I had to keep coming back. I believe the more you listen, the more open you become; this is how I fell in love with the art-form.”

If you feel like you’re eager to fall in love with jazz, Cohen has a simple bit of advice. “Go out and actually see and experience live jazz! Go to Old Town Tavern on Wednesday nights, they have a wide rotating cast of really phenomenal jazz musicians. There’s Cliff Bell’s in Detroit and Aretha’s Jazz Café in Detroit, as well as Ziggy’s in Ypsilanti. “What’s special about Jazz is that you’re experiencing a unique moment in time. When you hear it in person, you’re a part of that moment.”

Cohen recently recorded a single with string quartet, The Red Shoe Company, that will be released in 2019. She is currently working on her next album, and continues to perform and teach throughout the US.