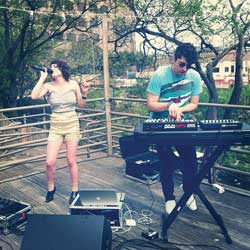 Current: When you’re making electronic music, is there an inclination, a pressure, …some expectation, to “make it danceable…”

Darin Rajabian: “…man, that’s a tough question. Let’s just start talking together and we’ll see if we answer it…”

In the beginning, there was acoustic resonance, classical forms… until Bob Moog modulated various frequencies and oscillated out into the ether. And he heard that it was good. The Acoustic Society of America claimed Mr. Moog was destroying music by propagating and expanding the possibilities of electronic resonance. Soon, ad hoc prophets took up his cause, Wendy Carlos Switched On Bach and Giorgio Moroder and Donna Summer helped the world “Feel Love” and Kraftwerk turned on The Man Machine. These days nobody debates the longevity of electronica—the genre is here to stay, and dominates modern pop music. The question is: in becoming pop music, has electronica lost itself?

Rajabian: “I think it’s a horrible idea to force electronic music into being a dance song. The song usually chooses for itself. It might depend on how I’m feeling at the time.” Rajabian writes and records with singer Caroline Myrick, as Ann Arbor-based synth-pop duo, Nightlife.
Meanwhile, Matthew Forbush (one-half of Grand Rapids dance-pop duo Alexis), sings about a “secret side” of himself that’s engaged by electronic music, letting him “be what he wants to be…” Forbush used to be a punk rocker doing "the guitar thing." But he loved to go out dancing. In fact, he noticed he’d be turning more heads with his moves on the dancefloor than any amount of attention garnered at a rock show with other fledgling punk-outfits.

Forbush: “There’s a stigma that electronic musicians are talent-less or not-real. Going into live shows, (Dan Hurst) and I overcame that perception. I do consider the listener when writing, like, is the BPM (beats per minute) just right? I love pop music’s tradition. We want to keep it fresh the entire time, keep that energy.

Josh Davis (a.k.a. Ypsilanti-area emcee and producer Jah Connery): “It’s funny how ‘large’ these small worlds get, with age. Modern Top 40 songs sound like things we’d tolerated at clubs in the late 90’s. Hopefully people hear Skrillex and then learn about Squarepusher (an intellectual electronic pioneer), then go back and learn about (influential 70's rhythmic band) Can and then (avant-garde composer) John Cage.”

"When a culture gets bastardized,” Davis says, "look for the benefits." For Davis, he’s “always thought of hip-hop” under the “electronica” umbrella – producing both “genres” (sometimes blending them on the same track). He looks back to late 70’s  pioneers like  Afrika Bambaataa or Mantronix, or, even Kraftwerk.

Rajabian is intrigued by modern dance-pop gods Daft Punk “totally 180-ing it” with their latest album, Random Access Memories and going to 70’s disco with live instrumentation. Besides, all that “super-compressed, side-chain kicks hurt your ears I run all my synths and outboards into real preamps. I don’t fake it. I’m all about real songs; (Nightlife) songs have chords, bridges, hooks, melodies. There’s a reason why we wrote it…”

Forbush, staying true to verse-chorus-verse writing over Hurts’ arrangements, is concerned “everyone’s going for that pop-club banger formula. Everything’s got this banging gay bar disco beat.” Forbush is all about dancing, but Alexis has some softer, more spaced-out ballads, too. To have to produce every song so big, banging and ostentatious, obnoxiously in-your-face dance-dance-dance every time, “…that…that might turn me off,” he says.

You don’t want to pander.
When Davis is “…feeling super manic and social,” all he can think about “…is grabbing a mic and really getting into the audience.”  That’s the emcee side of him. But then, “when I’m down, I get a lot more in tune with my instrumentals.” When Davis feels he has to justify his laptop to any “haters,” he reasons that it’s really just “carrying the record bag” for him, the human DJ. “I’m ready whenever for whatever.”
Hip-hop, indie-pop…“ It’s all-electronic now,” Rajabian claims. “Why don’t audiences accept it and enjoy it for what it is?”

Nightlife’s Days is available now while Jah Connery and Alexis are both currently recording, eyeing release dates toward the late summer / early fall.