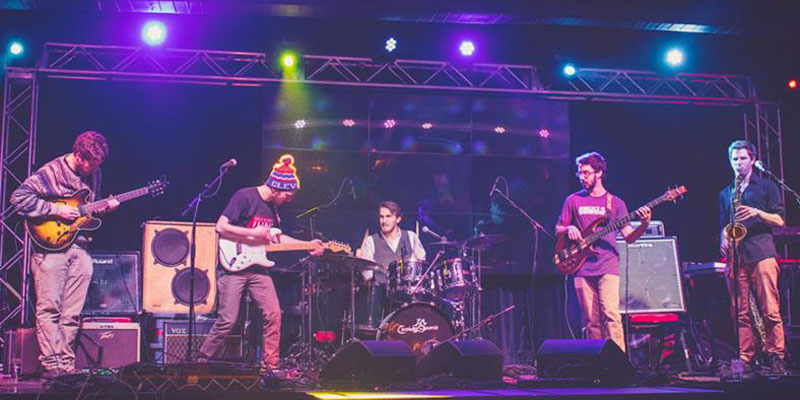 A good jam should never drag, and synchronized jam musicians, collectively fermenting the coalescence of a  jam should avoid the indulgences of noodling. That’s the kind of stuff I found myself talking about during my conversation with Grand Rapids-based ensemble Desmond Jones.

“You never wanna get lost in a jam,” said guitarist Chris Bota. “We’re very conscious of the flow of energy in a jam and we made sure never to noodle.”

If you’ve listened to some classic Wes Montgomery jazz, you might perceive the more and explorative phrasings of guitar, bass and drums to be, well, noodling. Desmond Jones may jam, per se, but it’s more a rock-n-roll-tinged clinic on myriad genres, from jazz to blues, funk to samba, indie-pop to soul, and back around again.

Bota said the band wouldn’t have acquired their tightly meshed harmonization if they hadn’t been so open to experimentation in their beginning years. “You’re never gonna succeed unless you’re ready to fail a few times,” said Bota. “That’s one of our many mottos.”

“A big part of what helped us, early on,” said Berkowitz, “is that we kinda love the chaos. In fact, we practice chaos. If we can learn how to move in and out of it (chaos) when things happen then we can make it part of the song and move and travel with it.”

The elements joining this team of musicians is almost a form of telepathy. “We’re at a point, now,” said Nowak, “where we just know each other’s musical styles and characteristics. After playing 150 shows in the last year, along with doing four hours on stage every Monday (at the Tip Top Deluxe in Grand Rapids), it really isn’t that much chaos; it just might sound like it to somebody in the audience.”

Desmond Jones took their name from my mom’s all-time favorite Beatles song (Oh-Bla-Di, Oh-Bla-Da). Nowak and Berkowitz have been playing music together since they were twelve. They met Bota, Loria and Falk at Michigan State out of shared desires to start a band, then cut their teeth as sufficient vibe facilitators at various house parties around campus.

The band really kicked into high gear in 2014 and 2015, hitting the road around the state while releasing two albums, (the most recent, Thick Cuts, came in late 2014). Last month, they ventured out on their biggest tour to date, reaching as far west as Colorado, playing 20 shows along the way.

“It’s cool to see how much we’ve changed,” said Berkowitz. “We never decided, at the outset, what style we wanted to play and we said we’re gonna be a jam band. With each of us listening to so many different things or each of us coming to the table with very different styles, it wound up with us being very open to trying new things, new genres and it all just happens naturally.”

“You don’t just find one genre anymore,” Bota said, reflecting on the wave of support the band’s been appreciatively receiving from fans. What audiences say after our shows is they notice how much fun we’re having,” Nowak said. “And they tell us that energy translates. We want people to have a good time at our shows.”