Toledo’s future beat/psy-jazz/hybrid electro duo Heavy Color recently premiered a new music video that commemorates an inspiring musical odyssey charted by one of its songwriters back in 2015.

The group formed several years ago around the collaborations of Ben Cohen and Sam Woldenberg. Their Toledo’s answer to cerebral ambient electronica acts like Four Tet, Caribou, or Detroit’s own Shigeto. It’s hard to describe what they do, really, because it simply sounds like it’s from the future! Trip-hop, world-fusion, and dreamy electro-jazz swirl together into a haze of warm tones and strangely beautiful timbres.

Their new album is called “River Passage.” It’s an intercontinental-collaboration between the Toledo group and Democratic Republic of Congo musician Thomas Lusango, along with musicians and signers from various villages surrounding Lake Kivu (borering Rwanda and Uganda). Whereas Heavy Color made an impression around the Great Lakes music community with their futurist-sound, this album draws from classic African funk and pop, with lust electronic textures and eclectic hip-hop-inclined beat arrangements.

In the late spring of 2015, Seth Bernard (Earthwork Music founder) asked Cohen and poet Akili Jackson (of Ypsilanti) to travel to the Eastern Democratic Republic of Congo to participate in an ongoing cultural exchange/musical ambassadorship program called ‘On The Ground’.’ Their goal was to continue that initiative’s work of creating meaningful connections across cultures through creative collaboration.

The album’s sales also benefit On The Ground’s projects in Congo that support gender equity and fair wages for women in farming regions, as well as the Ndaro Arts Center–providing a safe space for the city’s youth to learn dance, recording technology skills and receive music lessons.

That said…, we had a lot of questions for Ben after this new video.

Let’s talk about traditional world music and Afrobeat …and then electronic music or psy jazz. It can seem like most people might conceive the two as being diametrically opposed somehow, that the former is something that is by definition, “tradition,” and thus, in the past…, where as electronic music is always thought of as “futuristic.” How did Heavy Color develop into an aesthetic that blends both of those schools of thought?
Ben Cohen: Defining traditional music in itself is difficult since the line between past present and future is constantly shifting. Music is a fluid language. It is a conversation that crosses cultural and generational barriers carrying a little of itself into the constantly moving present.

Any time a music is heard and shared, it becomes a fusion of culture. And in doing so a new tradition is created. This was the case with Afrobeat. This was the case with Jazz and Techno and Rumba and so on…. In some ways I like to think of traditional music as music that has developed out of necessity. Music that was created with what is accessible to a certain group of people at a time and place. Hip Hop is traditional music as it was created out of a need to make people dance without access to a ton of instruments… just as Electronic music is traditional to Detroit and Chicago. There will always be new traditions. By relegating “traditional” to the past we are in some ways ignoring the voices of the present and future as if to say they aren’t traditional enough.

What inspires you to find that amorphous place between past, present and future…?
Cohen: The world is so interconnected at this point that there is a never-ending permutation of style and culture. By bringing the traditions, histories and personalities of any culture into this unavoidable fusion, we honor the legacies that came before us as we participate in that ongoing cycle and evolution.
“Arise Ye Spiritual Machine” recovers and re-contextualizes archival music. Can you talk about using the production of an album as a way of preserving moments, people, exchanges, and just impactful exchanges. I’m thinking of how this album becomes a sort of documentary of your time at NDARO and everyone you got to meet and work with…
Cohen: After we made Arise Ye Spiritual Machine, there was a moment where we realized we had no context for the original music that was being re-contextualized. I feel like a lot of modern music has an obsession with sounds that might be considered “exotic sounding” because they are from another culture and the learning ends there. We started to feel like that wasn’t enough. When I was presented with the opportunity to collaborate in the Congo and share stories and music, it seemed like the right evolution. I am part of an organization called Radiant City Arts that we founded with Poet Akili Jackson who also joined me in the Congo, and the painter Yusuf Lateef. We lead arts workshops that are meant to connect people via the universal language of the creative process.

When in the Congo, we listened, we shared, we found common ground in collaboration and in our personal stories. The quickest way to forming a meaningful and lasting bond is to make something together. As I said when I first returned from the trip in 2015 “As musical ambassadors, we were in the country to learn, share and break through barriers. We were there to amplify the stories, struggles, passion and talent that we saw, and relay back. To start a call and response between our communities and theirs.” That exchange hasn’t stopped.We have formed friendships and artistic relationships that we hope will continue long into the future.

I think the phrase “…the power of music” can be either something cynics might shrug off as cliche, or that others might just take for granted. But it’s the power of music, and the impact that you must have observed (music/dance) having on the lives of those at NDARO, that impact is what I hear on River Passage. For the cynics out there, can you talk about your most profound memories or moments or takeaways from the creation process of this album?
Cohen: ….a few moments that stand out to me….
When we first arrived, we were taken to a mountain town in South Kivu near Baraka. We were greeted by a whole village. They sang welcome songs and talked about the challenges they faced as a community. After the celebration the whole town gathered in a church on a hill. They were playing this heavily percussive music and singing… of course my first reaction was, I should record this music… So we go up to the church and ask if we can enter, Immediately we are told. “This music and this space is for our people. It is not for you.” This humbling moment has informed a lot of the process in the making of this record. There are things that are sacred that are not meant to be re-contextualized. Just because you are part of an organization that is bringing support and aid, doesn’t immediately grant you an all-access pass to a community. The making of this album has been a non-stop lesson in sensitivity and cultural awareness. We just hope that when the people who are featured on it hear it, they see themselves in it.

Another moment was when I was walking through this path through a mountain, there was a little kid walking with me. We didn’t speak any shared languages…. So we couldn’t really communicate. But I had this little flute and he was an amazing whistler… so we just carried on this conversation with rhythm. After a while we were both laughing as we completed each other’s musical sentences for each other.

Music is a fluid language. It is a conversation that crosses cultural and generational barriers carrying a little of itself into the constantly moving present.

What were some other stand-out moments, musical experiences you’ll never forget…?
Cohen:  Recording the young musicians from the mountain town of Lemera singing their song Pole Pole Tu Ta Shinda “Slowly we will Succeed” a plea to end the violence in their village……. Tears. So much heart. I still talk to some of those kids today. Also, they were some of the funkiest players. They held a dance contest for the whole village of Lemera as they played this super funky kinda highlife warba afropop…. They were overdriving the pa speaker so hard (which had this build in echo effect on it) it was so raw… The guitar player’s name is Martin Mahinanda from Uvira… The song Lemera was recorded at the welcoming party in Lemera.

And then.., just sharing stories. Hearing how similar the issues young artists face in Bukavu at NDARO and in Lemera are to youth here in Detroit and Toledo… Knocking down cultural barriers and coming out on the other side as creative partners.

What else, beyond location and your collaborators, made this album’s creation unique? I’m wondering about what the key elements, key moods, key atmospheres were…, what was it about any one song, or the album as a whole, that assured you it was done, that it was there, it was right, it was ready…what was key to its completion?
Cohen: The first song we touched on was actually the last song we finished. “Together on Three.” We created a sketch for that before we officially started the project. We were searching through ideas to find the perfect final song and we stumbled on that sketch… it just felt perfect. We sent it to Thomas Lusango in Bukavu and he sent back a chorus of singers from Ndaro singing with us and it really felt like the finale. Originally we were sending hard-drives back and forth via our Non-Profit partner On the Ground…. So we had to wait for months at a time to get files to and from Congo. Once we figured out that we can use Facebook messenger to send small audio files, things moved so much quicker. Language has been a challenge… I think there are over 6 languages/dialects on this album. We have gotten multiple translations for the same song… depending on who we ask.

What are you up to lately? Or what are your plans for the year ahead?
Cohen: We are currently raising awareness for the single Hidden Kingdom which is available on our bandcamp. 100% of sales of that song are going to help support the NDARO center in Bukavu which suffered a devastating fire in October. They lost all of their recording equipment and instruments and are essentially starting from scratch. 60 percent of sales from River Passage go to support the communities in Congo we visited as well as the NDARO Center but 100% of sales from the single go to NDARO.

And we are really grateful for our partners On the Ground and Earthwork music for making this project possible. They are doing really amazing work to support gender equity in farming regions throughout Eastern Congo built on a foundation of gender and social equality, environmental sustainability, and economic security. www.onthegroundglobal.org and Earthwork Music doing so much good in Michigan whether it be for Water Rights or Music Educational initiatives. www.earthworkmusic.com 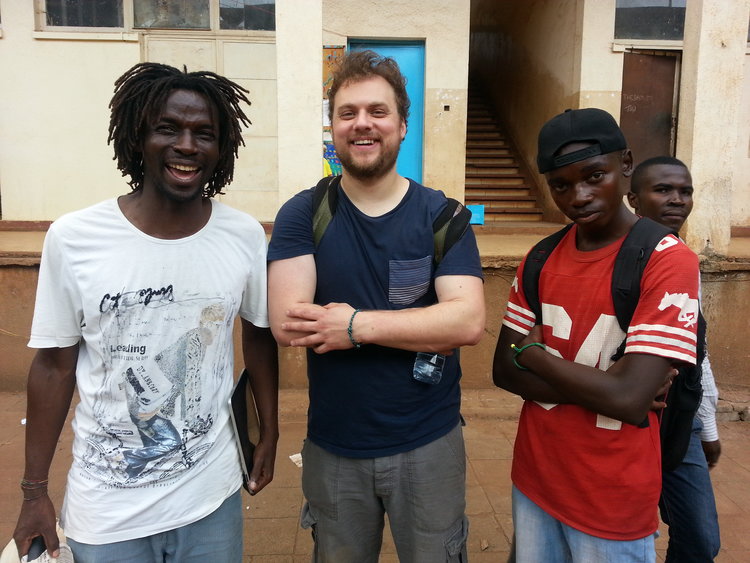