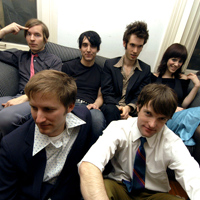 Today kinda feels like a Saturday to me, ya know? The time’s right, it’s sounding right, maybe just go with it?
Now, anyone who’s been following the Ypsi/Arbor music scene for even a short period of time, will likely have heard Fred Thomas’ name, or one of his many records, or even met him by now. Maybe you’re one of dozens of locals who’ve recorded / performed / toured with this label-head / songwriter / artist.

Outside of the mitten, though, he’s probably best known as the offbeat orchestrator of chamber-pop collective Saturday Looks Good To Me, whose surreal summertime chimes, (sweetened by blends of shuffles, gentle guitars, earthy strings and rich reverb,) warmed hearts for the first seven years of this century, through a handful of distinctive, delightful, atmospheric albums, eclectic in arrangement while charmed by nostalgic pop jams.

Last March, Saturday Looks Good To Me (SLGTM) reawakened after four sleepy years, reissued old recordings and then made new recordings, (they even released an on-the-fly cassette recording). And the fans reconnected. “It’s almost like we waited just long enough for people to realize we were gone,” said Thomas, looking back to their last album, 2007’s Fill Up The Room, “and that they missed hearing our sounds. In the sped-up modern age, the curb for nostalgia has shifted a little bit, I think.”

“Our Internet presence and popularity is slim to none,” Thomas said. They certainly weren’t a “new” band, but also not some buzzed about band consistently mentioned in the hipster blogosphere. “But everyone who has latched on to our sound seemed to come out in droves and they have really appreciated our return.”

Re-issue, re-union, return, this used to conjure stigmas of strategic opportunists, Van Halen or Jane’s Addiction types looking to re-nuke past glories. But for Thomas, often working on multiple projects at any given moment, it becomes about just that: The Moment, the time when it feels right.

“It’s hard to think of events influencing the music one makes as much as the music is one-of-the events, or a composite of events. I always make songs, play music and do other art stuff to get to the bottom of whatever I’m dealing with in any given time.” SLGTM, Swimsuit, City Center or any other band/project are all “just trying to encapsulate how it feels to be alive in this particular time.” Most importantly, the “vibe” of the tour was “more like old friends reuniting than going to see some 90’s band play their one good record front-to-back.”

Following their last live performance (in June 2008), Thomas would be asked whether the band was truly done.  “I didn’t really have an answer or reason for not playing except that I was in a different place and reflecting that place with that art that I was making then. Now, I’m nowhere near that same place,” (i.e. sunshiney-pop songs and listening to the Beach boys every day), “but it still feels, somehow, like a good time to play this music.”

SLGTM’s next (as yet untitled) album comes out in March 2013; a batch of all new songs “assembled more than written,” sounding like “a logical step in the paradoxical nature of the band.” What stands out, likely, is Thomas’ letting-go of stressing-out over how “Saturday” fits into a bigger puzzle or even how to explain it to people. “It’s grown into its own kind of thing.”

SLGTM will release a single, “Sunglasses” later this autumn, complete with a music video. SLGTM.com