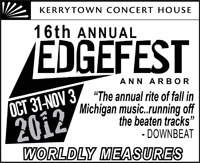 The advent of autumn means the return of our vibrant student community. It also means more major concerts and the annual Edgefest celebration of progressive improvisational music. Plenty of excitement awaits in October and November, so let's dive right into the thick of it!

UMS will sponsor a pair of great shows in November. Gilberto Gil will play Hill Auditorium Friday, November 16 at 8pm. A legendary founding figure of Brazil's Tropicália movement, he is a fluid guitarist with a beautiful voice and an unabashedly loving stage presence. The program will present the music of northeastern Brazilian folk songwriter Luiz Gonzaga. Gil's septet features guitars, strings, accordion and percussion.

The Ark will also sponsor November shows that should appeal to readers of this column.

Detroit's Bettye LaVette is a no-nonsense soul singer of terrific emotional power. She will hit the Ark Wednesday, November 7 at 8pm.

Louisiana native Sonny Landreth will bring his amazing guitar technique and soulful skills to the stage Sunday, November 11 at 7:30pm. Eric Clapton proclaims him "probably the most underestimated musician on the planet." Uh-huh.

Boogie-woogie, blues and jazz pianist Mark Braun, better known as Mr. B, will bring a cornucopia of keyboard delights to a Thanksgiving boogie celebration Saturday, November 24 at 8pm.

At the Kerrytown Concert House

The run-up to Edgefest has several great acts set to play the friendly confines of the Kerrytown Concert House, where artists perform in our collective living room.

The Paul Keller Quartet featuring Sarah D'angelo has a CD release concert for "At Sundown," scheduled for Friday, October 19 at 8pm. Bassist Keller is joined by pianist Duncan McMillan and tenor sax wunderkind Ben Jansson (perhaps he is a qualified "journeyman" at this point!). Their featured guest Sarah D'Angelo plays clarinet and sings.

Sophistication and swing will be the order of the day when the Freddy Cole Quartet plays two shows Sunday, November 11 at 4:30 and 7:30pm. The surviving brother of Nat King Cole also plays piano and sings, and has established a deep catalogue of his own recordings. His working band includes Ann Arbor native son guitarist Randy Napoleon. Warm, thoughtful and "muy romantico!"

This year's Edgefest takes place at the Kerrytown Concert House Wednesday through Saturday, October 31 through November 3.

The final day of the Edgefest will include Wadada Leo Smith's "Ten Freedom Summers – Part II" on Saturday, November 3 at 4pm. Native American multi-instrumentalist and vocalist Mary Redhouse will wrap up the Edgefest with a duet performance with bassist John Lindberg Saturday night at 7pm.

A final word of thanks in advance for your ongoing support of WEMU 89.1 FM. We will be swinging into our Fall On-Air Fundraiser — the biggest one yet! We appreciate your necessary help in maintaining this audio jewel of jazz and blues. You are WEMU! Yeah, you!