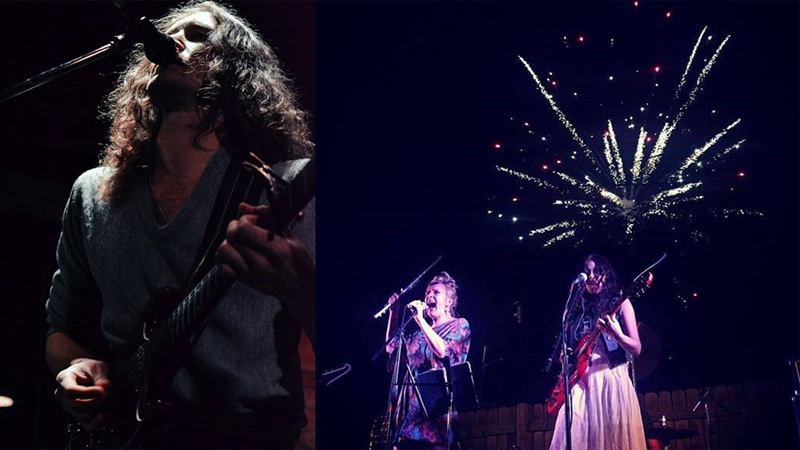 So this is ‘a thing,’ now… We’re posting updates on local music, via Interviews and Reviews, on Monday evenings of each week. I’ll consistently be checking in with regional bands and artists who have events or releases coming up in the very near future. While the main goal is to give you more deep dive long reads and full-scope profiles of these artists, I am, instead, doing more of a rundown today…

And I’m starting with the Ferdy Mayne.

The Ferdy Mayne used to be a local outfit, lead singer/songwriter Shane O’Malley Firek  (pictured above, left) was based here in Ypsilanti. A handful of years ago he left the Mitten state and turned into more of a vagabond between other cities, but he never stopped writing songs and experimenting on music. The Michigander wound up settling in Brooklyn in the last couple years and got his band going again, with Galen Gatzke, Harris Karlin, and Nick Rapley.

That’s a new single from September. Meanwhile, here’s an oldie from their catalog, even though they’ve gone through several iterations since this song was written, it’s still one of my all-time favorites.

Anyhow. Another reason I’m talking about Ferdy Mayne this week is that Ypsi outfits like Congress and Mom Barley are performing with the NY group over at the UFO Factory this Saturday. Windsor’s pop wunderkinds Border Patrol are also on the lineup.

The last line of their new single (“Real Shackle”) resonates with me, the part about never finding your place. Shane was always on the move, and his music could never be pinned down into any genre or place. The twangs and riffs sounded like country-folk, the warbled sing-speak-howl vocals could be bluesy, the solos could be psychedelic. The band is as splendidly chimeric as ever on this new single, so stay tuned for more this season…

On Friday, there are two cool Halloween-themed concerts/parties to consider. Yes, I know it’s about a week early, but I know most of you already have costumes picked out. Worse case? Just zombify yourself! Tear up some clothes, pale your skin, get some fake blood, growl… Done.

Arbor Vitae
Psyche-rock explorers Wiccans (pictured above, right) join a lineup with the “aleatoric goblin jazz for the end times” of James Cornish and Sara Grosky. Also on this Black Mass program is Demonic (Platonic) Boyfriends and Shades. Thom Elliott is scheduled to perform an “actual” Black Mass, and potential attendees are warned (or encouraged) that there will, indeed, be some “unsettling elements…” Dark Lord Isaac Levine provides aural ambiance. Black attire is encouraged, as well as a cover charge of $6 and .66¢.

“Haunted House: The Show!” The Ring of Steel Action Theatre are a talented troupe who have charmingly entertained crowded lines waiting patiently to enter various haunted house attractions. This is an outstanding idea; providing exciting and even shocking theatrical performances that could even rival the Haunts these folks were waiting to get into…

But how about cutting out the need to wait in line at all? Why not take the idea and make it into its own art exhibition. While they typically specialize in Renaissance Fair-friendly fencing and choreographed stuntwork, they’re versatile enough to also take on sci-fi conventions, movie openings, and yes, haunted house-styled feats. You can anticipate “dancing zombies,” “bickering grim reapers,” exceptional circus acts and, my favorite, “flesh eating celebrities.” You can also prepare yourself for pyrotechnics, startling sounds of considerable volume, and some potentially monstrous language. But…BUT…. Also cider & donuts. You can’t lose… You just might have to duck, here and there; keep on your toes.