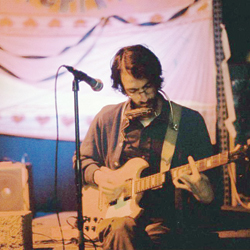 For Jim, it just wasn’t weird enough out there. That’s partly why he’s been so busy this year, with music and illustration: writing, recording, sketching and screaming.

Jim Cherewick’s an obtuse staple in the Ypsi/Arbor music scene, (and the art scene, too, really). A genial, bearded, down-to-earth dude, Cherewick’s a singer/songwriter type who scribbles lyrical lo-fi pop-chestnuts over acoustic guitar. Others, though, might recognize him as the tall, rail-thin frontman wobbling valiantly and violently atop live sets for the post-punk grooves of Ypsi rock quartet Congress.

Still others might have even used Cherewick’s art to dab away droplets of mustard from their mouths. Indeed, much of his intriguing pencil-sketched, hand-drawn caricatures (often glossing the pages of local zines and National Geographics) have been captured on napkins. He even had an entire art show, recently, exclusively featuring works from his napkin-portfolio.

Having just wrapped a month’s long run of his work (drawings and posters) exhibited inside Ypsi’s Café Ollie, Cherewick’s lookng forward to finishing up (and releasing) a proper solo-LP (tentatively Heavy Chalk),

He says all spring and summer he’s tried to embrace a “GBV mentality,” referencing iconic indie-singer/songwriter Robert Pollard’s beloved lo-fi pop group Guided By Voices’ proclivity towards prolific song-production. With drummer R. Michael Stinson backing him up, Cherewick tries out a straight pop song, but then a dark, dirgey campfire singalong, and then maybe “…reciting the alphabet backwards over a low drum beat …that's exciting!” Why not?

“Keep getting weirder,” is a phrase that bends my ear, during our chat, bar-side by the window at the Ugly Mug. (He’s even drawing while answering questions). He thinks that if hang-ups or self-doubt or useless clinging to traditional forms and methods could be dropped, then, easily “people could kick more odd ideas out there.”

And should. Cherewick’s got his demos up on his soundcloud, if you’re intrigued. Or, check out Congress’ bandcamp site to sample songs from their second EP, Maker. This writer, if prodded for a Best-Of list from 2012, would include its opening single, the wavy-wiry “Holy Roller,” featuring, atop the rollicking rhythms and surf-timbre guitars, the characteristic yowl of Mr. Cherewick.

To produce the surfeit of slightly strange, uncannily catchy folk-pop fare featured on Heavy Chalk – Cherewick unconsciously took a “musical fasting” — sparse in-takes (if at all) of music while just drawing and writing in meditative solitude, blissfully unaware of the cutting edge indie-scene.

“And that shows you a lot,” says Cherewick. “Sitting with your brain free of musical influence, it’s cool to see what you can do.”

Cherewick provided his own Best-Of-2012 list for me (and this column’s readers): Citing locals like The High Strung, Isles of E.S.P., Fred Thomas and Protomartyr (the latter’s latest single is titled “Ypsilanti”). But also, some not-so-surprising citations like the latest Guided By Voices, mixed with healthy blends of hip-hop (Why? Serengeti).

“I just wanna get weird,” says Cherewick. “But then, also, make you cry sometimes; ya know, to show you that you have a heart and that you’re human. We all wake up and we all freak-out sometimes…”

So translate that freak-out, Cherewick says, beyond the typical heart-on-the-sleeve folk stuff. “You can do other things with it, make it dark or biblical or whatever but also beautiful. I’ve tried as hard as I can to make it completely abstract, yet make it make sense…”

Find Jim’s work online (via Soundcloud) or, more likely, on a random show-poster. Or you can find him at the coffee-shop. He’ll be the one sublimely doodling away…