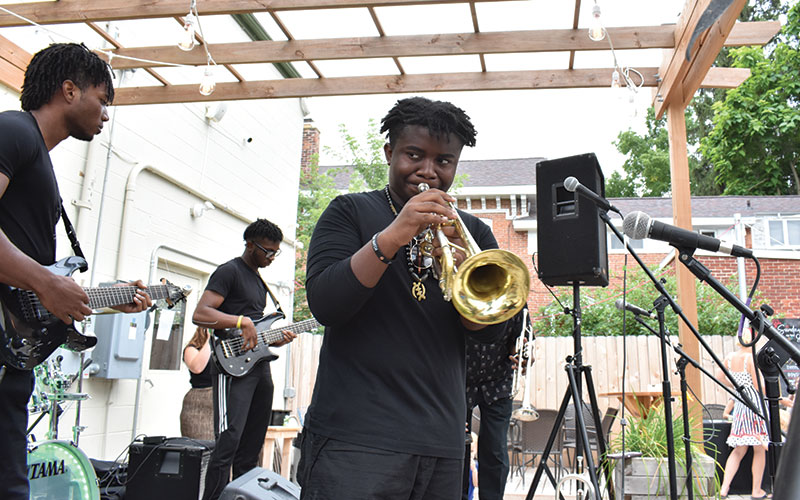 When Ryan and Bekah Wallace look back on their years of overseeing Ypsilanti’s Cultivate Coffee and Tap House, they keep returning to one word: adapt! “There continues to be a lot of aspirations for what Cultivate can be,” Ryan said, “but when you start something like this, you’ve gotta leave some space to adapt.” Cultivate’s versatility makes it equal parts coffee shop / brewpub / music venue / community garden —“And I think one of our big challenges was wrapping (Cultivate)’s ‘brand’ in a way that could say: ‘Hey…, this is who we are. BUT, that doesn’t mean we’re not gonna continue to evolve…!’

But that ability to ride the tides only helped them flourish. Customers and staff have gravitated toward the Wallace’s vision: a something-for-everyone kind of social entrepreneurship. While you can come for the coffee, the beer, or the live music, it can also be a meeting space for community organizations, a place to support local causes like Ypsilanti’s Meals on Wheels, or an opportunity to learn about, and get involved with, a range of issues, including local efforts against hunger and food insecurity.

“What’s really directed a lot of what we do is the people,” said Bekah. “The people who come in and interact with what we do, whether that’s through a product, through a cause or a community organization that we’re partnering with, or if it’s through one of the many meetup groups like (Monday Knitting Night); you can’t really write a roadmap for that.”

While conventional start-ups eventually need capital to expand their business, Cultivate’s case is different, because the “business” is networking community non-profits and the “capital” is, well, us, the people! “We’re always reevaluating the space and how it’s serving the customers and how it’s serving our goals, both the quantitative and qualitative goals,” Ryan said. Part of what makes Cultivate unique is that Bekah and Ryan see their goals always shifting more towards the qualitative. “That’s people,” Ryan continued. “We’re always rethinking how our space can change for the better, for serving all people.”

“For things to grow, you have to adapt,” Bekah said. And now the duo are adapting their own roles, moving from behind the bar and tending the structure, toward mentoring their growing and supportive staff, empowering them to identify needs in the community and encouraging them to be part of solutions. Cultivate, in that way, is like a hub for solution seekers; or a laboratory for dream experiments…But, again, while also pouring some great coffee and local brews!

The Wallaces have been together for almost 20 years, and each have an equal number of years’ worth of entrepreneurial experience. The early idea for Cultivate came about six years ago. While the space has allowed for the growth of not just local food, but nonprofits, it’s also become a live music venue—adding “supporting local artists” to its ever-fluid mission statement(s).

“This may sound weird, but I’ve always considered myself an artist,” Ryan said, speaking as an entrepreneur. “Because I think anyone that’s hoping to create something that will connect with people is an artist. But we’re also always trying to find out how we can support more people that are doing that in the world.” The Sundays In The Garden live music series is another way, said Bekah, that Cultivate can support others trying to achieve positive things in the world.

A part of something bigger

The intent is to evoke a sense of belonging in anyone who enters Cultivate. Daily scrolls through social media can render discouraging headlines that are pungent with cynicism and divisiveness. Bekah wants everyone to turn off that noise and come to Cultivate’s physical space, where they can feel “a part of something bigger.” And that brings us back to dream experiments—the Wallaces say they have no intentions to expand with secondary locations (following a franchise model), but, rather, they hope someone else replicates Cultivate as “a template for social entrepreneurship” for their own craft, cause or business.

Singer/songwriter May Erlewine will be joined by Misty Lyn Bergeron and Matt Jones to perform on Sept 2nd, the culminating concert in their Sundays In The Garden series, just one of many ongoing programs and regularly scheduled events hosted at their space on River St in Depot Town.