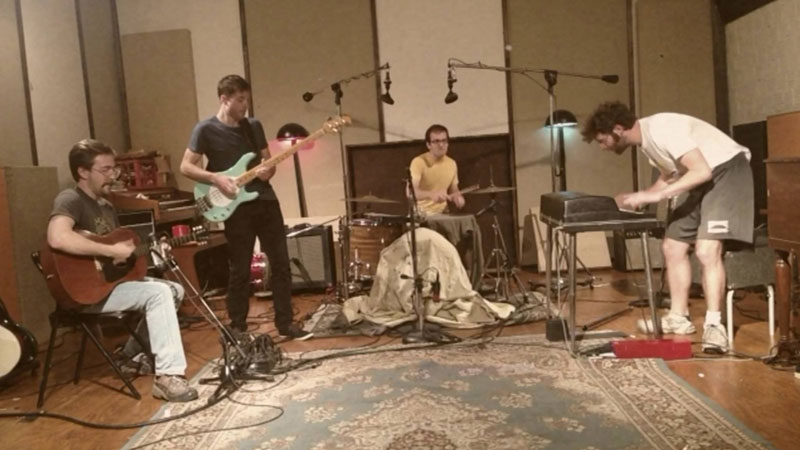 Ballads and soloing are for showoffs. All you really need is groove. Vulfpeck, an Ann Arbor-born quartet, fashioned after rhythm sections from the Stax and Motown heyday, follow this simple but unbeatable formula: minimalist instrumental grooves that keep it tight, live, and fun.

“We cut Vulfpeck to be a project where it is fun to make recordings. I mean, to nail a take, live, and just know that it’s done versus that weird digital vortex of perfect pop music with all its screen time spent fixing pitch correction or beat correction. Making records this way for us is really rewarding.”

Stratton, with fellow U-M alums Theo Katzman, Woody Goss and Joe Dart, made headlines last April when they pulled the rug out from under the compensatory formula for artists featured on the popular streaming service Spotify.

With their Sleepify album, Stratton took to YouTube to encourage fans to stream this silent album throughout the night, thus massively racking up the royalties. At a miniscule .0005 cents per song and enough fans streaming, they successfully raised enough money to finance a national tour for which they offered free admission. Spotify pulled it after one month.

“Ya know, sometimes I catch myself whining about streaming music and the state of everything,” said founding member Jack Stratton, “but I look at the group, to where we’ve self-released (four EPs) and built an international fan base all for a couple hundred bucks of promotion? It’s insane. And winding up owning every penny of our masters and publishing, that’s strange. I don’t think that’s typical for bands prior to the internet.”

Their tight interplay, the palpable chemistry and preternatural abilities to read each other sounds effortless and, if you see them perform, looks like a lot of fun. Their latest, Fugue State, exudes their characteristic shuffling, snappy drums under curlicue keyboard melodies, leaving plenty of space for the bass to thump its soulful phrasings and the guitar’s subtle vamping to chip and chop its way in and out amid the driving groove.

Stratton says they’re just plugging into that feel-good vibe of the bygone-era Stax/Motown classics like Jean Knight’s “Mr. Big Stuff,” Stevie Wonder’s “Superstition” or The Four Seasons’ “September, 1963.” Those jams came about with “live tracked rhythm sections,” said Stratton. “So, it’s not some artist hang-up for us to do it this way, it’s actually the way many of the best feeling songs have been made.”

Whimsicality plays into Vulfpeck’s charm as well. This past holiday season, Stratton and the crew tried their hand at a Christmas pop song in an effort to gain membership to The Westside Jewish Community Center. Apparently if someone pens a Top 40 Christmas song, they’re granted immediate free lifetime membership at the WJCC. Hence, they recorded and released the playful, sunsplashed yuletide jam “Christmas In L.A.,” featuring Katzman on lead vocals and David T. Walker on guitar. It works year ‘round, actually, and you can find it on Spotify.

"I love instrumental music,” Stratton said, “but it's very obvious that adding vocals (with "Christmas In L.A.") gives it a broader appeal. My mom wasn't jamming on the Christmas song, but then with the full track she's playing it at her spin class and sending it around."

This year, expect the group to record more funk with the marvelous vocal talent Antwaun Stanley, produce more of their charming lo-fi conceptual YouTube videos, and finish a new record with a subsequent tour. “So, we’ll just fall into whatever momentum we have and…maybe, try to rein in some international money making
scheme again.”