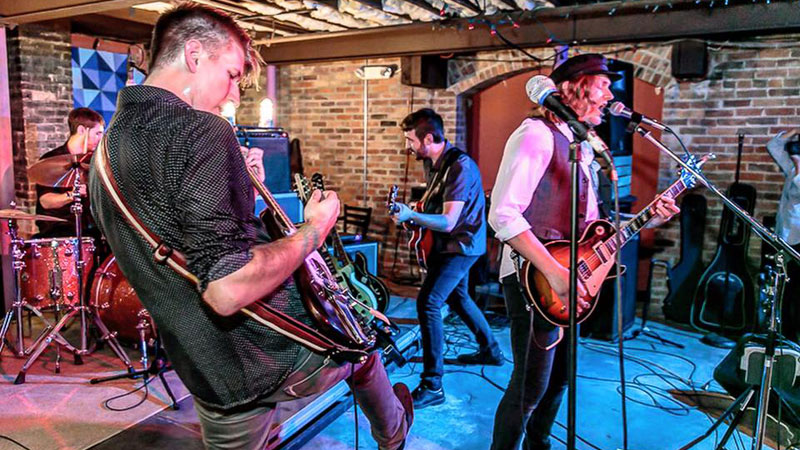 Captain Ivory may live in Nashville now, but they’ll always be a Michigan band to me. Truth be told, these days the quartet kinda lives on the road, and Nashville’s just where they come for their laundry. We’re talking with the band towards the bottom of this article, particularly about the pluck and confidence it takes to push oneself, (or one’s band) into the unknown “beyond” of hardcore touring…But we’re also here to tell you that they’ll be at the Ark in a couple of weeks.

Up until the autumn of 2014, this was essentially an Ypsilanti-outfit, specializing in a blend of spacey indie-pop, 70s blues and soulful psychedelia. Captain Ivory’s website has this catch phrase that’s just too apt to deny… “Greasy rock ‘n’ roll meets Motor City Soul.”

Captain Ivory released their second album, No Vacancy, back in May…take a listen:

What I dig about Captain Ivory’s latest batch of songs is that it can be swaggering at points, cerebral at others. There are muscled crescendos that know when to give space to softening harmonies, squalls into calm seas. There are indulgences into classic barroom poetry with its coarse surfaced coolness and a sensibility for coiled rhythms and furtive hooks that, by design, coax a populace out of their seats to move around a bit, (dance if you like…). There are also those heavier, more cinematic moments where the guitars swell into a dizzying layer of tones and the bending creak of that voice evokes a relatable pain that pulls its way up toward restoration. I mean, there’s something hauntingly beautiful going on in the bridge of the title track… But, at the same time, it’s just cool, kicking, tough rock ‘n’ roll.

That’s what I hear, anyway. But it’s much more enlightening to hear it from the band themselves. Jayson Traver is the lead singer and guitarist, Brett Smith plays bass, Seth Maschari is on drums and Robbie Bolog is the lead guitarist.

Before we get into the Q&A, take note:

You have been in Nashville for a bit, now… How do you like it? The vibe I’ve gotten is that it’s this a hub for a lot of bands who are keen to be continually touring…

Robbie Bolog: We had talked about moving for about a year leading up to our relocation in the summer of 2014. It's anything but the country scene everyone sees when they visit just to spend a weekend on Broadway. There's more rock clubs than I can count and a real sense of collaboration and support that I've never felt while visiting LA or NYC. The Ypsi and Ann Arbor scenes are fairly collaborative as well, but the other, more tangible reason for moving, was, as you said, with regards to touring. Moving to the center of the country has opened up a wide range of new places for us to play. Driving four hours in any direction from Nashville puts you in another major city and that's been crucial for us.

That’s a big step…Well, it’s one of the biggest step, actually, that musicians can make, ya know? “Going for it…,” as it were…

Bolog: Yeah, I'm really proud of us for all taking that leap of faith and moving down together. It's a huge life change to leave friends and family, but it really set the tone for how serious we are about making music the number one focus. That said, we’re still out playing MI and the midwest every three to four months and definitely miss it.

You guys toured Europe, as well… I know bands like The Muggs find a lot of fans over there. How’d it go for you?

Brett Smith: The audiences definitely had an entirely different energy and it was amazing to have the opportunity to connect with them. Historically all music that has any type of "Blues" or "Rock n' Roll" influence stems from some sort of noise that was created in America, so it makes sense that we sound like an American band, Midwestern-accents and all. We spoke to everyone that we could there and many of them were very curious about how both Michigan and Tennessee have helped shape our sound. I also think most were both intrigued and refreshed to hear that our most prominent influences come from the Northern side of that spectrum.

Tell me about the recording experience for No Vacancy. It’s evident you were going for more than just another blues record…

Jayson Traver: I have always been a huge fan of art rock, because of the textures and spaces they can create whilst presenting a solid song. Much of Radiohead’s work is a shining example of this. They don't just create a song; they create a world to live in while listening. I wanted to try and infuse a little bit of that into our album. Anyways, we recorded two songs here in Nashville with a talented young engineer/producer named Evan Redwine. He had an abundance of great ideas, and was always open to try out some of our wilder ideas. The rest of the album was recorded to tape at Postal Recording in Indianapolis. It's a fairly new studio that our friend and co-producer Jake Robinson runs.

We have never recorded to tape before, and wanted to see what the hype was about. I think we spent a total of 4 weekends recording the rest of the album. Jake had a lot of great ideas, and I think he really understood what we were going for. He also had a masterful knowledge of all things analog.

What’d you appreciate most about the analog sound?

Traver: There was definitely rawness in the sounds that we captured at Postal, and that was definitely a huge part of our vision. We also set out to make a huge sounding album, something that sounded fit to be played in a large room. My friend Matt Coles and I worked to widen out the sound of a couple of the more spacy tracks and focus some of the more straightforward ones. In the studio, there is a fine line between spacious sounding and muddy, but with Matt’s help I think we avoid the latter.

Going back to that big jump a band’s gotta make to go for the …pardon the air quotes again… the “big time…” Tell me what’s been your biggest take-away, two-years into moving to Nashville, what’s been a vital lesson or an important philosophy you’ve had to continually remind yourselves of, as you progress…

Bolog: Jayson and I talked about this while writing the lyrics for (the title track). We've had after-show drives at 2am where you just need a shower and a bed, but every hotel you find is either booked, or charges by the half-hour (there's a lot more of those than you'd think). That uncertainty and chaotic lifestyle isn't for everyone. It's weird, but in a way those are kind of the things we thrive on. That whole song is a metaphor for that. I guess there's probably something a little off with us. Check that, there's definitely something wrong with all of us! If you don't do it right though what's the point?

After your show at the Ark, what’s up next?

Bolog: We’re heading back to Europe in December, and are looking to build on the foundation we laid with last year’s tour. Out of all the touring we’ve done we have yet to tap into the festival scene, so that’s a definite goal for 2017. We still rehearse at least twice a week and spend much of that time exploring new ideas, learning new covers, and figuring out ways to continue improving the live show. You want to give people a reason to keep coming back, so we’re definitely cognizant of stepping it up every time we go out to play. We’re just grateful folks are continuing to come out and support live music!