A Sense For It All 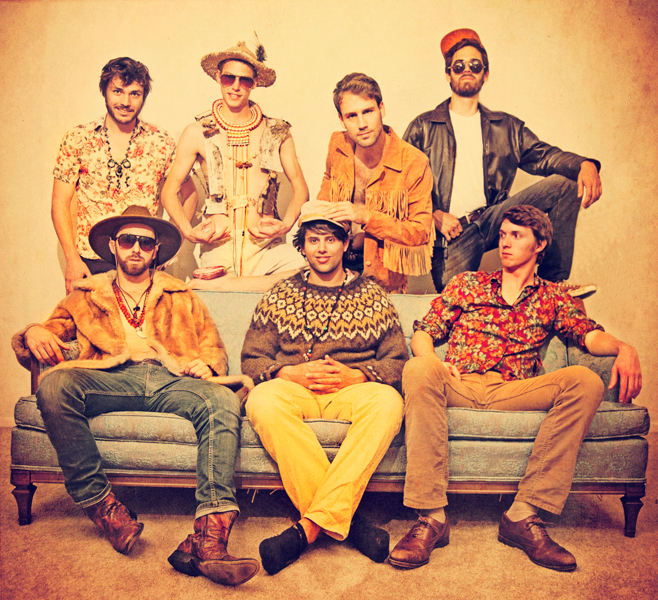 Joe Hertler knows you’ll understand. Just listen to one of the Rainbow Seekers’ songs. Or, better yet, come to a show. Listen. Participate. That’s it. You’ve got it.

Hertler hope’s he isn’t sounding too “out-there,” “nerdy,” or “cheesy” when he’s talking about his band and the music they make. He says he feels like his brain rewards him for bringing people together at shows. “My brain says: good job,” he chuckles at himself. “Something inside of me makes me feel really good when I play music for somebody and share my experiences and connect.”

The band jumps all over the place, in terms of genre. They employ elements of rock (guitars,) folk (acoustic, sometimes), and even jazz (sax/flutes).  The Current could maybe whittle it down to a groovy kinda folk-rock or maybe a spacey-soulful indie-pop road-trip soundtrack, but that’s just for starters.

Those brief self-depreciating winks he gives (along with revealing his roots with a “really crappy metal band” and how World Of Warcraft played a role in helping him find future bandmates) are all integral to The Rainbow Seeker’s charm, this inherently endearing, down-to-earth air about them and their music that’s altogether  engaging for audiences.

Hertler grew up in Lake Orion and currently lives in Lansing where he works in education. He spoke frankly of his nuanced sensitivities, to the feelings of others but also to the melodies and harmonies of a piece of music. Hertler is keenly aware of how songs, with the right tones and the right lyrics, can spark a vital connection throughout a crowd of people. In fact, if he has a purpose at all with music, he says, it’s to make as many of those special connections with people as possible. That’s primarily the aim of his songs, augmented beautifully by the talented players in the Rainbow Seekers (with Kevin Pritchard-bass/backing vocals, Micky Bracken-keys/backing-vocals, A. Stinson-Sax/flute/backing vocals, L. Ron Hoggard-guitar/backing-vocals, “Pinetop Deadfish” on drums and J. Holcomb on viola/violin).

“This is what I have…” Hertler says, referring to his songwriting and his several recorded releases to date. “I suck at most things in life but music’s the one thing that I can make sense of and it’s how I connect with people.”

It’s rewarding to bring massive groups of people together to “form a society” at a show, Hertler says, thus “strengthening these social bonds.” In fact, that’s exactly what he felt years ago when he had to fall back in love with music, again, right into his Freshman year at Central Michigan when he quit the orchestra. Academic form had worn him out, so he put down his cello and just waited for inspiration to spark again. It came at a show with locals Anathallo, Those Transatlantics and Detroit-based Javelins.

It was revelatory for Hertler and he dove into the local scene from there. “I looked up to all these people at that time when I was just starting to…I don’t want to say ‘find my own sound’ but I was looking for that, yeah. Anathallo, (Chris) Bathgate…the first vinyl I bought was a Hard Lessons record signed by Augie (Visocchi) at a live show. And Frontier Ruckus, with (Matthew) Milia’s songwriting, linked to the geography of my hometown. I really connected with that.”

He started playing coffee shops but it wasn’t until he was fatefully booked at a Mittenfest a few years back where he started forging the relationships with his current bandmates. “I have a band now and fun things are happening. We finally all paid rent with our first check from just playing our music. So fun things are happening now. I feel like everything sorta blurred together.”

There’s a strong bond between the Rainbow Seekers, Hertler assures. “It’s a bunch of buddies,” he says.

Looking back years now, to that first Mittenfest, he’s glad to say that “they’re my best friends, to this day. We’ve added three more pivotal musicians since then. We have a sax and viola now. We met through, just, friends of friends. That makes for a nice dynamic within the band. It all feels like one big joke, kinda…and then all of a sudden, the music happens.”

Always quick to bring himself back down to Earth, he calls his backing players “above and beyond” when it comes to their talents. “It’s humbling, I get jealous of them actually.”

When we ask him to pin down influences, he admits that despite the elements of pop, folk-rock and indie-psychedelia, his true passion is dance music, house, techno, raves, even. His mom was really into disco.

“There’s a flamboyancy to what we do and our music and when you ride on that without trying to sacrifice the honesty of it, there’s just a wide range of emotions to be felt, really and we try to move through a whole bunch of them inside one set. We also just want people to come to our shows and have a good time.”