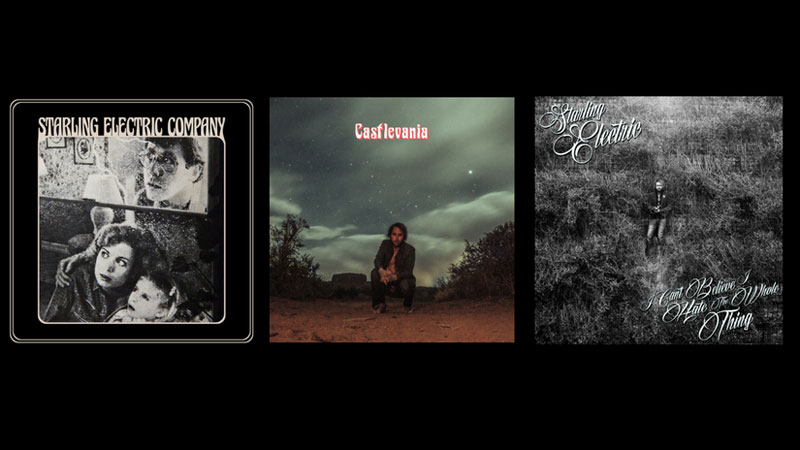 This is that instance where if you already know (of) Starling Electric, then you’ll be sure to share in the delight of seeing the release of two new albums on their bandcamp last month; either that or this could be the first you’ve heard of em and you’re wondering what the big deal is but, hey, you’ll give it a try. If it’s the latter rather than the former, then boy did you pick two unique batches to break into…

Okay, so let’s set the scene: Starling Electric is led by singer/songwriter Caleb Dillon and he released a doozy of an album eight years ago called Clouded Staircase. Jangled haze and wispy croons, baroque waltzes and psychedelic-country twang, it felt like a concept album that was still as unconstrained as a kite in a wind-storm. It was sweet, and sweeping, and it was redolent of 60’s rock and 70’s AM pop. It sounded like a timeless record you discovered in a vintage store bin, some secret sublimity smacking of British Invasion and garage-pop. But it was still more than all of that…

So Staircase came out and it soundtracked my autumn walks for a whole season in 2008. This was long enough in the past to find me using an actual Walkman to be listening to it… I, and all the rest of you, had to wait eight years for the follow-up: The Electric Company. Dillon has since moved out of Ann Arbor and over to Grand Rapids, but he still utilizes the entirety of Minihorse as his guitar/bass/drums backing section, along with Aaron Diehl on guitar. Starling Electric played a few shows over the last year, and it was just good to have another album to listen to… The songs were fuller, fierier, and the vocals seemed coated with augmented emotions. There was a lot of distorted fog and grit to the guitar riffs, but above all there were those understatedly majestic melodies…

But Electric Company had been a six-year work-in-progress for Dillon. It turns out, as he said to Current earlier in the week, that it just takes the proper amount of time before these songs feel ready.

Boom: Two new Starling Electric releases in October! That brings the total amount of albums in this year up to three! Four albums in eight years; three albums in 2016. But while the nocturnal reveries of Castlevania and the gnarlier aerodynamic fuzz-outs of I Can’t Believe I Hate The Whole Thing came out in one burst, the songs you’ll be hearing have been simmering in the studio (and percolating around Dillon’s mind) for 15 years.

“I’ve been working on this stuff (since 2000),” Dillon said, “it’s just taken me this long to feel like I was okay with it being available to the world… Whether or not people are actually listening to the music, it feels good to have it out there.”

Both of these solo albums find Dillon performing at every instrument. The lyrics radiate with anxious poetry, restorative nostalgia, and a blurred boundary between the surreal and the downright sincere. Atmospheric guitars chug along for 3-minute driving pop/rock for certain installments, while others are more fleeting folk ruminations lasting barely a minute…

Dillon said he began recording Castlevania while he was living with a coworker in a tiny apartment. Suffice it to say, said-coworker’s bout of deep depression (and a “chronic stinky feet” disorder known as Bormodosis) shunted Dillon into the sanctuary of his bedroom for much of the time. “Maybe “Castlevania” was my code word for safety, or an imaginary kingdom that I built in that bedroom….anyway, it sounded right.”

Can’t Believe I Hate The Whole Thing “…is a collection of odds ‘n’ sods whose only unifying quality is a total lack of cohesion. It’s more of a direct successor to the solo albums I’d recorded between 1997-2000, before Staircase.”

While Hate The Whole Thing is purposefully wayward in its way, Castlevania’s got at least one consistency, according to Dillon. “Any time that I wrote a particularly spooky song, or wanted to get dark or hopeless or something, I’d file it away under Castlevania. Eventually I had a whole collection, and they seemed of a piece. Watch for the inevitable sequel albums, Double Dragon and Final Fantasy.”

Dillon apprised himself to have “written and recorded a lot of nonsense” these past 15 years, but once in a while a certain songs sticks to him. “In some cases I kept chipping away at it, in others I left it alone,” he said, “but eventually I had a collection of songs that felt like a decent overview of what I’d been doing – like a musical diary. If it jumps around a lot between styles, genres, recording quality…that’s just how my brain works. I listen to, and think about, and learn about a LOT of music and this is the result. You should hear some of the other rubbish I’ve got stashed away!”

At the end of the day, Dillon’s in this sort of zen-place about the progression of Starling Electric: “I’ve already achieved what I wanted, which is to write and record songs that I like; if people end up listening to them and enjoying them, that’s a huge bonus – but it’s not essential.”

“If you don’t NEED to create something every day, you probably shouldn’t…” Dillon concluded. “I’m always writing and recording…if it were easier to play live, or if people would actually come out to listen to music, or if I wasn’t such a horrible musician and could do it myself, maybe things would be different. Actually, stay tuned about that live thing…”

I can tell you that you will see Starling Electric announce another live show soon. I just can’t tell you where, when or with whom, yet… But be patient! You waited eight years for a Staircase follow-up; you can be patient!

Listen all three of the new SE releases at: https://starlingelectric.bandcamp.com