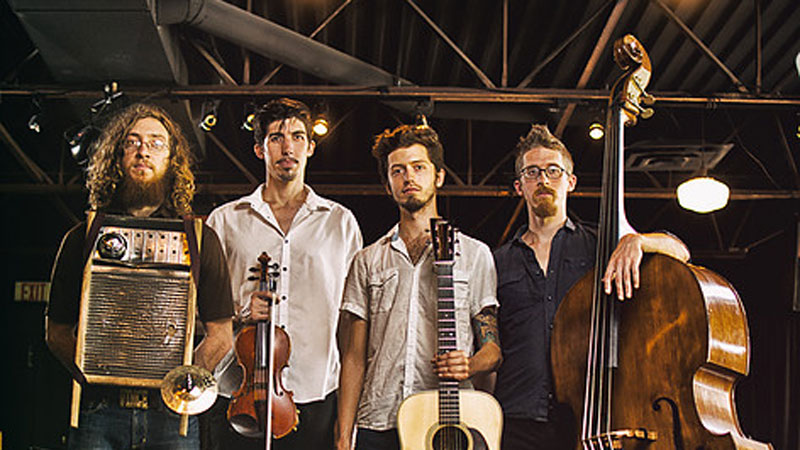 Brandon’s playing the piano, working on something, when I call him up at his home in Saline. It’s a rare window of time when Ann Arbor’s Appleseed Collective are actually in their homes: Andrew Brown (guitar/vocals) is in Ann Arbor, along with Vince Russo (washboard percussion/vocals), while Eric O’Daly (upright bass/vocals) is in Lansing. Brandon Worder-Smith is the violinist and mandolinist of the group, he also contributes vocals.

And, tapping a few warm major keys on the piano between questions, Worder-Smith confesses that even after his stint of classical training with a U-M professor and having been a violinist for 20 of his 30 years, the songwriting part of the musician’s life never gets easier. Going into the studio? Being able to take a break from the road and just work out a song with his mates in a room? Farming for the finest and most fitting tone? That’s the fun part…

For Appleseed Collective, the fun part has also, always, been in live performances.

New Recordings in the works

Worder-Smith, Brown, Russo and O’Daly will perform at The Ark this Saturday, with singer/songwriter Mike Vial. They will be fresh out of the studio, having laid down tracks (with Dave Schall) for their third full length album. The video that you can stream (above) is part of a recent Live EP that they put out, called “Tour Tapes.” It feels as though the band has been on tour nonstop for the last two years. They’ve been itching to find the time to dig deep into the meticulous crafting process of an album.

“It’s been a full three years since we’ve actually been recording together in a studio,” Worder-Smith said. “For a bunch of reasons… We eventually decided to just go really hard on the road. That was great, after all, because, honestly, in terms of tightening everything up, it was just getting better and better, and tighter; we’ve really upped the live show.”

“We just have to balance everything in our lives,” Worder-Smith said. “Finding enough time to be creative with enough time to: not start to death.”

And that’s just the way of it when it comes to making one’s way as a professional musician: touring becomes your life, for all intents and purposes. The Appleseed Collective is practically Olympians when it comes to the execution of musical muscles upon the field of performance, steadily building fan bases around the country at stops in every state. It’s hard not to be charmed when there are so many flavors in the genre gumbo; not to mention the way their knack for theatricality and overall affability quickly congeals rapport with an audience.

How to define it…

“We have so many influences, respectively, just the four of us, but you also have three different songwriters bringing their own influences,” Worder-Smith said. “Andrew’s tendency, in the past, was to write more of the old-timey feeling string-band feeling songs, while, for whatever reason, my stuff just comes out more poppy, almost rock-sounding; it still translates to our acoustic instruments quite well. Then Eric adds a whole side to it. I think he tends to write all of the songs that will get people to the verge of tears, it might be one of his songwriting superpowers.”

Worder-Smith has always been drawn to the road. He hitchhiked around the country seven years ago to find the perfect music collaborator to create new songs with, only to wind up finding his answer in Brown, back here at home in Ann Arbor. Brown had just gotten back from New Orleans, spellbound by Dixieland jazz, with a washboard in hand that he soon gifted to his longtime friend, Russo. O’Daly would join soon after, and they put out their first album in 2012.

So let’s get down to it: We can’t quite call this folk. We know we can call it “acoustic.” We know we can call it melodic; we know the harmonies are crucial. But we can’t call it country, nor could we call it purely Dixieland or Swing… I realized this when I asked Worder-Smith if he was anxious that the band would ever risk being pigeonholed as folk or old-timey-sounding.

“Actually, I almost wish we could be pigeonholed,” Worder-Smith says with a strike of the piano keys, chuckling to himself. “One thing we hear most is: ‘How do you describe what you’re doing?’ It’s hard to encompass the entirety of our show. It would be easier, for marketing purposes, if we filed it down to just two or three sounds that we had. We just can’t do that…”

Appleseed Collective love to bring the variety of experiences to the audience: the storytelling of folk, the flamboyance of pianobar blues, the puckish charm of swing and stringband jams, the poignancy of folk, the swagger of country, the fieriness of rock. Whatever you call that goulash, they mix it up pretty tastily.

They tag themselves online and over social media as “progressive string/swing.” But does that capture it?

“Does that make someone understand that we might cover a Weezer song, but we also play Django Reinhardt? That we could do Dixieland tunes, or acapella harmonies to sing Celtic mouth music, and also a country waltz? We don’t want to give any of it up, because we feel it’s all worth sharing. But, man…, how do we define this? It’s one of our struggles. Learning how to effectively market the music while not wanting to give up any aspect of it, because our audiences love it all.”

That it is all worth sharing…

Worder-Smith went into great detail about his nuanced romance with the road. It’s a good thing he’s already in a band that’s constantly touring, because, from what he’s told me, given his life experience and proclivities heretofore, he’d probably otherwise be a certified nomad. There’s just something about constantly being on the move that resonates with Worder-Smith. It ties into how the band is consistently devoted to meeting their audiences, coming to their towns, and, essentially, just putting on the best damn show they can physically produce.

Their MO, above all else, has been to gladden and gratify music lovers. They’re ardent music lovers themselves. Maybe they love too many types of music. But when Worder-Smith talks about one of his heroes, the “Vagabond Mathemetician” Paul Erdős, and how he opted to focus intently on his research rather than worry about where he would live, he gives the praise of “devoting his entire life to his passion without basically ever taking anything for himself…” And THAT sums up the drive of Appleseed Collective. They’re lives can be pretty intense and adventurous; but they’re not here to take anything for themselves; it’s to give, to create, to share…

So that’s where we leave it… The band is excited to play some songs this weekend at the Ark, a handful of which have never been heard before. Mike Vial, who recently released an album titled A World That’s Bigger, will open up the show, even as he recovers from a recent serious auto accident (he was on foot). Listen to Mike’s new songs at: https://mikevial.bandcamp.com/ And hear more of Appleseed Collective’s latest live EP here: https://theappleseedcollective.bandcamp.com/