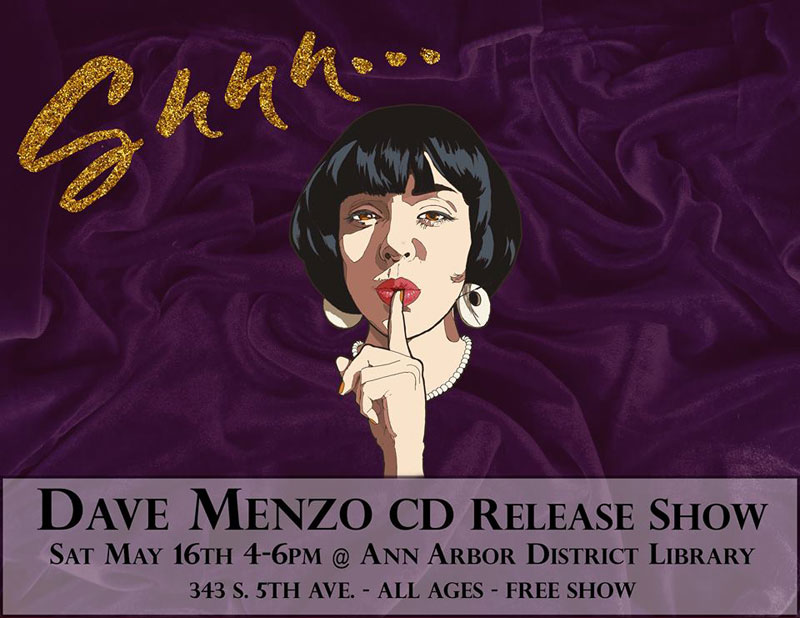 The Library: A trusty temple of tomes, encyclopedias and card catalogs, with worn copies of Alice In Wonderland and bent-up Catcher In The Rye’s, old ladies with perms wearing cat-eye glasses shushing you incessantly.

Wrong century. You see, as we’ve been submitting our every reliance to the almighty Google, the Library has quietly evolved into a digital access point for the unconnected, a community center and proponent of the local arts, a meeting space, and, lately, especially in the case of the Ann Arbor District Library, a great resource center for musicians. And just as libraries have evolved, so have the valiant DIY musicians in their approach to production, presentation, and distribution of their songs.

Multi-instrumentalist/songwriter and producer Dave Menzo walked into Ann Arbor’s library sometime last year and walked out fully inspired for the creation of his latest album, Shhh… Every instrument heard on the album, Menzo checked-out from the library, which means his library card could actually warrant a production credit in the liner notes.

AADL’s Music Tools collection offers library members a chance to check out instruments and music gear such as Moog theremins, mini keyboards, and digital bass stations—an array of equipment optimal for the at-home producer/songwriter to create their own minor masterpieces.

“The experience of discovering Music Tools inspired Shhh…,” Menzo said. “It is truly remarkable that the AADL has this program as a community resource for aspiring and veteran musicians. Especially with music and art programs being cut throughout the country, it’s amazing that libraries are stepping up to do what they can to still provide these opportunities for growing minds.”

Menzo, who experiences chromesthesia, a type of synesthesia causing sounds to evoke a sensory splay of colors, is a particularly keen producer, inclined to imbue the music he creates with a comparable aural/visual reverie to wrap around his listeners.

When Menzo was seven, he discovered an old Beatles cassette. He could hear the passion in their voices, the harmonies, the proto-psychedeilc whimsicality in their guitar tones and early experimental instrumentation. “It sparked a wild, musical dream in my head,” Menzo said. “I felt inspired on this deep, instinctual level.’That's what I want to do’ I thought. ‘I want to change the world with my music!’ I've been on that mission ever since, learning new instruments, trying to ideas and styles.”

Shhh… segues from Menzo’s earlier record, Color Wheel, into an enticing blend of electro-pop, world-music, and some seriously dreamy psychedelia. And he does it all with the imposing challenge to create music with instruments (with due dates) outside of his own studio.

Menzo admitted that Shhh… is definitely more electronic than his past works, but that a stylistic shift from project to project has always been his goal, ultimately crossing up different genres to create a song that demonstrates his evolving musical vision. He’s come a long way from his early days, recording his first solo album in 2001 before he could legally drive. Shhh… attempts to bridge the gap between a modern dance / electronic sound to a more traditional, classically driven compositions that shape Western music.

“There is still a very beat heavy, rhythmic feel to the album that is in most of my music, which comes from my love for world music, especially that of tribal and aboriginal origins. The beats and bass drive hard like something you might hear in a club, and the vocals soar like spirits resonating in a sacred ancient temple.”

Menzo set two key creative limitations: to only use AADL’s Music Tools, and not to use any guitar. He started each recording session by going to the library to find a new item to experiment with, return home, start up the drum machine and churn out a dozen different beats through looping, programming and laying down live parts. He’d narrow down his arrangements and start singing over them until his mind could form the ideal vision for the song.

Menzo admits that it was fun simply to explore musical possibilities with new instruments and gear. “But, it was still very important to me to create a quality album that could stand on its own, and that made sense in my body of work. I didn't want it to just sound like someone was just messing around. I wanted it to still sound real.”

His recording schedule would be dictated by the AADL’s own circulation limits—one item per checkout, loaned for one week at a time. The AADL was notably supportive of Menzo, letting him use items a little longer to finish the album, especially if it meant the promotion of the progressive Music Tools collection.

“I think it's amazing that libraries are evolving to become more than what many of us have known them to be. They are offering more than just books, and new programs that engage our communities in ways that are really exciting. The AADL for example, not only has music tools, but art prints, art tools, games, science tools, telescopes, zoom lenses, and much much more.”

Menzo said he owed a huge thanks to the AADL staff and everyone who supported the project, especially his Kickstarter backers. “Without them, this album would just be an idea.”

Menzo will be touring to support this album in the summer.

Shhh… Release Date: May 16th; it will be digitally available online and on CD.