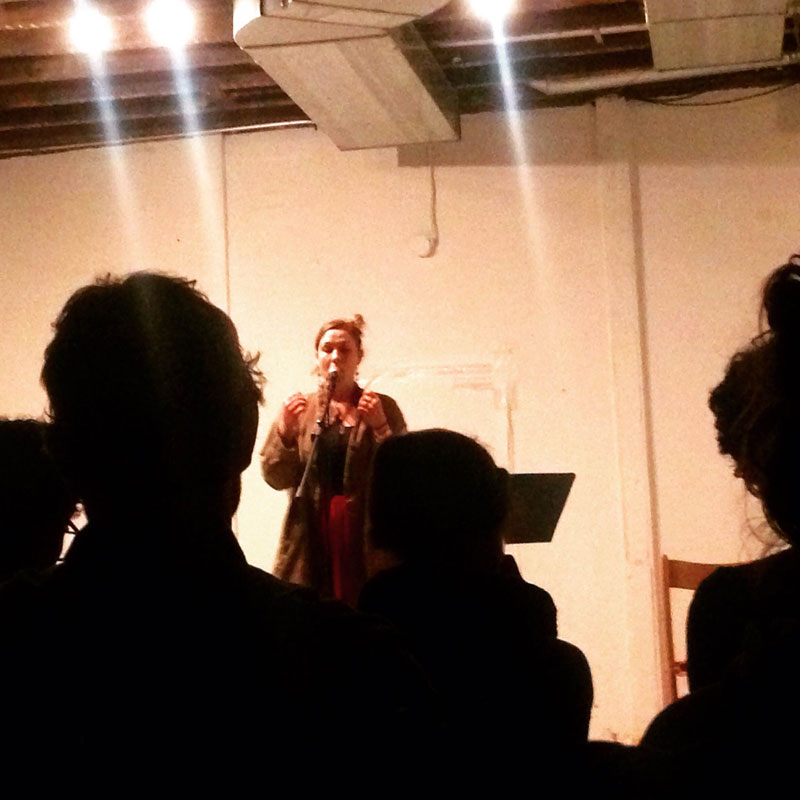 Inside an unassuming warehouse on the outskirts of Midtown Detroit, a group of young improvisational musicians gathered to do what they love: dialogue with sound. The previous four Wet/Dry Mix events have employed different themes with diverse instrumental/electronic arrangements; all showcase a pair of musicians work together to craft unique improvisational moments. In this iteration, one of the pair is a vocalist and the other sits nearby, at the end of a bundle of wires, manipulating their partner’s sound with the various knobs and faders of electronic equipment.

Matthew Daher, curator of the event, finds duo-improvisation performances exciting because of the intimacy that blossoms between the performers. From his arsenal of talented local musicians, his pairing tactics varied.

The event featured two vocalists, one slam poet, and one spoken word performer, each with an electronic musician counterpart. In an effort which he thinks facilitates the most primitive states of improvisational intimacy, Daher ensured most partners didn’t know each other previously.

“In these pairings the instrumentalist [vocalist] surrenders control of the form of the sound they create, while the electronic musicians surrender control of the content they manipulate,” Daher said. “This brings the performers into particularly intimate and entangled circumstances, and the audience gets to witness them finding their footing and finding ways to support one another.”

Alex Koi is a Jazz Studies student at U of M, with a Voice Concentration. She performed third, and her confident vocals provided ample fodder for her partner. The two conjured sounds that flowed from guttural growls—like a feeding scene in the jungle—to high choruses of electric angels. Her hands moved with the sounds, and her eyes were fixated in total focus.

“I think in general when I approach improvisatory music, it’s very much an art form that cannot be separated from your life,” Koi said. “Not only is it an extension of yourself, but your mood and your current state of mind and your thoughts from the day, or the week, or even the year.”

Koi explained an integral improv practice in her youth, alone in her room, where she was uninhibited to make noises and sing as loud as she wanted. She’s eager to return to that freedom as often as possible.

“Being in an environment where you can be silly and say whatever you want and not be judged really were my formative years,” Koi said.

Koi has found that serious venues for this type of performance art, unless collegiate or professional, are few and far between in the Ann Arbor area, and she described her current struggle as being too aware of her audience.

“College parties are such a frustrating thing because I always find that I’m wearing out my voice, and I’m playing to a bunch of drunk people who aren’t really listening to what I’m doing,” Koi said. “It feels more secure where people are there to see and respect the art.”

College parties can serve as an incubation period for young musicians, where they can practice their performance abilities in a casual setting. Events held by Detroit Contemporary is the next step for the more serious performers, like Koi. She said she found what she was searching for with Wet/Dry V, because the silent, listening audience hung on her every sound.

To find out more about the program, and events like this, visit SpreadArt.org.