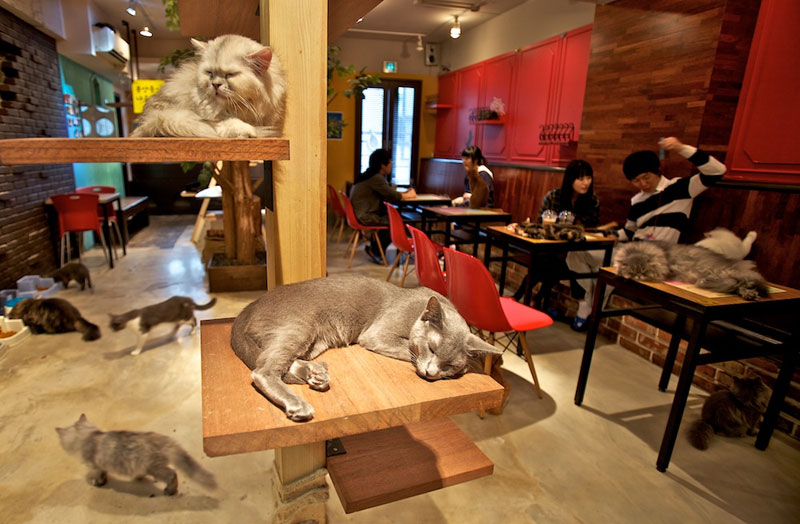 Cat cafes have been popping up around Asia since 1998, but they didn’t arrive in the U.S. until last year when Cat Town Café set the precedent in Oakland, California. Cat lovers in Denver, San Diego, Portland (Ore.), and NYC quickly followed suit, and now Ann Arbor is poised to join the list. Miranda Bono, who grew up in Fenton, MI and studied business at U-M Flint, plans to open The Cat’s Meow in the spring of 2016. But there’s a lot to do between now and then.

The American cat cafe model differs from the Asian model, which offers purrs and companionship at an hourly rate for people who live in small apartments that don’t allow pets.  The American model incorporates an adoption element—meaning the cats at cat cafes are not only nice to be around and play with, they could be yours.

Bono hopes to secure a space downtown and as close to U-M as possible. She’s in the process of establishing a group of investors for the project, and a crowdfunding campaign with a goal of $30,000 is also in the works.

Due to Michigan health code laws, the cat cafe will be split into two rooms. One room will house between 10 and 15 free roaming cats for visitors to cuddle, coddle, and play with—of course, there will be a variety of cat toys provided. The other room will be the cafe. Visitors are free to move from one room to the other, but will pay a small entry fee for the cat area.

Bono is ready to start communications with potential coffee shop/vendor partners and rescue centers whose efforts she can support.

The coffee shop partner “would be promoted in the cafe as Coffee by _____.” Bono said. “The rescue center I would partner with would handle the adoption process and veterinary services for the cats. We would be getting the cats out of cages at shelters, and freeing up space for new rescues to be brought in. I would also love to find sponsors for the cat food and kitty litter.”

Don’t worry, Bono plans to provide the cats with a private room for conducting, shall we say, their personal business.