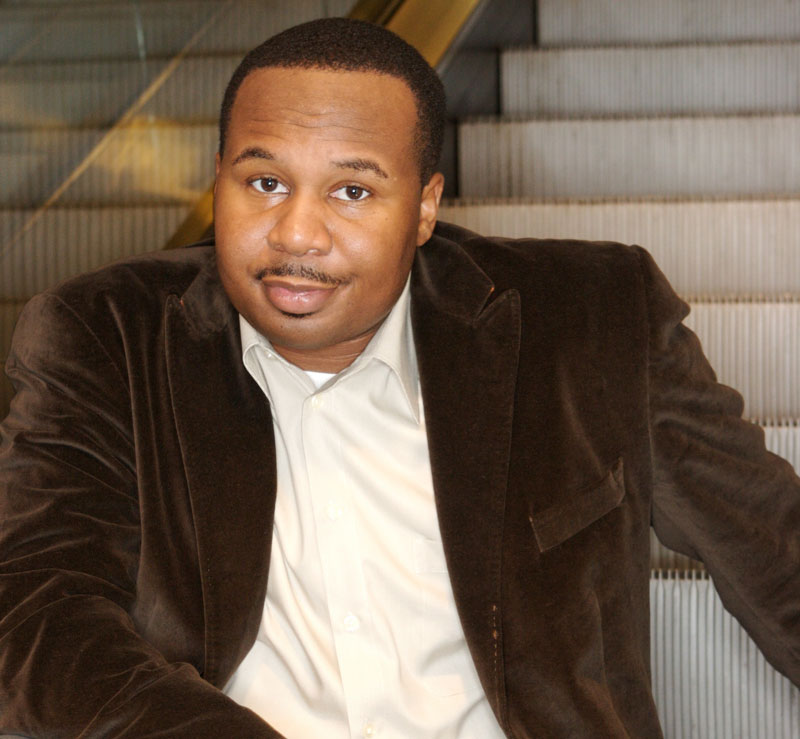 I had the pleasure of speaking with Roy Wood Jr. in anticipation of his shows at the Ann Arbor Comedy Showcase this weekend. Wood, lauded by Entertainment Weekly for his “charismatic crankiness” has been in comedy for over a decade and has honed his craft on the radio, on TV, and on the stage. We chatted about his career, the job roles of a comedian, Japanese prank videos, Bill Cosby jokes, and the weather.

I grew up listening to The Jerky Boys. And then Crank Yankers came along. And then I got into watching Japanese pranks videos, which I still watch if I’m having a bad day. I was excited to see that you had a background in pranks, too. How did you get into it?

When I graduated from college in 2001 from Florida A&M, I went home and got a job at the local radio station as an intern. I wanted to be the comedic sidekick on the morning show. And so I’d do prank phone calls—it was a position to be filled. It wasn’t something I wanted to do when I started out, but in order to move up at the radio station it was something I had to do. And low and behold, I ended up being good at it. But I never started out with that goal. You know, I did prank calls when I was a kid. I would send cabs to my next-door neighbor’s house and stuff like that, but deep down I can’t say that I always knew since I was four that prank calling was in my blood.

Must be harder to pull off a good prank call these days.

It is very hard. In the past, 10, 15 years ago, you’d try maybe four calls and one of those calls would be a keeper. Now you have to double that. People are more skeptical.

You laughed a little when I mentioned Japanese prank videos.

Yea, I’ve seen a lot of that stuff from overseas. It’s funny just how drastically different our tastes are when it comes to humor. There used to be a thing that came on the Spike Network—MXC, Most Extreme Challenge. The people would go through these obstacle courses and people would be punching each other and crashing through walls. That stuff still makes me laugh to this day.

I love that slapstick. I mean the Japanese pull stuff off that you just couldn’t possibly get away with here—you’d get sued for most of it.

Oh yea, and it’s weird because historically it’s a totally upright, prim and proper culture. I mean, at one point in their history, you’d kill yourself if you embarrassed your family. Going from that to this type of silliness is just awesome.

Did you see the Tina Fey, Amy Poehler, Bill Cosby joke on the Golden Globes the other night?

Yea, it’s fine. Our job as comedians, to some degree, is to report and comment on those types of issues. It would have been worse if they didn’t do any Bill Cosby material. Ignoring it just isn’t being true to the job requirements.

So what I’m hearing you say is that comedy should attend to moral and ethical and political issues even if the issues are uncomfortable.

Somebody has to challenge the status quo, someone has to remind you to take a different look at reality, or present reality through a different prism. Hopefully it keeps people on their toes about making sure that there’s not so much shadiness going on.

Is it good to have a schtick in stand-up? Have you established a particular stage-style or voice over the years?

It’s good at some point to figure that out, because that’s something that can distinguish you from the other comedians out there. Early on, I didn’t really have a schtick; I was just happy to be on stage. I’ve been doing this for 15 years now, and once I hit year 10 I finally started figuring out who I was as a man, just as a person, and taking that persona and putting it on stage.

To some degree. When I get on stage, all you’re seeing is an over-caffeinated version of me offstage. I do get annoyed by silly stuff and weird things that don’t matter.

So you go back over your shows, record them and take notes on crowd response to know where to punch things up or dial it back.

For me, that’s a staple. I’ll video record shows sometimes to see how my body language relates to certain parts of the joke. Of course I listen to material. In the early days of the joke, I scrutinize every sentence to trim the fat. Bit comedy is an economy of words, so I’m listening for words that I can eliminate. From that technical side, we as performers are no different than football and basketball players who go to tape to evaluate their game.

Nice. Well, thanks for taking some time to chat, Roy. We’re looking forward to your show in Ann Arbor. Bring a puffy coat.

You know what, man, I don’t mind winter. Growing up in southern heat, I figure to some degree you can prepare for the cold, but with the right layers on, you’re okay. But 100 degrees is 100 degrees—you’re screwed naked. There’s nothing you can do to change 100 degrees. At least with 20 degrees you got a fighting chance. So, I’ll get up there and give it my best shot.