Five Questions for the Brewmaster 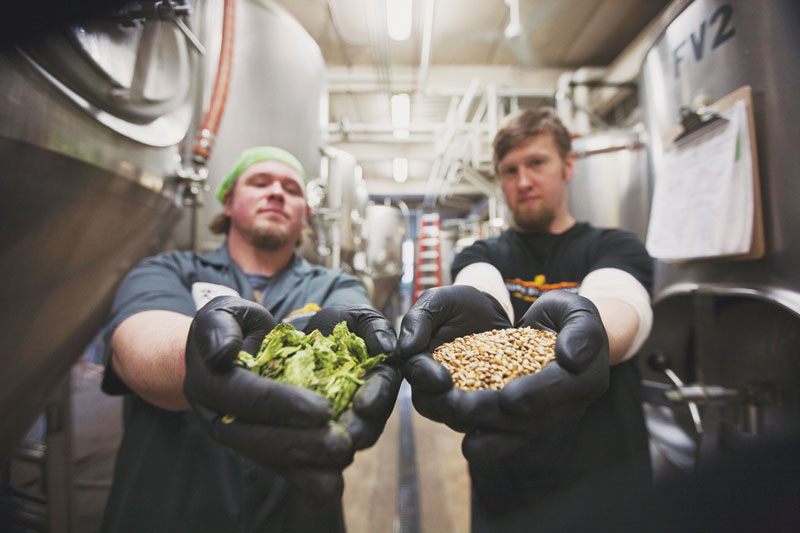 In 2007, while serving at Knight’s Steakhouse, Oliver Roberts met Trevor Thrall, co-founder of Wolverine State Brewing Company (WSBC). The meeting was momentous for both parties. For Thrall, it marked the first time publicly tasting his own beer. For Roberts, who also worked as a brewer at Grizzly Peak Brewing at the time, the exchange set the course that would lead him to his current position as Brewmaster at WSBC. Now, 8 years on, Roberts, Thrall, and Matt Roy (co-founder) are still brewing top-shelf lagers that contribute to the growing conversation that has put Michigan on the national and international beer map.

What was the beer that changed the way you think about beer?

The beer that changed me was my first batch of homebrew when I was 19. The simple process of a beer kit and then mixed in with waking up to see my first ever fermentation in the hall closet…I was hooked. Can’t say the beer was anything special but I never wanted to stop brewing!

These days, when people talk about great beer they talk about Michigan. Is there a sense of pride in being a Michigan brewer?

Beyond most brewers being proud and very thankful for the ability to make beer as a career, I believe that Michiganders are proud to be from Michigan. We have such a healthy collection of hard-working, intelligent, and innovative people in this state, keeping the enthusiasm about living here high.

You brew lager-style beers exclusively. Is lager where American craft beer is going next?

As homebrewers have access to more and more information about how make beer, more and more microbreweries are opening with lagers, or experienced breweries are adding lagers to their lineup. The growth of knowledge about beer as a whole has increased the understanding of why lagers are a serious style of beer to brew. A well-crafted lager can stand up to any other style—how lagers are appreciated is what’s changing.

What is your most popular beer, and what beer do you wish people ordered more of?

Our most popular beer is our Gulo Gulo I.P.L. 6.7% abv, 65 IBUs, double dry-hopped. It’s got it all. Attention to detail, balance, and full of American hops. Honestly, I am satisfied with the way our beer sells. Craft beer drinkers love to try what’s new, what’s exciting, and it challenges us to keep innovating and trying new things.

What’s in your fridge at home?

I always have a 6-pack of Gulo and Wolverine Premium Lager at home. I’m a little light on other Michigan beers right now, but I have a 750 mL of Shlafly Quad, Sam Adam’s Stony Brook Red, Firestone Walker Union Jack, a bottle of WSBC 2013 Massacre Imperial Dark Lager aged in Bourbon Barrels, and usually a howler of a WSBC specialty. I feel guilty not having any other Michigan beers, but my brother lives in St. Louis and sends me care packages of beers we can’t get here.