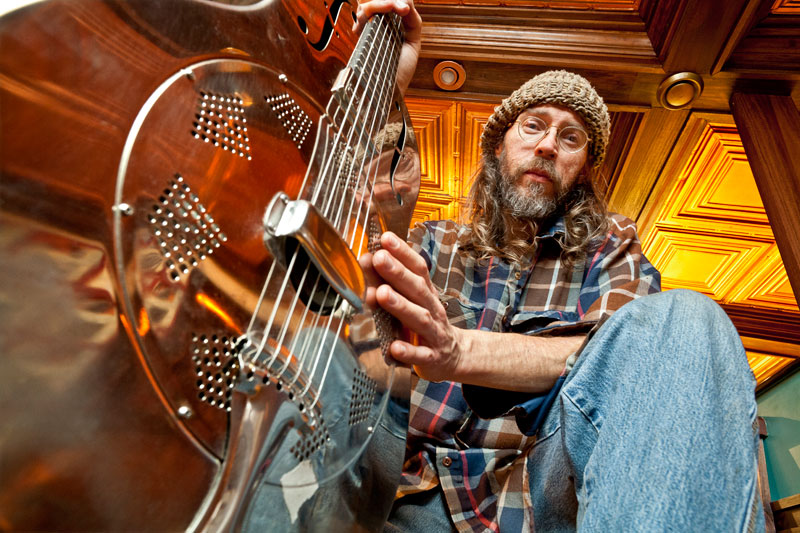 As usual, Charlie Parr, Minnesota folk legend, is on the road. And if he’s not driving his car, he’s probably playing his guitar. The man is a fiend. “Playing the guitar is your reward for driving all day,” he tells me. I caught Parr in Nebraska on his way to a show in Kansas City. We talked setlists, Springsteen, furniture stores, and growing up in SPAM town USA: Austin, Minnesota.

Do you write setlists or do you just wing it?

I stopped writing setlists a long time ago. I used to write something down, but when I’d go to play the next song I’d immediately start thinking well that’s not the song I want to play next. The song I want to play next is usually something that comes into my mind while I’m playing the first song. So now, for my set list, I come up with the first song to play, and then everything else suggests itself. And sometimes people yell out songs that they want to hear, so I’ll play those.

(Laughs) Man, that’s a good record, one of his best records. The whole vibe of the record is just really, really good.

So good. And it’s so narrative-based. You talk about Carver and O'Connor and how short stories influence your song-writing. I’m sure you come across some odd-ball characters and some strange places while you’re on the road. Do you ever write short fiction?

Yeah, I have. Nothing good. What I end up doing, I try to recognize how bad they are, and I end up distilling a song out of them, throwing the rest of the story away.

It’s a similar form to songwriting though.

Yeah, you have to make something clear, fast. And yet, you can’t be too obvious about it.

Back to great records. What are your kids listening to?

Oh geez, it kind of runs the gambit because I have my dad’s record collection. Mississippi John Hurt, Roscoe Holcomb, Booker White are all characters in my house when I’m home. But we’ll also listen to a lot of drone music like Pelt. And guitar players like Robbie Basho and John Fahey. And I listen to Captain Beefheart, probably more than I should.

Well they hear other music from their mom that’s more modern, but I don’t know the names of any of the people who make that music. It’s going to be interesting to see where they end up.

How old are they?

I was 11 when I bought my first CD—the Dangerous Minds soundtrack.

(Laughs) I was a hair earlier. My dad would constantly play records in the house. I remember being obsessed with some song he’d play. I’d be out doing something in the world and suddenly feel the need to bike home and play it.

Now you get that fix anywhere, anytime.

Oh yeah, it’s amazing. I don’t know why people complain about technology. I grew up with access to all these great records, but now it’s insanely easy for everyone to hear music.

So what do you remember about growing up in Austin [Minnesota]?

I loved growing up in Austin. It’s not a big town. It’s all hunkered about Hormel and the meat-packing industry. I was kind of that bike-riding, firecracker kid. It was great. We rode our bikes all over town. I suppose there wasn’t a lot of trauma then. I mean we were kids, in my mind now it seems idyllic. I just remember long summers of bombing around on my bicycle.

It’s probably not the reality of it. Both my folks worked a lot, they both worked at the packing house, like six days a week. I would come home from school, get myself a snack and head outside on my bike—not see my parents until supper time every night. I mean the whole neighborhood were latchkey children. We were the kids who had fires and blew up dead birds with M-80s—not that I condone that kind of behavior… I remember a little crick that goes through town. We knew certain parts of the crick where we could build up a ramp and jump over the thing like Evel Knievel. We did that every single day.

Your music has been called roots and Americana. Do these labels mean anything to you?

Not really, I mean, I guess it does. The music I really like to listen to comes from a time before those genres were created. Radio stations and record labels and furniture stores made those genres up…

Wait, what do you mean furniture stores?

Well in the early 20s, if you had a record player, it was made by a furniture company—it was really more of a piece of furniture. And the company that made your record player also made the spindle which would be a unique size to fit certain records. So if you wanted a record for the record player you bought, you’d go back to the furniture store you bought the player from. That didn’t last for a long time because companies like Victrola started standardizing the industry. But before that, the furniture stores would categorize the records by race—Black records and White records.

What category is your music in?

I don’t really think too much about it. I think of my music as acoustic music, but the new record has electric instruments on it, so I can’t think that way anymore. It’s hard. I get categorized into areas I don’t really feel I belong into. I don’t play blues, really. And I definitely don’t play bluegrass, but I’ve been put in that category. I guess I identify most with folk singers.

Perfect fit for The Ark then.

What a great place. I was just talking about The Ark at Freight and Salvage, which is like a cousin of The Ark out in Berkeley. We’re lucky to have some of these places that have not gone away, still being true to the mission. These are the places that I get the intangibles from. On this trip I played in a boxcar in Weed, California, which my booking agent might say is not exactly a startling career move, but the intangible quality of it means a lot to me.