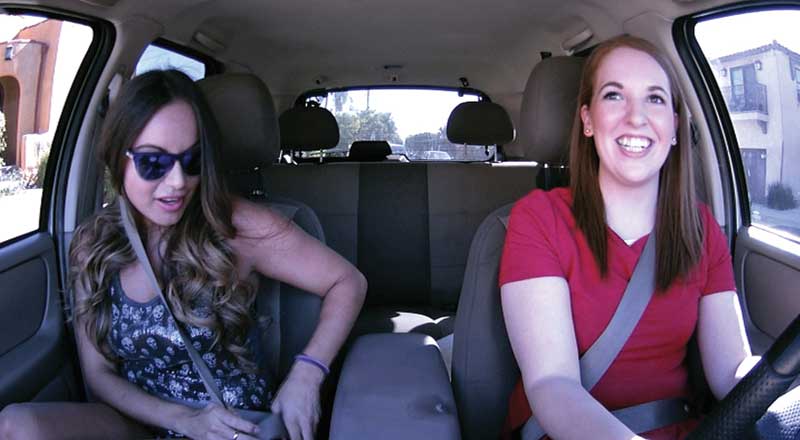 It’s November 1, 2012. Kellyann Wargo, University of Michigan senior, settles into a camping chair. A bust-open jack-o-lantern trashbag stuffed with leaves sits beside a folding chair upon which stands the fixings for mimosas and a martini glass. A girl wearing a sexy hotdog dress walks by holding a clutch, looking ashamed.

Kellyann Wargo, now 24, has turned a hilarious hobby into a business and her business into a TV series. We had a chance to talk with her about her new life and her new show, which airs this month on VH1.

What do you miss most about Ann Arbor?

It’s funny, what I really miss was one of the things I used to dislike most. I miss running into people I know when I leave my house. Even the people I used to avoid like the plague I would now love to cross paths with. *Cough* Ex’s *Cough*

You were an Art and Design major and Art History minor. Where did you get your sense of entrepreneurship?

U of M has a very open art curriculum that allows, and really rewards students, for taking studio courses outside their desired concentration. Plus I’ve grown up and surrounded myself with people who push each other to design and peruse new things. It’s creative problem solving. I saw a need, and used my skill set to fill it.

How did your service shift from a make-a-few-bucks local business plan to the premise of a major network TV show being filmed across the country?

When I started the shuttle Uber and Lyft didn’t exist. First I just had a poster. The YouTube video was intended for U of M students. It’s great that people around the world saw it, but that wasn’t the goal. Some of those people happened to be in LA and thought it would make a funny show, to share the stories of the people I pick up.

People might watch the show with the assumption that the guys are cocky, and the girls need extra consoling. Sure, that’s the case with some passengers, but definitely not everyone.

The title of the show, Walk of Shame Shuttle, suggests an expectation to see humiliation and guilt in the shuttle rider. Do you find the people you pick up feel humiliated or guilty?

As someone who treated the walk of shame like a 5K and lived in a house of at least 6 girls throughout college, I have above average experience with the morning-after walk. Some people are humiliated because they called their mom instead of their girlfriend, or fell mid-wobble, but no one gets out of the car feeling the same as when they got in.

There’s another expression for this “morning after” experience: stride of pride. In an interview you gave to Her Campus, the interviewer refers to this alternative expression, lauding the “feminists who fought for sexual freedom,” saying she prefers stride of pride over walk of shame. Do you feel the expression walk of shame undermines this idea of sexual freedom? Was there ever any discussion about naming the show Stride of Pride?

It’s tongue in cheek. Walk of Shame Shuttle was just the name my friends and I used and it stuck. Comedy is a way for women to take control of their freedom and discuss tabooed subjects like one night stands in an approachable tone. The fact that I, as a woman, have taken something that is perceived as embarrassing and shameful, and turned it into a successful, funny, television show is pretty damn feminist to me. When you watch the show there is no sense of undermining sexual freedom—for men or women. Regardless of what you name it, walking in heels or dress shoes in last night’s outfit at 7am sucks. You just want to get in your own bed, chug a Gatorade, and put on some pajamas—the fastest way to get there is the Walk of Shame Shuttle.