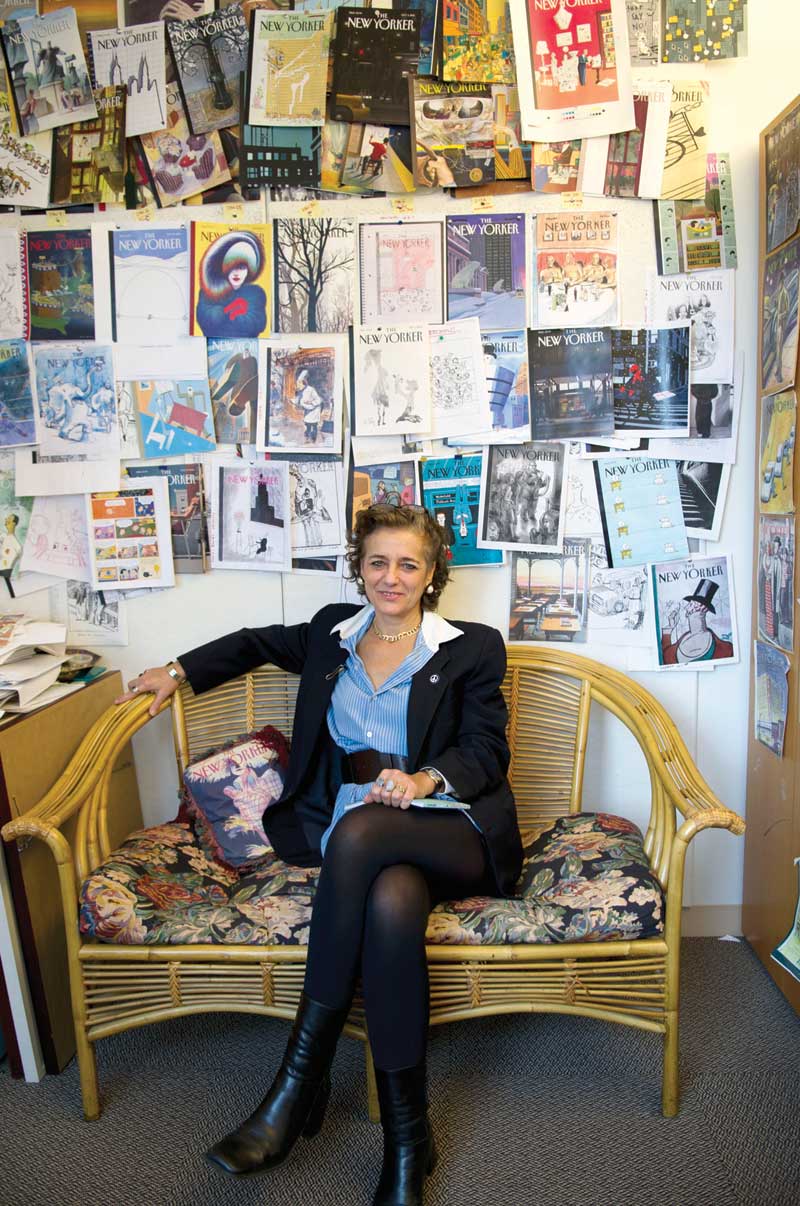 Francoise Mouly has been the art editor of The New Yorker since 1993, responsible for over 1,000 covers including the 9/11 black-on-black cover and the controversial Obama fist-bump cover. She is also the editorial director of Toon Books, publisher of kids’ books by comic-strip artists. Mouly, featured in this month’s U-M Penny Stamps Distinguished Speaker Series, took some time to talk with us about The New Yorker, narrative art, and her latest Toon Books release: Hansel and Gretel, retold by author Neil Gaiman and illustrator Lorenzo Mattotti.

How does humor play into selecting a New Yorker cover?

It’s essential. The New Yorker was started as a humor magazine in 1925, and even when they began adding more serious reporting, it kept the cartoons, it kept the Shouts and Murmurs, and it kept the poetry, fiction, and cover art. So it’s not a fashion magazine, not a news magazine, not a literary magazine. And I think that is what keeps it alive in the 21st century.

Yes, whether it’s Saul Steinberg or John Updike or up-and-coming fiction writers and poets, you can’t think of humor as something other than individual point of view—there’s no such thing as corporate humor, for example. That, itself, is a joke… What people come to The New Yorker for is the point of view of its contributors.

Whether it’s the art or the edit, the points of view tend to stay relevant, too. Old New Yorker issues are kept around sometimes years after the pub date.

Yes, it doesn’t become obsolete when next week’s issue comes out. And the art is a really important component there. It’s an image making a comment about something timely or timeless. The artists depict narratives about our lives and how we live that you can look at and get a detailed sense of the times, what makes people laugh, their attitudes and prejudices. They actually highlight the subtext of how we live. For example, there’s a series of covers that capture the changing attitudes about gay marriage. In 1993 we had a cover with two men standing on top of a wedding cake, which at the time was a shocking image. And we received a lot or kickback at the time, saying “how dare you put that topic on the cover of the magazine.” It provokes debate. And the topic evolves from shocking to acceptance.

You mentioned narrative art. Can you talk a little bit about the difference between how images and words are used convey stories?

Images have a power, whether they be comics or single images on the cover of The New Yorker, they have a power that runs parallel to what words can do. They have to be read and deciphered and there’s an interaction with the reader. For example, we ran a cover of a woman who was getting ready for her wedding and her belly shows she is in the late stage of pregnancy. I received a letter from a woman who said, “how dare you put this on the cover of my New Yorker. I have a young teenage girl and I would never want her to see this image.” And if I could have written back , I would have said, “Madame, if this is such an important issue for you, that your daughter remains a virgin until she’s married, why don’t you put the magazine on the coffee table and have a conversation about it.” It’s a point of departure. The cover is not telling you that you have to be pregnant to get married or that you should be pregnant before marriage. There is no didactic propaganda in the image, it’s a representation of something people have to contend with. It’s a starting point for discussion.

Beyond your role at The New Yorker, you also publish comics and children’s books. What are you currently working on?

We [Toon Graphics] have an illustrated book coming out on the fairy tale of Hansel and Gretel, written by Neil Gaiman and illustrated by Lorenzo Mattotti. For me it’s a rediscovery of the power of words and images put together. You know what’s going to happen in the story, but the way the words and images work together creates a new experience.

Hansel and Gretel, that’s a pretty dark and old story.

When I asked Neil if he’d be willing to write it, he said he’d been waiting all his life someone to ask him to write Hansel and Gretel, because when he was a kid he heard the story on the radio and he was chilled to his bones. It was the first time he realized that we humans are made of meat that could be eaten. He wrote us a really beautiful version, extremely vivid and all about hunger and the smells and tastes and physical senses of these children lost in the forest.