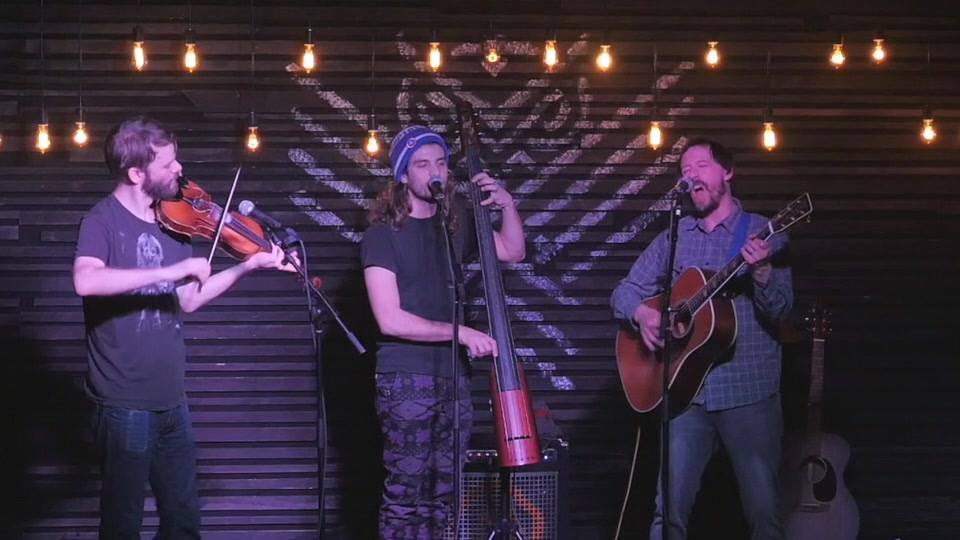 The rhythm is set to rapid. The vocals are spry. The stringed arrangements burst from the gate already at in a hurry. The listener, essentially, has to hit the ground running when Wire In The Wood begin a song like “Across The Broken Dam.”

And even that song title suggests urgency, as though this were music to make hasty travel to, precarious jumps, negotiating quickly downhill through wooded areas, following along the stick-strewn shore of the river. Wire In The Wood – a Michigan band that makes an authentically rootsy, bluegrass tincture so sheer and total that it transports you to an Appalachia vista if you close your eyes and daydream to it. But I wouldn’t recommend daydreaming to this music, because it’s so characterful and kinetic that it’d probably be hard to resist a bit of bobbing and weaving, or any kind of movement, to it.

Ann Arbor based Wire In The Wood are putting out their second full length album, Live Wire. They’ll be part of the Top of the Park program of live music performances during this year’s Ann Arbor Summer Festival.

There are elements of jazz and jam-band effusiveness to their music in a live setting. The acoustic guitar and violin often trade off expressive phrases and solos in a sleek and nimbly interwoven composition, with the bass consistently filling every corner and crevice with colorful, wavy grooves and warmly harmonized vocals adding a luminescence to the adventure, I’m thinking specifically of a song like “Anomalous Magnetic Moment.”

“Across the Broken Dam” is a strong lead single, but there rich intricacies in the performances on a song like “Ash and Ember,” where things can slow down a bit and catch up on some oxygen for a serene bridge where our bass gets to blossom. But it’s also a song where guitarist and vocalist Billy Kirst’s tender tenor gets to warble out a sweet melody. Until we transition into its second movement, and the violin starts doing some interesting double-stop (or triple-stop) styled saws on the strings. And even though I might keep suggesting an exuberance to their music, this song, and others, are where you can hear some heart-heavy, even darker material spilled out vulnerably on the lyrics sheet – but the timbre and ever coiling and soaring melodies seem to keep everything….not necessarily sprightly…but hopeful, or restorative.

And those storyteller, campfire ballad, yarn-spinning, murder-ballad traditions of bluegrass and folk continue on into the closer, “Money, Liquor, Women & Crime.” The rhythm becomes like a fluttery feather and the violin becomes comparatively somber in its glide, and it reinstates this group’s ability to inject new life into an elemental sounding music. But if you don’t wanna end on a haunting note, you can rest assured that a lively string-band style ballad is always aching to burst from this band – case in point, the shoulder-loosening, knee-bending, foot-stomping, string-blurring jaunt of “Hold!” Listen close to the fingerstyle as it frays across the frets – and you’ll feel like you’re just about to fall off and into that river I mentioned. But Wire In The Wood always keep you afloat.