Talking to Child Sleep About Their New Album, Secondary Forest 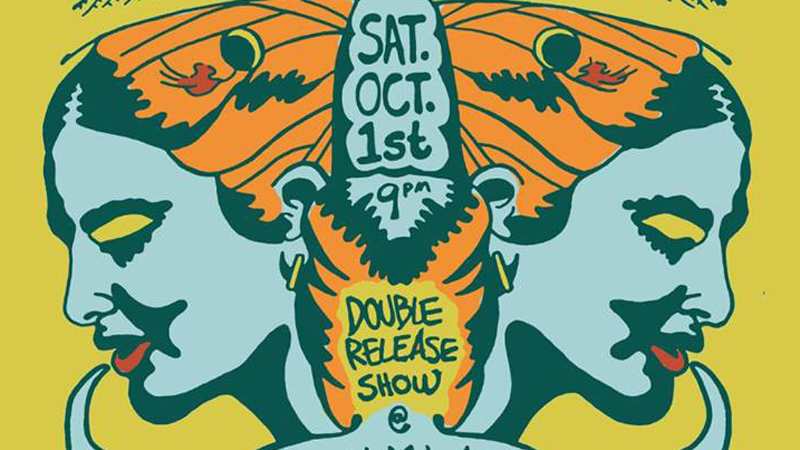 Catharsis was never so catchy. Child Sleep’s Mary Fraser uses the word “doom,” but her melodies are utterly delightful. The subject matter of certain lyrics can show some serious soul searching but then a certain hook, a tasteful drum-fill or a sung harmony ameliorates the emotions, healing comes from the splendid scuff and scrape of the fringed feedback.

Fraser is not just the lead singer and guitarist for Ypsi quartet Child Sleep, she’s also a music therapist. So she’s knows what she’s talking about when she tells you that “…(music can) give you the opportunity to get out the negative thoughts that can seem so extreme, and not 100% accurate, just so they don’t stay stuck inside and fester.”

Fraser had, up until her 2013 debut with Child Sleep’s Distortions, been collaborating with several other local outfits, namely Little Island Lake and Tanager. Last year, she joined Gregory McIntosh’s “super group” Loose Teeth on keys. While Little Island Lake has been inactive for more than a year, Tanager finds Fraser on drums, supporting the songwriting of Eleanor Daftuar.

Now, then…, Daftuar is the lead guitarist in Child Sleep, with bassist Scott Kendall and drummer Dave Menzo. The group releases its second album, Secondary Forest, on October 1st, and the lead single is “Self-Talk.”

We don’t have to rely on labels or genres. Even if Child Sleep will outright tell you on their Facebook that they’re unabashedly slinging some 90’s revival, it is an informal access point into what I feel is the groups primary resonance, that being a hard-charging softness, the sweet splintering… A succinct seizing, by-way-of-feathery-vocals and dulcet harmonies, of that trickily-intonated emotion from a tacit trauma one climbs up and away from that finds refurbishment in a four minute ballet of sonic bellicosity with a salving, sweet melody. It exorcises, but it doesn’t muddle; it’s real and a bit raw when it has to be…because it needs to be…, yet you’re charmed when you slide off the headphones. And minutes later… you’re humming that Self-Talk hooks again.

Mary Fraser: Distortions was a true gift, for a number of reasons: it brought me closer to (Daftuar) and others associated with the album, and it provided me with an outlet for some sadness I had been holding on to. Distortions has a dual meaning, first with the sonic distortions of fuzz guitars, and also the cognitive distortions associated with being in a dark period: when you’re really down on yourself and saying non-constructive things about yourself. It wasn’t necessarily fun, but it was necessary to sit inside that sadness. As far as Secondary Forest goes: I wanted to focus on some more positive messages, whether they were whimsical, or even playfully awkward. Some of the songs still harness a sadness, but in a less doom-y way. A secondary forest is a regrowth that happens after a disturbance like a wildfire or storm. I thought it appropriate since I had entered this new period of trying out experiences, even if I was making a fool of myself or stumbling along the way. Not just rediscovering who I am, but shaping myself to make changes about ideas or behaviors that hadn’t been helpful previously.

I think ‘Self-Talk’ speaks to that restoration. It’s like a readjusted perspective, in the lyrics, or a gaze of the bigger picture. How did writing, performing and collaborating on music help you crack out of the darker, doomier chrysalis?
Fraser: “Self-Talk” was kind of a beautiful surprise to me. Even while writing it, I hadn’t imagined it becoming the first single, but it magically fell into place. It was almost the perfect transition from the old album. Distortions had been all about getting stuck in those negative mindsets, and then the lyrics to “Self-Talk” had come marching in as an anthem to talk myself down and psych myself up to push forward and stay positive. Music is such a personal thing, and yet it is ubiquitous. It is at most celebrations, birthdays, sporting events, parties, funerals, schools. Everyone has their own personal relationship with music. As a music therapist, it continues to surprise me how you can adapt music to almost any situation to work towards any goal.

So what is it about the wicked fuzz, the somewhat ominous-tones-sutured-into-melodies that draws you…? If you think of your influences, are there comment elements, textures, moods, that you think they’ve shared, that’s continued to interest you, now, as a songwriter?

Fraser: I just love mixing opposites. There is something just so tasty about contrasts, whether it’s Renaissance counterpoint, or mixing the gnarly fuzz guitars with sweet, clean-vocal harmonies. It’s something I’ve always felt drawn to, like contrary motion of a bass line moving upward with a keyboard downward. I guess that also speaks to my influences growing up. Siamese Dream was one of the first CDs I ever purchased, and I just loved how hard the guitars hit. I mean, I’m not a man like Billy Corrigan, but I also like to experiment with those whispery vocal lines. I don’t think female falsetto is utilized nearly enough in music. And I’d say that one of my favorite groups would be The Go-Go’s, where those harmonies are just so infectious. I wouldn’t call myself a pop- lover per se, but I’m a sucker for catchy riffs. As I always say, if the part isn’t singable, then it’s probably not memorable.

But the lyrics, particularly on Distortions, are very revealing. How did you get comfortable allowing yourself to be vulnerable and to be a frontwoman ?

Fraser: I was definitely embarrassed when I first released Distortions, because it is a bit vulnerable. And I think anyone close to me would be able to piece together what some things were about. I don’t think that ever gets easier for an artist? I also have this writing block in my head that if you get too specific, it comes off as cheesy or dramatic. It can be hard riding that fine line, making it specific enough to elicit an emotional response from the listener, but also almost vague enough to be accessible. It was surprising to have people come up to me and say that they could relate to certain songs. Becoming a front woman has definitely been an experience, getting more outside that comfort zone.

Getting comfortable out of your comfort zone…, is probably helped by all the different styles you take on in groups like Wraiths or Loose Teeth.

Fraser: When I started playing in Little Island Lake, I really started to branch out more as a singer/songwriter and instrumentalist. I just feel lucky that I have found some musicians who believe in me and enjoy playing the music that I write. I still hate performing solo, haha. Too nerve wracking! Even though Child Sleep is my ‘brain child…,’ I still get a lot of joy out of collaboration. The creative process and variety is important to me, so I love that I can participate in other groups like Tanager, Wraiths, and Loose Teeth. Our engineer Rishi Daftuar had been great to work with, as he can sometimes envision things I couldn’t have. It’s easy to get stuck with having a fun bedroom demo, and then just work on polishing it, but I truly value the opinions of Eleanor and Rishi. They both have great aesthetic taste, insight, and it can be really helpful to give my music to another set (or two) of ears.

It seems that, whatever it is, you thrive on connecting… Be it by letting the heart be out on the sleeve, lyrically, or just by helping someone else’s song.

Fraser: I feel blessed that I have been able to meet some pretty amazing people and musicians. People that I have similar tastes with, and have a deep respect and admiration for. Eleanor adds a flavor to Child Sleep that I don’t think anyone else could. And just being around her and knowing her, I have come to learn her own artistic aesthetic. So it becomes a really enjoyable exploration to play drums and support her through her own songwriting in Tanager. I also joke that Loose Teeth is almost like a super group because all four of us to play in projects where we are the singer/songwriter. The LT songs are amazing and stand on their own, just see Greg play solo any opportunity you can–and likewise when we play as a full outfit, there is just a groove that meshes well.

Look back to the last time you had an album out, 2013, with Distortions, and now look forward to Secondary Forest a mere matter of days’ away…

Fraser: Distortions was almost like an experiment to see what’s possible with translating my bedroom demos, but Secondary Forest has been fun to explore perfecting that process. There are a handful of songs on the album that I’m particularly proud of in terms of song structure and sonic textures, I’m thinking of “Longing” and “Now.” I feel like every album needs to have a spooky song too, so I had a lot of fun writing “Spell.” I’m feeling pretty amped about our CD release coming up. I knew right away that I wanted to connect with Modern Lady Fitness, and it worked out beautiful that they had just finished their own CD “AWAKE.”