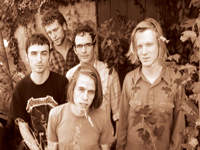 As you read this, Graham Parsons is rattling around in a van as far north as Calumet. Joining the singer/guitarist is the rest of Kalamazoo-based The Go-Rounds (Gitis Baggs, Andy Catlin, Adam Danis, Tod Kloosterman,) along with ten other musicians bandying keyboards, drums, brass, strings; an ambitious orchestra complete with back-up singers, a family of sorts, forged inside the recording studio known as Double Phelix. The Kalamazoo studio was born out of the initial flourish of inspiration shared and propagated by a slew of musicians gravitating around the coffee-house/venue known as The Strutt, which closed eight-ish months ago when “dark days” fell upon the well-intentioned, creative-cultivation hub. Parsons woefully recalls some musician/tenants getting robbed, evicted or having electricity-cut “as Strutt approached its eventual demise,” but, still, “we continued making music and our operations were eventually moved to the other side of town.”

Kzoo band Elk Welcome had a spot in an old oil refinery in the industrial district, the (re)-birth-place of the new collective: Double Phelix. Their M.O., Parsons said, “is simply: create! Create and keep doing so no matter what. There are no such things as 'album cycles' or 'calculated marketing decisions' involved in the Double Phelix philosophy.” Parsons said (back in June) that their eyes are set on running their own Brill-Building-pop-esque “Song Factory,” girded by the forceful swell of talent between each participating player. Any contributing writer (bringing in works for their weekly sessions) has a handful of session-musicians ready to accompany and help arrange, with a studio-set up, then, ready to record. I think I hear a compilation coming, but that’s my own conjecture.

As you read this, their glorious musical gaggle is heading back down from Torch Lake, winding down their summer tour propping the Go-Rounds second album Feathername (out on Earthworks Music). These songs are “a little softer, more dense and orchestrated,” Parsons said, noting that it was initially going to be a ‘solo-record’ but soon enveloped each and every Go-Rounder. And it’s just Go-Rounds, now, (formerly known as Graham Parsons and__), since, he admits, it can confuse: “Are you…the real Graham Parsons? Yes! I’m the dead one!” he jokes.

Parsons, aside from writing/recording, keeps himself busy organizing Farm Block Fests to raise funds for the Dan Schmitt Gift of Music charity which provides free lessons and instruments to underprivileged kids: “they may never have the chance to play a single note otherwise.” Local musicians provide lessons to students who acquire free instruments to learn and play – this gives back to the community, demonstrating to members of the music scene the “positive purpose” the positive purpose they can achieve beyond writing, recording and performing.   Until now, the Gift of Music, (started up after the death of Parsons’ best friend, Schmitt), was only in the Go-Rounds’-singer’s hometown area around Keweenaw. “Now, the Double Phelix crew and others are branching in Kalamazoo and hope to be working with a dozen schools by next year with an array of potential programs: beat-making, music production, to banjo and violin.”

Farm Block Fest 2012 went down Aug 3 – 5 up near Keweenaw; a collaboration with Keweenaw Krayons, featuring the serenaded support and performing talents of more than two dozen Michigan musicians/bands.

The band plays Grand Rapids (Founder’s Tap Room) on August 11. The tour winds down this month and the group gets back to recording. “We want to keep making records,” said Parsons. “And, with anyone.”