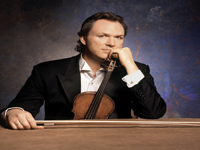 Stephane Grappelli once said of Mark O’Connor, “He’s not what you would call…human.” No small compliment coming from the man who many agree was perhaps the greatest exponent of improvisation on the violin, and who himself was considered a superhuman musician. And Grappelli’s assessment of O’Connor did not come out of a cursory familiarity with his playing. Grappelli hired him to be in his band, when O’Connor was still a teenager. But, we don’t just have to take Grappelli’s word for it. Now 50, O’Connor, like Grappelli, is considered one of the greats of the violin, having performed and recorded with, among others, Yo Yo Ma, Chet Atkins, Renée Fleming, Edgar Meyer, Bela Fleck, Pinchas Zukerman, and Wynton Marsalis. And, by some measures, he has possibly surpassed his old mentor. While Grappelli was the premier name in jazz violin, O’Connor is an incredibly versatile musician, able to seamlessly flow between classical, (his Fiddle Concerto, is one of the most frequently performed violin concertos of the past half century) folk, ragtime, blues, jazz, bluegrass, and country (he’s been named Musician of the Year a half dozen times by the Country Music Association). He is a prolific composer, having written, in addition to concertos, string quartets, choral works, a symphony and other orchestral works, countless pieces for solo violin, and for the soundtracks of many movies and documentaries. His recordings have sold millions and he has won two Grammy Awards.

O’Connor was a child prodigy, already winning championships on violin, guitar and mandolin as a young boy and a teenager and, in addition to Stephane Grappelli, he was mentored by many great musicians. He has long acknowledged the support he received in his youth and has devoted a considerable amount of his time and energy over the years to help foster young people’s interest in stringed instruments and to help develop their abilities in music. His annual fiddle camps in Tennessee and California draw students from all over the country, and even from overseas. In the past few years he has begun publishing what will eventually be a ten volume series of books entitled, The O’Connor Method — A New American School of String Playing. O’Connor has only appeared in Ann Arbor a few times, once headlining the Ann Arbor Folk Festival and once performing with banjoist extraordinaire, Bela Fleck at the Power Center. His show at the Ark on Saturday, August 25 will be his first at the famed folk venue. It will be a rare opportunity to see him in the confines of an intimate, acoustically perfect setting. He will be featuring music from his latest release, American Classics, which pays homage to the traditional Appalachian music of his childhood, but also includes some of his original compositions. He will be accompanied by Melissa Tong on piano and, in keeping with his longtime dedication to teaching the next generation of fiddlers, he may also invite some local string students to join him on stage for part of his show, to demonstrate tunes and techniques from his O’Connor Method.