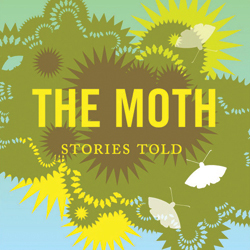 A survey some years back that found the number one fear of most people—surpassing even the fear of death—was that of public speaking. Clearly not getting that memo are the many volunteering to tell their stories in front of large audiences as a part of Ann Arbor’s Moth StorySLAM.

Modeled after the very popular NPR radio show, The Moth Story Hour, Ann Arbor’s version takes place on the third Tuesday of every month at the Circus Bar. The format is simple; every Moth night ten storytellers are chosen, at random, from those who sign up, to tell a five minute TRUE story. Three teams of judges, volunteers selected from that night’s audience, adjudicate, and the teller with the top score goes on to compete with the year's other winners in the next GrandSLAM Championship.

Contestants are required to tell stories related to the theme of the month, which is posted on the Moth’s website earlier. Well known actor, singer and comedienne, Satori Shakoor hosts, and the Circus Bar is always jammed with lines forming outside well before the doors open at 6pm for the 7:30pm show. With admission at $5 there are few better entertainment deals in town.