Born and raised in Chelsea, Jeff Daniels is a local boy. And he still lives here. Since founding the Purple Rose Theatre in 1991 Daniels’s contributions to the local performance arts scene have been unmatched. He has written more than a dozen plays that have been produced at the Purple Rose and will pull up the curtain for two new short plays in the theatre’s Spring Comedy Festival.

Whose idea was it to do this festival?

Have you done a festival like this before at the Rose? 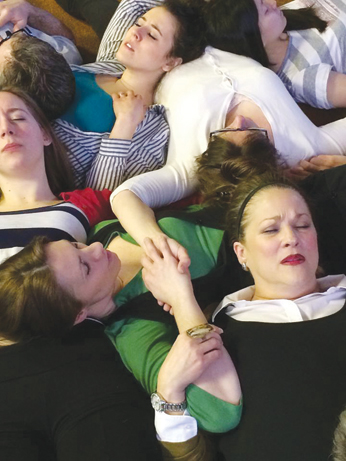 We did it several years ago. We love comedy and it’s a chance for us, guys like me and David McGregor and Carey Crim, who have written full length plays and had them produced, to write short stories vs. novels. You still have to have a beginning, middle and an end in ten minutes or fifteen minutes, but it’s a little different than ninety minutes. It also allows chances for the up and coming playwrights. It’s a little less daunting to write something ten or fifteen minutes long than to be saddled with a full length. It’s a way to kind of help them, as well as allow some of us who have written [before], to do something a little different. And I think the audience enjoys it because we tell them right off the bat, “It’s comedy. We’re here to entertain you, in a kind of literate way.” It should do well. It’s a wonderful exercise, to be honest, as a writer.

Let’s talk about one of your new plays for this festival, Anatomy of an Argument.

Based on recent events. [Laughter]

I’ve been married to the same woman for almost 32 years.

Alright, so you know. [Laughter]

The script I saw had the names of some of the actors at the Purple Rose, rather than names of characters. When you were writing Anatomy of an Argument, did you have those actors in mind?

Well, they’re the cast. This is a little different. Guy (Sanville) came to me and said, “We’re putting together the Comedy Festival and here’s the cast.” And I said, “OK, well what do you want?” And The Guitar Lesson [a second play] kind of came up, it’s a two-hander (for two actors) and then what he said was, “I don’t have one for all six actors” and so I just looked at the cast list and kicked it around for a couple of days and then one thing led to another, (laughs). In the meantime I’d gotten into a pretty good one in my own marriage and so I said, “Oh, there it is, there’s the play. There it is.” 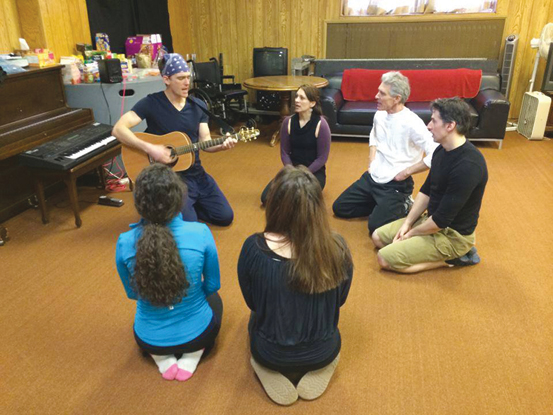 I wouldn’t say it’s tailored to them as actors. It was more just assigning. Anatomy of an Argument really is…it’s an instructional seminar for the audience; there are only really two people up there. There’s a man and a woman. It’s a little bit like I used to do at forensics in high school but also what we called Interpretive Reading at Central Michigan, where you would take…oh God, we did John Gardner’s Grendel, and two of us would just do whole sections of the book as a performance piece. It’s a little bit like that. You know Tom says, Rusty says, Brian says, but it’s all the same guy basically.

Guitar Lesson [the second play Daniels wrote for the Comedy Festival] is tailored for the young student who is superficial as hell and decides she’s got the blues, and the older guitar teacher, who really wishes he were doing something else with his life, and where you tailor that for Tom Whalen and for Lauren Knox [two of the actors in the cast of the festival].

Let’s talk about The Guitar Lesson. There is always a huge gulf between a teacher and a beginning student, yet you often hear teachers say that they learn from their students. Can you talk a little about that?

Inside this guy who’s been stuck teaching guitar, to beginners mostly, he’d probably envisioned himself as Segovia in a fantasy life and suddenly he realizes that maybe he’s got a little of Howlin’ Wolf inside him. It’s a funny way to end it – even somebody like the teacher can learn something. And then off she, the student, goes to the mall. (Laughter)

Which is where she came from in the first place. [Laughter]

Yeah. Brevity is difficult. There is no meandering, listening to yourself write, and then you get to the point. I mean at the end, in a full length, you go through and you take out filler…you take out, “No, I’m just treading water there.” It’s gotta be moving forward line by line. But it really has to do that in the shorter pieces. You know Mamet said something that I’ve hung on to—and it works in a full length, with each scene, but in particular in a short play—is, “Start as late as possible and finish early.” Meaning start as late into the scene as you can and get out before it’s ended. That helps. But basically the structure is the same, there’s a beginning, there’s a middle and there’s an end. A story is still a story; it still has to play by those rules. You just have less time. I can think of in Anatomy of an Argument, I had a whole scene, about how they met and …gone…gone. It took too long, it didn’t get me anywhere and instead, it was…right to it. Let’s get right to it.

I remember you saying once that you need to be a little bit ruthless with your material. You can’t fall in love with a scene or a line. If it doesn’t work it has to come out.

Yep. Yep. Sure does. And it’s usually the deadline of turning it in, when the executioner comes in. (laughter)

Will you get a chance to see the shows once they’re up and running?

I think so. I’m around a little bit before I go back to Newsroom, so I’ll probably see a rehearsal. Certainly I’ll hear it read, which will help, and sometimes they’ll Skype or they’ll send me a video of a run through and… you know, I’ve been in the theater, I can kind of see what’s going on. But I’m real confident. This group has grown into a true professional company and I love that about what the Purple Rose has become. And part of having a company of professional actors, is that you give it to them. Arthur Miller said, “I look forward to seeing what my work inspires in others.” And, as an artist I live by that. There are not a lot of stage directions in my work, certainly not too many parentheticals like, “He says, incredulously…” all that ‘helpful’ stuff. As an actor, I just cross it out before I even memorize it. So I don’t do that to these folks. I go, “Here’s the play, I look forward to seeing what you guys do with it, eventually.”

Part of what the Comedy Festival does is, we go, “You’ve not seen any of these. This is not a rerun, this is not something you’re familiar with, you’re not gonna go hear songs that you’ve heard before that you want to hear again. This is all new.” And that’s exciting. There’s a thrill in that. At the Purple Rose we pride ourselves in finding good writers and then working on the pieces they write for us, and making them the best they can possibly be, so that when you leave, you go, “That was worth it. And I had no idea what it was going in.” I like that. It’s always been me looking for something brand new and original vs. ‘let’s do something that we’ve done before, that they’ve seen before and now they’re going to see it again.’ You know, the restaging of a musical or a famous play. We do that, but I really get excited when we do what we’re doing with things like the Comedy Festival. Brand new, brand spanking new, when the curtain goes up.