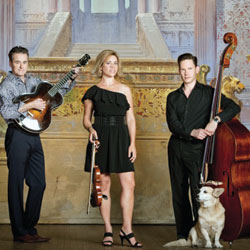 The Hot Club of France was the band name of one of the greatest jazz combos of all time; the group headed by guitarist Django Reinhardt and violinist Stephane Grappelli enthralled Europe in the 1930s and 1940s. Though the band hasn’t been around for over six decades, and all the members are presumably playing lyres somewhere up above, their music, and equally importantly, their style of playing, continues to thrive.

There are Hot Club ensembles in New York, San Francisco, Philadelphia, Detroit and elsewhere—and then there is the Hot Club of Cowtown. Where are they based? Well, since 1988, in Austin, Texas. So why did the trio of Whit Smith (guitar), Elana James, (fiddle) and  Jake Erwin (standup bass) choose that moniker for themselves? (Try calling Austin Cowtown and see how popular it makes you with the locals!) No, Cowtown does not refer to a specific town, but rather is a nod to Western Swing, the other of the band’s main influences, Western Swing was a very popular style of American music from the Thirties till the early Fifties, when it was elbowed out by Rock ‘n Roll. The HC of C crosses this high energy, freewheeling improvisatory variant of country music, with the equally unfettered, joyous hot jazz of Reinhardt and Grappelli. James says, “There’s a swinging, driving rhythm, hot soloing, a lot of improvisation, and a kind of abandon and enthusiasm in the playing and the songs themselves. That is what has drawn us like moths to its flame.”

HCof C formed in 1996 and toured heavily for a time, then disbanded for a while and finally regrouped a few years ago. “The unalloyed joy of playing together has deepened after all the ups and downs of years of touring, recording, working together, and moving ourselves back and forth across the globe, “ says James. “We’ve realized what we’re about, and more importantly, what we’re not about. Whit, Jake and I are all very modern people, but we respect traditional things and have similar tastes. So while we improvise through the majority of our songs over the course of an evening, it’s like having a conversation every night about something different. We don’t always see eye to eye on things as a band, which is totally normal, but on stage, we get along well together, we have a unified point of view, which is very precious and, in my experience, rare.”

Their most recent album, What Makes Bob Holler, is a collection of Bob Wills’ Western swing songs. But when they return to the Ark on Friday, February 22nd, they’ll also showcase their other main influence. “Our next album (out in early 2013) is a collection of hot jazz standards and gypsy tunes (as opposed to the more western side of things),” says, James, “So likely our Ark show this time will be a little heavier on those.”