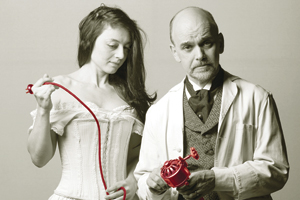 What drew you to this play?

Wolber: I’m a big fan of Ruhl’s. We produced The Clean House by her a few years ago. I keep tabs on her writing, ask for her scripts before they’re even published, and
this was one I had an opportunity to read as it was running on Broadway.

There’s a lot of tongue-in-cheek irony. Talk about that.

Wolber: There is a lot of humor that you would expect, but it’s also about their lack of awareness, their lack of understanding. Even the doctor, who is treated as the expert, with the women coming to him for diagnosis and treatment, even he doesn’t have an understanding of what exactly is going on.

Regan: Women have been diagnosed with hysteria forever. We’re so complex that oftentimes it’s easier to quantify us somehow. We are mysterious creatures—we all are very mysterious—but I think because women may be a little unruly and scary and powerful, it’s easier to put us in a little box. And of course the women knew, for the most part, intuitively at least, what was going on, and that they needed to wake up.

I think the play is about becoming alive, living in the moment. I think we kind of sometimes kind of numb ourselves with various distractions, whether imposed on us, or whether by choice, we numb ourselves instead of looking each other in the eye and becoming alive in that moment. And the man in the play, Dr. Givings, also has an awakening—a spiritual and sexual awakening. It’s great that it’s not just about women; although that’s the way we go in. I think the journey is for men as well as for women.

How does the journey incorporate equality and understanding?

Wolber: It’s his awakening and coming to understand which I think also makes for this wonderfully rich and beautiful moment in the culmination of the play. Both men and women will come out of this play with perhaps a little more understanding of each other.