An Interview with The Go Rounds 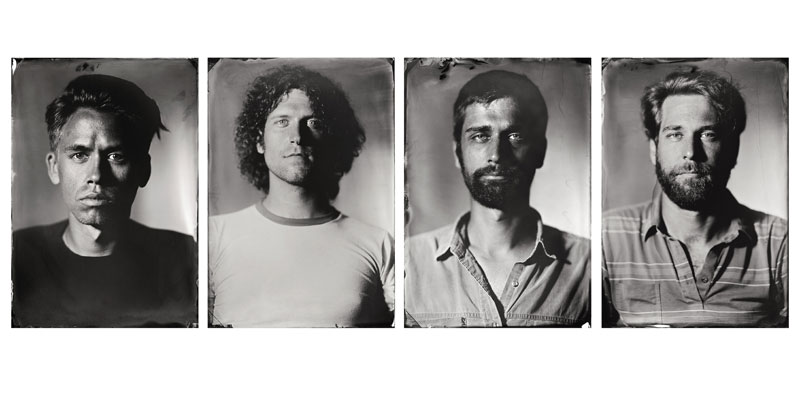 When I call him, Graham A. Parsons is about as far north as you can get in this state.

“This is one of the ends of the Earth,” says the singer/songwriter, in a low-key but exuberant voice. “It’s one of the most unique and beautiful places on the planet!”

When you’re up in the secluded shark-fin of the Keweenaw Peninsula, you may as well be out on an island, at least from the down-state gaze of Ann Arbor or Detroit. When we speak, it’s early August, and Parsons is up north with his band, The Go Rounds–but what’s he doing all the way up there? They’re building something. Or are they encouraging something? Willing it into existence? A vibe, a scene, what do you want to call it? Leave your cynicism at the door…We’re about to have an interview.

Parsons is walking as he talks on the phone, re-organizing, packing up, getting things together to drive back home to Kalamazoo and “…dive back into some CD release shows.”

He’ sd just wrapped up another Farm Block Fest, an annual multi-day music event that welcomes about two dozen bands from all around the Great Lakes region up to his hometown in the Keweenaw Peninsula in order to raise funds for the Dan Schmitt Gift Of Music Education Fund. This was the eighth Farm Block Fest and it couldn’t have gone better. A month later, having been home for a bit, the band (including Drew Tyner, Mike Savina, and Adam Danis,) are gearing up for a record release party at Bell’s Eccentric Café.

And when Parsons talks about the Go Rounds third album, Don’t Go Not Changin’, which gets released this week, he says that he considers it the modest soundtrack of “…four best friends taking on the world.”

“Now, who,” he wonders aloud, “couldn’t get behind something like that? Especially if we’re super intentional about it.” He uses this word, intentional, three times throughout the interview.

“We’ve had great conversations,” he says, referring to his three bandmates. “We’ve been asking: ‘Why are we doing this?’ Really. We’d have to go either all the way, all in…or…there’s no point. And we have to go all in, not for ourselves, but, to serve the people and create a positive experience for the audience…or else… nothing. There’s nothing else but that. It’s all about the positive intentions of the group.”

And Parsons will stop you right there, if you shake your head. “Yeah,” he says, “it doesn’t have to be this earthy, hippy-dippy, organic obsessed kinda trip…”

Parsons knows what he’s talking about. Not only did he and the Go Rounds strive (and eventually succeed) to secure Farm Block Fest’s warmly regarded reputation as an eight-year long annual tradition, becoming a Michigan mainstay amid the Indie festivals, but Parsons was also an integral component of the assemblage of Kalamazoo’s modern music scene.

How did that happen? It was through the Double Phelix collective, an eclectic tribe of creative-types, producers, musicians, and artists from varying genres, mediums and mindsets, who convened (and blossomed) from within the unassuming confines of Kzoo’s industrial district.

Get Parsons talking about The Go Rounds first record (Feathername) and he gets emotional– a billowy blend of wistful and giddy –because memories of that record, which came out in late 2012, take him back to the “height of the Double Phelix era…”

The impact that creative collective had, as idealized and energized as any close-knit scene that came before it, is evident on Parson and The Go Rounds music, particularly with Don’t Go Not Changin.

A year-long lifestyle orbiting around the constant writing, recording and mixing of music, feeling exhilaratingly pulled by the gravitational forces of reciprocal inspiration rippling from out and into each piece inside the Phelix walls, each band, each contributor… that kind of community instills in the participant a sense of sincerity that Parsons couldn’t find anywhere else. So, with the Go Rounds, the MO became spreading that sincerity to the outside world, to the stage, into any venue they entered…and to impress it upon the audience.

“There continues to be so much cliquey bullshit in the music realm and there’s so much exclusivity,” says Parsons. “And, the point [of Double Phelix] was: ‘We’re all coming together to do this thing, we’re all very different, we have different styles and techniques and tastes, but we’re all coming together to showcase what we can do as a group…’ And, we went through so much together, musically and emotionally, having to be sympathetic and supportive to other people’s creations and personalities. The community, it holds you responsible and keeps you present and you remain humble…”

The musician, be it Parsons or any member of the Go Rounds, can learn to become comfortable, to become wholly themselves through their music, and to do so amid others, in front of others. That’s the poignancy of the echoes and reverberations of Don’t Go Not Changin’. That kind of energy is transcribed onto these new songs.

The Go Rounds were always toeing the lapping tides of a new, radical Americana music’s next wave, but Don’t Go Not Changin’  is the album where they leave the shore and beat onward out to sea…There’s a fluid groove and a vibrant blush of reverb, there is dazzling haze framing the crisp melodies. The songs are infused with a jazzy, dare we say, post-rockist bent of blending meticulous technique with the refreshing fury of impassioned sprawl and spill… There’s a twang and a stomp to the guitars and drums, there’s a trill and a croon to the vocals, there’s a thrum and a shimmer to the organs and flecks of distortion. This is music to move to, yet you’d still call it Indie-rock. It’s music with dirt under its fingers yet it might still fit in a gallery space or…even in outer space.

The Go Rounds “Make It Sweeter”

The Go Rounds saw each track on Don’t Go all the way through, eyes toward the horizon and blocking out limiting conventions wobbling at their peripheries; each track gets room to breathe, with no bars shaved off to keep to any pop radio type’s four minute guidelines. “We worked to serve these songs,” says Parsons.

A couple of years ago, the Double Phelix slowly scattered. Dissolved would be the wrong word, it was more like the seeds jettisoned from the stem. And The Go Rounds went their own way. This was just as Parsons was knee-deep into his second album, Purple Mountain Travesty.

First came strength in numbers and that helped Feathername flourish. Purple Mountain Majesty was constructed amid a more haphazard period for Parsons, with members coming and going. If Phelix showed him strength in numbers, now it was time for The Go Rounds, to find and utilize strength through self confidence. “And…” says Parsons, “strength in hard work, really. So…that was the beginning of the resurgence there.”

The current lineup solidified a little more than 18 months ago. What’s followed has been a propulsive energy that only accelerates. What does it sound like when a group of musicians transmit the intensities of those earnest creative approaches that were honed inside the Phelix onto their own work? To be “intentional,” to serve the song, to serve the listener… ?

And that shouldn’t sound hippy-dippy by now…  “It’s all about positive intention,” Parsons says. “People at shows want to talk to us afterward and that’s something, because if you’re up there acting all dejected and dark or…”mysterious…” then people won’t want to talk to you after a show. We want to make connections with people and I know that sounds cheesy, but…I don’t know…” He takes a second. “We’ve figured out a special little place from which to present our music and…God, it feels good!” This exertion is half shouted and after another second he, adds, “It’s so important and we see that now!”

Almost as though he can already sense the proverbial haters cocking their eyebrows, the ever-pensive Parsons comes back quickly with: “Our generation is so fucking terrified of being sincere…”

And at that remark, my ear perks up and I smile…

“Just, grasping someone’s shoulder and just saying to them: ‘Hey, you’re really great at what you do!’ Our generation is terrified of that kind of sincerity and I don’t wanna be…I wanna buck that trend. Irony is worth its weight in gold right now and that’s bullshit! I don’t think there’s a whole lot of value in being ironic and apathetic. I worry our generation is losing the ability to truly listen. Not entirely, of course…but… There’s not much value put on vulnerability, sincerity, community. Maybe that’s a little too vast and broad-reaching for what we’re talking about. But, I think about this a lot.”

Irony is one thing, I tell him… But cynicism is another scourge.

“Who else are people going to communicate best with more than the bands they choose to listen to?”

And at that, I don’t immediately reply, allowing that question to become rhetorical and possibly summarizing of the Go Rounds newly found intention and solidified sense of purpose.

“Our goal is to just spread what we’re feeling, which is just: gratitude. We’re diving in, man…we’re taking it super fucking seriously. It feels right, it feels good, and I think we’re doing it for the right reasons.”

from “Lay With Love,” off of Don’t Go Not Changing
It’s not some radical new-agey sabbatical…
Can’t we try and keep it simple?
As a matter of etiquette, I’m not letting it bring down any other people
I know you’ve heard it before, but I’m singing it tonight…