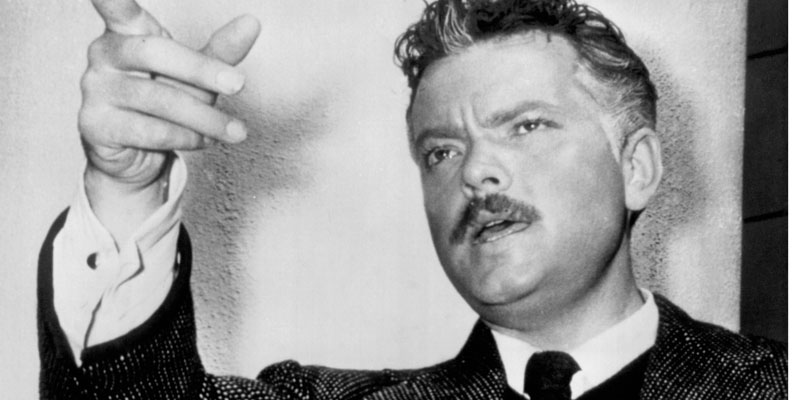 But A. Brad Schwartz names “War of the Worlds,” Welles’ legendary 1938 radio broadcast. “As a kid, I had trouble sleeping, so my parents would play old radio shows. So I grew up with Orson Welles’ voice,” says the recent graduate of UM’s History and Screen Arts & Cultures programs. “When I was a high school freshman, we did this unit on the 1930s in a sort of history version of a science fair. I had an interactive element, where I got a copy of the broadcast script that I set up on a music stand with a microphone, and I directed a classmate through a performance. I got a good grade.”

Nonetheless, Schwartz didn’t consider himself a worshipper at the church of Orson Welles, unlike many film lovers in the pre-digital age (this writer included). “I’m pretty sure ‘Citizen Kane’ was the only movie of his I’d seen,” he says. “But when I found out about the archive, and the fact that it had hundreds of letters that nobody had gone through in years, if ever, about the ‘War of the Worlds’ broadcast, I said to myself, there’s a book in there.”

Schwartz wrote that book, “BROADCAST HYSTERIA: Orson Welles’s War of the Worlds and the Art of Fake News” (Hill and Wang, 2015), first as his graduate thesis, then rewriting it in its current form in time for the centenary of Welles’ birthday, on May 6, 1915.  He calls the broadcast “the world’s first viral media event.” As he read the hundreds of communications in the aftermath of the broadcast he noticed that “when you’re living in tight quarters, it only takes one person to tell five people, and then they tell another five, and that’s how rumors spread like crazy. So in college dormitories, prisons, apartments, houses in dense neighborhoods, that was where the rumors really took off. A phone operator in South Dakota heard about the ‘invasion,’ and she then told everyone on the exchange about it. This was Twitter before it existed.”

He’s far from the only person whose life has been radically changed by the Orson Welles archive now available to the public and researchers at the Special Collections Library of the University of Michigan. “When I think of the archive, I feel like the reporter at the beginning of ‘Citizen Kane,’” says Philip Hallman, Field Studies Film Librarian. “It’s a remarkable warts-and-all overview that gives you such a personal view of Welles.”

He cites letters provided by the artist’s eldest daughter Chris Welles Feder,. (Welles proved to be as unconventional in naming his first daughter as he would be with everything else; “Chris” is short for “Christopher.”) “The letters are not flattering,” says Hallman. “They’re from when Welles was headed to California and starting a career. He’s corresponding to his wife Virginia Nicolson, Chris’s mom, and the marriage is falling apart. It’s sad to read these things, and yet you end up with this personal view that only these letters could do. Chris has been incredibly generous. All the donors have been amazing.”

The other donors include Welles’ longtime companion Oja Kodar, and Chris Wilson, the son of Richard Wilson, who Hallman describes as “the sort of ‘wind beneath the wings’ guy for Welles. Welles wasn’t a particularly good business person. He’d get bored and move on to another project. Richard Wilson recognized that all sorts of papers and artifacts would be important and he hung on to them.”

The University acquired the materials via Catherine Benamou, currently Associate Professor of Film & Media Studies at UC Irvine. During Benamou’s UM stint, she conducted extensive research on Welles’ fraught project “It’s All True.” The documentary, shot in Mexico and Brazil, was never completed, and resulted in a number of catastrophes,—chief among them the butchering of Welles’ follow-up to “Kane,” “The Magnificent Ambersons.” With Welles gone, and with some unfavorable comments from a test audience—also part of the collection—the studio slashed out footage that appears to be irretrievably lost.

“We may never find the lost scenes that were gutted from ‘Ambersons,’ “says Matthew Solomon, Associate Professor and Director of Graduate Studies in the UM Screen Arts and Cultures program. “But I'm convinced that the archive may hold even more surprising secrets ‘hidden in plain sight.’” As teacher of a special Welles seminar, he turned students loose on the archive, giving them an “extraordinary opportunity to get to know the person behind the legend. Reading Welles' personal correspondence and going through his papers,” says Solomon, “they become acquainted with him on a fairly intimate basis: his struggles, his faults, as well as his passions. By the end of the course, students know him (and refer to him) on a first-name basis, as ‘Orson.’”

In addition to Schwartz’s book, so far highly acclaimed by NPR and Vanity Fair, Solomon reports that “Vincent Longo has been able to document just how innovative Welles was in his 1946 multimedia production of ‘Around the World,’ a play that has otherwise been entirely overlooked by researchers. Just this term, while preparing their exhibition for the Hatcher Library Gallery, students discovered that Welles was exploring the possibilities of aerial cinematography and planning a film about the Jewish people—things I've never come across in any of the books I have read about Welles.”

It’s Welles beyond “Kane”—and, for Issa Clubb, widening the focus from that legendary first film is a wonderful thing. “There’s an Orson Welles narrative, in which he makes the greatest move of all time and then goes into straight decline, and becomes almost a cartoon,” says the Senior Producer for the Criterion Collection, who has worked on special editions of Welles movies that include “Mr. Arkadin” and “F for Fake.” “To be honest, my first experience of Welles was in ‘The Muppet Movie’—I think he played the boss or something.” (The character’s name was Lew Lord.) “But he was doing things like that, and commercials, in order to finance movies however he could. The writer Jonathan Rosenbaum argues that Welles went from being the greatest studio director to being a guerilla filmmaker.”

Cinetopia attendees can experience the full spectrum of Welles offerings, from the “The Magnificent Ambersons”—which Hallman, Solomon, and Clubb all agree is still a terrific movie despite the studio hack job—to lesser-known creations, including a restored version of “It’s All True,” Welles’ Shakespeare movies “Othello” and “Chimes at Midnight,” and “F for Fake,” which Solomon calls “way ahead of its time, even 40 years later,” and which Clubb simply calls, “a hoot.” The film, whose French title is the apt “Truths and Lies,” showcases Welles’ sleight of hand literally and figuratively. “He thought of himself as a magician, entertainer, kind of a huckster,” says Clubb. “He loved the raconteur sense of himself, and even embraced this image of himself as kind of blowhard.”

Movies are only one aspect of the syposium. Solomon cites “once-in-a-lifetime events.” One is a multimedia performance at the DIA of the recently rediscovered “Too Much Johnson.” The 1938 silent comedy was Welles' first professional film, and was never publicly screened. Nor was it intended to stand alone; he planned to mix live action with the film for a Mercury Theatre stage presentation. This production will be presented as close to the director’s original intent as possible. The festival also offers a rare chance to see “The Unknown Welles,” two programs of unfinished films assembled by Stefan Droessler of the Munich Filmmuseum.

Panel discussions will bring together various distinguished Welles-ians to discuss different aspects of his work. Schwartz, Benamou, Solomon, Longo, and the esteemed writer and teacher James Naremore will discuss how the archive assists in Welles scholarship. Clubb and Rosenbaum will join another panel that will discuss the Welles legacy.

Hallman is particularly grateful for discussions with donors Chris Wilson and Oja Kodar (Welles Feder is unfortunately unable to attend). “We are so deeply grateful for these donations, and thrilled that we’ll be able to thank the donors in person,” he says. “This opportunity—to work with primary materials—doesn’t happen that often in the Internet age. What students get from actually being able to handle and interact with these vital documents that show every aspect of the fimmaking process, and that allow us access not just to the genius, but to the man himself—it’s just incredible. Welles changes lives. And there’s so much more to learn about him.”

“Phil’s analogy—that the archive is like the beginning of Kane—is great,” says Solomon. “The vastness and confusion of the archive always makes me think of the end of Citizen Kane when we see the massive hodgepodge of things Kane assembled over the course of his lifetime, before Rosebud is revealed. We may never find the lost scenes that were gutted from ‘Ambersons,’ but I'm convinced that there are unexpected discoveries to be made that we cannot even anticipate!”

Complete information on the Orson Welles Symposium and its events.