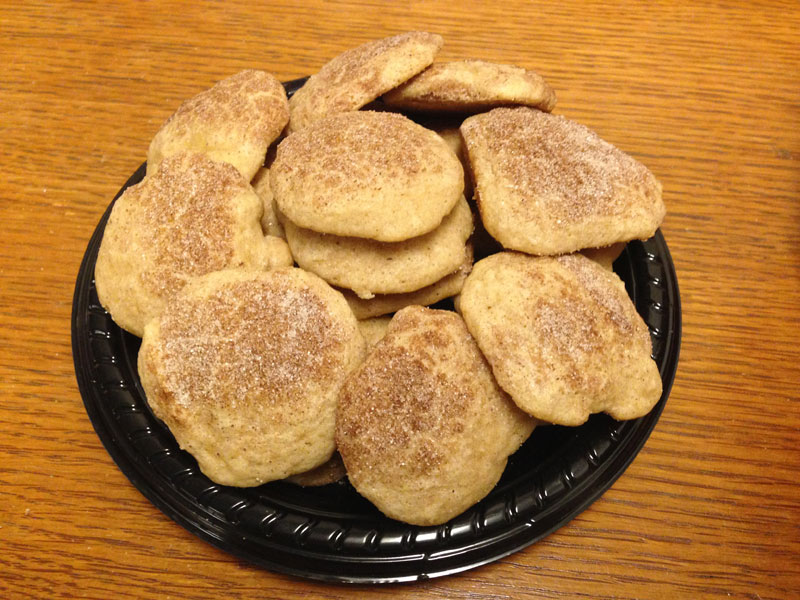 This month’s recipe highlights the culinary spice cinnamon. In traditional American cooking and baking it’s right at the core of the canonical “sweet spices”, along with nutmeg, cloves, and ginger, and modern cooks take its availability for granted. But there’s rather more to the story.

For starters, when you buy cinnamon for cooking, you might be getting either of two related, but botanically distinct spices: true cinnamon, Cinnamomum zeylanicum, or cassia, Cinnamonum cassia. (Recipes in medieval European manuscripts, interestingly enough, treat them as distinct ingredients.)  Both have been in use at least since the Egyptians employed them in embalming.  In the ancient world, cassia was probably mostly traded from China. But from the 16th to the 18th century, control of Ceylon for its cinnamon crop (along with others of the Spice Islands) was at issue in bloody trade wars between Portugal, the Netherlands, and England.

Our recipe comes from The Keene Cook Book (No. 2): A Collection of Recipes Tried and Approved by the Ladies of The First Congregational Society, Keene, N.H.,1898.  Typically for a charity cookbook, The Ladies had pretty clear ideas about what their readers should be doing with themselves, as this dedicatory page shows

Also typical was the practice of using humorous rhymed epigraphs to begin chapters, such as this one for the Cake chapter.

It wasn’t until late in the 19th century that cookies, as we know them, begin to come into their own. The American term cookie is descended from the Dutch koekje, “little cake”, and in 17th, 18th and 19th century cookbooks recipes for cookies (or biscuits, in British cookbooks) generally appear grouped together with cakes, large and small, under names such as seed cakes, jumbles, kisses, wafers, ginger nuts, hard gingerbread, “mackeroons,” etc.

The original recipe comments that they’re are “Very nice with ice cream.” They’re also a nice thing to serve alongside fresh fruit, as it comes into season – strawberries, early blueberries, blackberries and raspberries, even gooseberries or a conserve of currents, if the Farmers Market happens to have them.

Mix the cinnamon and sugar for the topping and set aside

Cream butter and sugar until light

Beat in eggs one at a time, until very light and fluffy

Scrape the bottom and sides of the bowl and beat briefly

Mix the soda and cinnamon into the flour

Mix the flour and the buttermilk into the bowl in several additions, beginning and ending with the flour

Scrape the bottom and sides of the bowl and mix briefly

Drop by teaspoonfuls on a greased or papered cookie sheet, about 1 ½” apart

Sprinkle each cookie with about  1/8 tsp of cinnamon sugar

Bake 5 minutes, turn the pans in the oven, and bake another 5 minutes, until set.

The result  is quite mild by modern standards. For something with a bit more zing, it’s safe to increase the cinnamon by a half, or even double it. You can also put 1/4  or even 3/8  tsp of the cinnamon sugar on the top

Dangerous Tastes: The Story of Spices, by Andrew Dalby

Spice: The History of a Temptation, by Jack Turner.