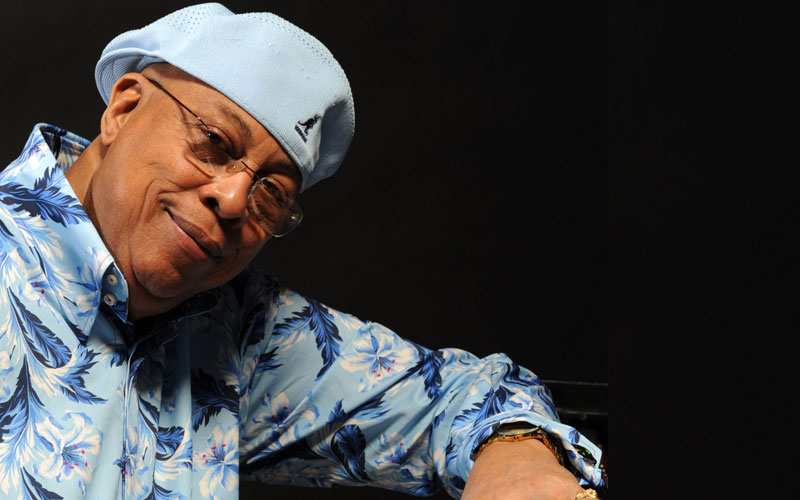 “Miraculous” is how critic Nate Chinen described the piano playing of Chucho Valdés in the New York Times, reviewing a 2012 appearance at Carnegie Hall. “Great hydraulic fountains of notes, each drop sparkling as it falls.”

Ann Arbor will get a chance to feel Mr. Valdés’ music rain over them when the five-time Grammy and three-time Latin Grammy-winning pianist, composer and bandleader appears at the Michigan Theater on November 8 at 4 p.m. with his current band, the Afro-Cuban Messengers.

“We’ve wanted to present Chucho for five years,” says Mark Jacobson, Senior Program Manager for UMS. “Mr. Valdés is an iconic virtuoso, a phenomenon on piano. He has giant hands, like Rachmaninoff.”

In fact, listeners shouldn’t be surprised to hear Valdés throw in a riff on that great Russian romantic, who he numbers as one of his favorite composers—along with Liszt, Chopin, and Debussy. His father, the late legend Bebo Valdés, was as fluent in classical as he was in jazz and Afro-Cuban music. In the movie “Old Man Bebo,” directed by Carlos Carcas (and available to stream on Vimeo), Chucho says, “The best lesson was simply being Bebo’s son, just watching him play. I think that I was also able to learn because my home was a great school.  I was in a musical environment to be envied.” Not only would the Cuban musical luminaries of the day visit; Bebo played with Sarah Vaughan, Dizzy Gillespie, and Nat King Cole, who recorded two albums with him in “terrible Spanish.”

Valdés Sr. threw Valdés Jr. into the deep end when Chucho was in his late teens; his dad told him that the only way to learn was by doing. When Bebo left Cuba after the revolution, Chucho stayed and continued to play.  In 1967, he, his bandmates—including Paquito D’Rivera—and other Cuban music stars formed the Orquestra Cubana de Música Moderna. Initially organized to play jazz and pop, the band experienced something of a revelation when someone brought an album by the group Blood, Sweat & Tears into the studio.

“We flipped out,” says Chucho. “It was a small band that sounded like a big band. I had been looking for that sound for years.” BS&T fused various musical genres—rock, blues, pop, jazz—powered by a killer horn section. Valdés , D’Rivera and his fellow musicians decided to do the same thing on their home turf, weaving together a complex tapestry of sound from Afro-Cuban traditions, popular dance music, funk, jazz, and whatever else struck their fancy.

The result: the group Irakere, a band within a band, formed in 1973, then became self-standing in 1975. Valdés served as the band’s primary composer and arranger. When Dizzy Gillespie and Stan Getz went to Cuba two years later—the first official American visit since the Missile Crisis—they were blown away by Irakere and raved about it to then-president of CBS Records, Bruce Lundvall, who signed the group some months later.  Irakere debuted, unannounced, at Carnegie Hall and was lauded by New York Times critic John S. Wilson describing Irakere as “pouring out tumultuous rhythms, sudden eruptions of massive ensemble sounds.”

Irakere would go on to win a Grammy for its album Live at Newport, and would continue into the early 21st century. The current tour, titled Irakere 40, pays tribute to the original band via Chucho’s new group, the Afro-Cuban Messengers. “In our first rehearsal of the old pieces with this band I cried,” says Chucho. “When I decided to do a tribute to that marvelous band, I also decided I didn’t want to do it with the charter members but with players from the generations of musicians that grew up and learned from Irakere. I thought it would be more meaningful. It’s a tribute from one generation to another.”

He’s thrilled to be making his Ann Arbor debut. “For me, it's very exciting to play at a great University. I hope the students and other people in the audience enjoy hearing this music from some of the most talented young musicians in Cuba— who are fantastic—as much we enjoy having this chance to honor Irakere's legacy.” His final advice: “Don´t miss it!”