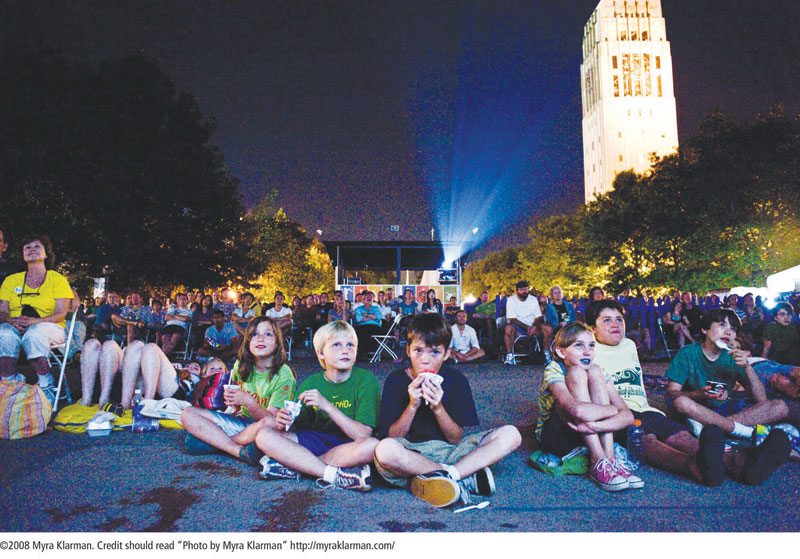 Mosquitoes, traffic noise, and heat are not the biggest obstacles to watching movies outdoors in the Michigan summer—at least not according to Russ Collins, Executive Director of the Michigan Theater and of Cinetopia Film Festival. It’s the light. “We’re just south of the 45th parallel, and very far west in the time zone,” Collins says, “so you can’t even begin to show a movie until 9:45 at the earliest.”

A baker’s dozen of outdoor movies—kicking off with the Oscar-ignored ‘Lego Movie—fill up the massive inflatable screen at the Ann Arbor Summer Festival. The movies cap evenings of outdoor concerts, family-oriented events, and what the website refers to as “open-air spectacles.”

As for that daylight issue, the Festival’s Executive and Artistic Director Amy Nesbitt and her crew are on it.  “The optimal film viewing experience demands the most controlled environment possible,”  Nesbitt says. “Of course, that’s not going to happen outdoors, but we do everything we can. We’ve got a great sound system and technical team and we change whatever lighting we can around the film area to make it as dark as possible.” It helps that movies are no longer projected on a concrete wall. The move to Ingalls Mall required a moveable screen, and Nesbitt says that the inflatable one is “pretty amazing. We have these big fans that blow it up, and it’s a pretty cool thing to watch.”

The curators look for titles with multi-generational appeal. At Top of the Park, accessibility includes having approximately a third of the movies close captioned—“especially great for musicals,” Nesbitt notes. And in addition to family classics like ET and Ghostbusters, Nesbitt is excited about Slumdog Millionaire and The Grand Budapest Hotel, which she says are perfect for “Ann Arbor’s dialed-in culture.”

Most important: the huge, laid-back audience. “When you watch a movie at home,“ Nesbitt says, “there’s no laughter, applause. You don’t get those collective gasps and squeals of glee.” Collins agrees. “Movies are meant to be seen on a big screen, in the company of other people. So even though you don’t have this perfectly dark room with a state-of-the-art sound system when you watch a movie outside, you do have this completely unique experience, and you share it with other people. Watching a movie at home is a compromised experience as well, no matter how big your screen is.”

And both say the experience doesn’t compare  to a drive-in. “Drive-ins were about this vision in the 50s, where you could experience a lot of life in your car,” Collins says. Nesbitt associates drive-ins with the sound of car doors slamming, and a general feeling of isolation—nothing like audiences relaxing on the grass, noshing on popcorn and other treats from Top of the Park vendors. “You’re under the stars on a beautiful June night,” she says. “We see generations of families. Casablanca is one thing to Grandma and Grandpa, another thing to Mom and Dad, and now the kids are going to have their own memory of it.”

Collins compares outdoor movies to dining al fresco. “The main thing about eating outside is that it’s fun. Sure, you might have to bat a mosquito away, and there’s smoke from the grill, but mainly it’s just a really fantastic way to spend a summer evening. It’s not just the food, it’s more about an entire experience of eating. It’s the same thing with outdoor movies. They’re about this entire experience of watching movies—which is so much more than just the movie.”