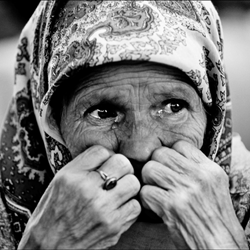 Nelson Mandela gazes through the bars of the prison that once contained his body. A Gulf War soldier’s face contorts as he sits next to his dying friend, helpless. Michelle Obama looks knowingly at the camera, her husband’s eyes closed for a moment.

And Santa jumps out of a helicopter.

These are just a few of the iconic images captured by David C. Turnley, the internationally acclaimed, Pulitzer Prize-winning photojournalist and documentary filmmaker who recently returned to his alma mater to become an assistant professor at the University of Michigan’s Penny Stamps School of Art and Design. He spoke to us about key moments from his childhood, career, and his new documentary, Shenandoah.

Where’d you get the idea for Shenandoah?
Obama made a comment on the campaign trail when he was in Pennsylvania: “In times of crisis, the working class cling to guns and religion.” Now, I was very excited about Obama’s candidacy, but I also think that working class America gets historically dismissed. And I was reminded that my dad and grandfather, who both played football, would always talk about this tough football that they played in these coal-mining towns. And I remembered that I had really wanted to make a movie about that.

So you didn’t know about the incident?
No. I was scouting around, and someone said, you’ve got to go to Shenandoah, where these four star football players from the local high school had beaten an undocumented Mexican immigrant to death. Now the media had already descended on this town, and I wasn’t sure that they would even talk to me. I saw these two men sitting in lawn chairs. Well, they started talking right away. That was August, 2008, and the election was going on, and one of the great things about this part of the country is they don’t pull any punches.

But what was great was that football had given us discipline; you have to have stamina, physical and emotional, to be a combat photographer. – David Turnley

Did the locals see you as this fancy photographer from New York?
Well, I didn’t see myself that way. I didn’t ever want it to be an “Us/Them” film. So I wanted them to relate to how we were alike, not how we were different. And the fact that I had been a walk-on wide receiver for, like, 10 minutes for Michigan was huge.

So how does a wide receiver end up being a photographer?
My twin, Peter [also an internationally acclaimed photographer], played football as well. He was injured when he was 16, and my parents got him a camera. And we both started to take pictures, and we found the same passion that we’d had for football. But what was great was that football had given us discipline; you have to have stamina, physical and emotional, to be a combat photographer.

Even those high school photos have empathy and depth. How did you manage to capture that at such a young age?
My parents were involved in civil rights early on, and they taught us to live by the words of Dr. King, and they had this fierce belief that everyone was equal. Growing up in Ft. Wayne, Indiana, we would discuss the Vietnam war and Kent State and what was going on in the world around the dinner table. My brother called us when he got his head whacked because he was in a protest at Harvard, and my parents were completely supportive.

My parents wanted us to be fully engaged. I remember when I was 5, my dad took me to lunch at a diner one day. And there was this plate glass window, and I see this gentleman washing it and the way he was using a squeegee, this man was just an unbelievable artist. I was so excited and I said, Dad, do you see that man with that squeegee? And Dad said, “I don’t care what you do with your life, just do it as well as that man washing the window.” So that’s what I’ve tried to do.

From Ft. Wayne to University of Michigan, and then?
One of my earliest assignments was photographing the demolition of Poletown in Detroit, and then I went to South Africa in 1985.

No problems being a white guy in South Africa in the apartheid era?
In 1985, if you were white and you deliberately walked into a township, you were welcomed, especially when you had a camera around your neck. People were so desperate for the world to know the realities of their lives. They just wanted to be treated as human beings.

Have you ever had problems being an outsider with a camera?
On September 11, I took some pictures of the first group of firemen who were carrying a fallen colleague on a stretcher. One of the men was incredibly upset. Well, a year later, on the first anniversary, I got a phone call: “I’m the fireman who almost took your head off last year. I’ve seen your photographs everywhere, and I want to thank you for testifying what happened to our buddies.” I sat and had drinks with these firemen as they remembered their brothers. It was an incredible honor.

Do you know when a photograph is going to be big?
I had a powerful feeling when I shot the grieving soldier in the first Gulf War. We had been in a tank that had been split by a missile. It was one of those moments where time slows down. I don’t always ask if I can publish the pictures, but this was so raw, and the young men said, “Publish them.” However you feel about war, people need to know it is not a video game.

How have the people of Shenandoah reacted to the way you told their story?
We just took the film to them this past weekend; it’s been a 5-year project. The film finished, and the applause was kind of overwhelming, and one after another people stood up and said, thank you, you’ve given us the ability to heal.